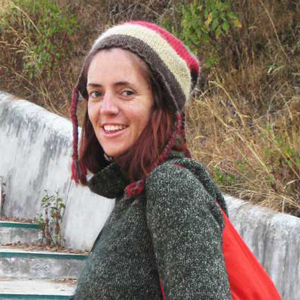 Michelle Taffe travels worldwide, taking in yoga and experiences wherever she goes.

I was born in Australia, but I identify more as a ‘global citizen.’ From an early age I knew that the world of normal jobs was not for me. By age 30, the longest I’d stayed at one job was six months (and that felt like a long time!).

As a result, I spent years figuring out a plan to combine work and travel into one fluid means of self employment, before finally becoming the Global Yogi in 2010. Since then, I share knowledge and experience of yoga and spiritual practice with yogis worldwide, and travel as much as I’d like.

At age 12, I had a pen pal who gave me my earliest glimpse into the magical and mystical land of ‘overseas’ (which is how Australians refer to the big wide world beyond our shores).

Then at 20, I could wait no longer to discover overseas for myself, so I dropped out of college, got a job as a kitchen-hand in a hospital, and saved up enough money to travel through Thailand with a boyfriend.

Since that first trip two decades ago, I’ve been to five continents, lived in many countries, and was very proud to receive my official residencia card after about ten years living on and off in Spain.

Tell us a memorable story from one of your travels.

Last year I went to Europe to get clarity on my next move, particularly how I could start including music into my work and life. For two weeks in the beautiful town of Siracusa, I worked on redesigning my website by day, and wandered the stone streets by night.

One evening I stumbled upon a vegan restaurant called MOON, where I met kindred nomadic spirits and saw a grand piano sitting in the bar area.

After asking, I played a song I’d recently composed. One of the owners told me she was touched by  the music, and asked me to come play in the evenings in exchange for dinner. This was a completely new experience for me—to earn something for playing my own music.

It was exhilarating. I was thrilled to learn that by being a bit braver and putting myself out there, music can be another outlet for me.

Most often I use a combination of my Global Yogi income, an exchange for accommodation at yoga retreat centers, and sometimes I do extra contract work as a writer / digital consultant. I also rent my flat out on Airbnb for a little extra money.

On a whim in 2013, I booked a ticket to Thailand to follow a new boyfriend, who was planning to be there for a month. I hadn’t been back to Southeast Asia since I started Global Yogi, telling myself I didn’t have the money to go. Of course, when my motivation was love, all obstacles became so insignificant that I didn’t hesitate for a minute.

With my partner I spent a week in a super luxury villa with a spectacular view over the ocean in southern Thailand as part of an exchange with Global Yogi. He then left for Europe while I headed for Bali to attend the Bali Spirit Festival as Media, planning to then follow him to Europe in the next weeks. While in Bali, I got a break-up email from my boyfriend.

And so began a longed for trip around Southeast Asia (one I had previously thought I couldn’t afford), which ended up as a six month spiritual pilgrimage. I had a truly amazing journey, one that took me from a fancy rock and roll yoga retreat to the most luxurious wellness spa I’d ever stayed in, to Buddhist monasteries in the jungle, to the Anahata Mystery School in the mountains of Northern Thailand, and to learning guitar from a nomadic rock musician on the waterfront of the beautiful city of Georgetown, Penang. And all of it was totally supported by Global Yogi!

It was an unexpected way to learn the universe really does support you in living your dreams (you just need to take the first step and book your ticket).

Window for long trips, aisle for short ones.

I was traveling in Bulgaria with a Bulgarian friend. We stopped in the charming and picturesque mountain town of Veliko Tarnovo to spend the night at a hostel. A few expat locals were hanging around, having beers, and a Japanese man was among them.

He had come to Bulgaria to study their folk music. I was surprised to learn he played the gaita (a Bulgarian bagpipe) and spoke fluent Bulgarian! The fact this man had followed his passion to a small town in one of the economically poorest countries in Europe impressed me. It takes strength to follow such a dream.

Never forget to pack a torch.

Well, Americans call it a flashlight. Either way, pack it—you never know when you might be caught out in the dark in the countryside with no moon.

I’ve been wanting to return to India since my first trip in 2009, so I’m going head there and check out what is happening in the yoga scene.

Stay up to date with Michelle at  The Global Yogi.