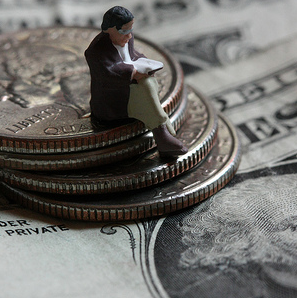 Note: this is a modified excerpt from the Unconventional Guide to Working for Yourself. This week I’m staying in one place and working on my book.

Have a great Thursday!

Since I presented a negative view of Google Adsense in 279 Days to Overnight Success, I should be fair and tell you I wasn’t always this critical. There are valid uses for Adsense (in particular, when the placement of the ads is not overly intrusive), and if you have any sites with relatively high traffic, putting Adsense on them can be an easy way to generate passive income.

In 2005 I attended a quick weekend conference in Chicago. It’s probably not unusual for most people to head to the Midwest for a conference, but at the time I was living in Liberia, West Africa, so in fact it was quite a trip. In one of the first sessions I heard a speaker discuss creative uses of Adsense ads as a secondary goal for site visitors.

At the time I was part of a group that favored the use of traditional landing pages, where the primary goal is to acquire site visitors’ email addresses in hopes of selling them something later — but at least 60% of the visitors were not a good match. In my case, I was paying up to 50 cents each to Google for those visitors to come to a site, decide it wasn’t for them, and hit the back button.

Fifty cents over and over for someone to disappear right after arrival really added up quickly. Many of the visitors did sign up for email updates and became customers later, but because of the high percentage of people who left without leaving any contact details, I was essentially paying a 40% premium on prospects.

The brilliantly simple advice I heard at this conference was to use Adsense as a secondary goal, for all of the people who didn’t want to get the updates or otherwise continue the relationship. With this setup, you place Adsense ads at the top of the page in hopes of capturing people before they hit the ‘back’ button. The idea is that Google will serve relevant ads based on the content of the page, along with whatever term they were searching for. When visitors click one of the keywords, they go straight to Adsense-sponsored Google results, and the site owner who sent them there gets paid.

Until I understood this, I had little interest in Adsense because I didn’t have high-traffic sites, didn’t have a blog, and otherwise really had no use for it. But once I understood the concept of a secondary goal, everything changed. I still kept the primary goal of my landing pages—to get people to join a newsletter—but with the Adsense ads at the top, I now had an alternative for the ones who didn’t.

This eventually allowed me to recoup about 30% of my average ad cost, which was effectively a 30% cash rebate since I had been paying for 100% of the cost prior to figuring this out — but it all started with $1.26 in Brussels, Belgium.

In Between Jet Lag and Luxembourg

On my way back to Liberia from the conference, I had a two-night layover in Brussels, the major European gateway to Africa. Thanks to Priceline and travel hacking, I was able to stay at the fantastic Renaissance Hotel for just $40 a night. This hotel normally goes for €199, and has a nice business lounge that you can easily sneak into by taking the stairs… not that I would know anything about that.

On the second day of the layover, I set out in the morning to visit Luxembourg, a small country about three hours away by train. Before I left, I spent an hour setting up an initial test of the alternative Adsense strategy. I wasn’t sure it would work, but I knew it was at least worth a try.

After setting up the test, I took off for Luxembourg and enjoyed walking around the busy streets for a few hours. Returning to my hotel in Brussels later that evening, I eagerly logged on and checked the stats.

The Google Adsense page finally loaded, and I saw that I had made a grand total of $1.26. That’s right, a buck and a quarter had trickled in via 10-cent and 25-cent denominations throughout the day as visitors had clicked the links. The closer I looked at the data, the more I smiled.

I Could Not be Happier

I was thrilled by the small amount of money, because I was pretty sure I could apply the same strategy in other places and effectively scale up the $1.26 to $50-100 a day in completely passive income. Over the next couple of months, I did just that, eventually reaching a $120/day average for the better part of a year. This was essentially free money, since I did nothing for it and it reduced my overall ad cost.

About a year or two later, I moved out of that business, and I don’t do anything with Adsense anymore. But as far as I can tell from following the industry and closely watching other publishers’ pages, this strategy still works for many people.

I’d break down the pros and cons of this approach as follows:

Pros: It’s a very easy way to make money, if you have good site traffic and many visitors who tend to quickly leave your site after arrival.

Cons: It can also be like crack cocaine, because once it works, you will be tempted to plaster it all over your site and disrupt readability. (Don’t do it!) Also, Google is temperamental and the rules can change at any time, so you’re not necessarily creating an asset that will be there forever.

These days, I’m much more interested in building a legacy project and writing full-time. If I was still involved in Google arbitrage, though, I’d look at applying a variation of this strategy to web sites that provided good information on specific topics.

For more, check out the Unconventional Guide to Working for Yourself. See you next week!

Image by Great Beyond