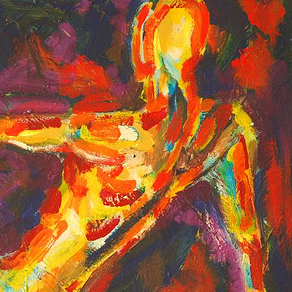 Paul was an artist, painting in several mediums and styles. He lived in a Northwestern city known for its love of the arts, if not always its ambition.

As Paul grew up, his family and teachers encouraged him to pursue art as a career instead of just a hobby. Paul was not especially organized, as we shall see, but this idea suited him well.

What Paul lacked in motivation, he made up for in talent. During high school he was always the best artist of the class. He managed to attend college on a partial arts scholarship that left him plenty of time to paint, but other things kept coming up. When he took the time to complete his work, he was the star student. When he slept in or underwent long periods of “artist’s block,” however, he lagged behind.

Paul was recruited and highly encouraged to enter local art shows, but felt put off by the application process. Deadlines! So many forms! A $20 application fee!

He complained about these things to other local artists, who somehow managed to meet the deadlines, complete the forms, and cough up the fees. “What a waste of time,” Paul said. After the shows, the other artists talked about how they had been a major source of income and commissions, bringing many of them a month’s income from one weekend. Paul said they must have been lucky.

In fact, luck and fate were the recurring themes in Paul’s limited career. When something went well, he attributed it to his skill and talent; when something didn’t work out, he blamed others. The art world was a “scam,” he said, with no way for new artists to break in. “Being an artist shouldn’t be about answering your email,” he said to anyone who would listen. Some people thought that was funny—but no one bought any of his art.

Once in a while, Paul managed to overcome the administrative handicaps and enter an arts fair or city festival. There were other artists there, of course, but Paul stood out—he had real talent and attracted a crowd of onlookers. When people asked where they could find his work, however, he had no answer.

A while back he had seen another artist with business cards. “Those are nice,” he said. “Where do you get them?”

“Oh, it’s easy,” she told him. “You just go to this site, upload your images, and place the order.” Paul liked the idea, but never got around to doing it. He finally decided that business cards weren’t for him. After all, he was a painter, not a businessman.

Paul’s website, which he had made during an assignment in college, was similarly elusive. It included a lengthy “artist’s statement” that went on at great length about Paul’s philosophy without saying much about Paul himself. There were no prices on his site, or any info on how to pay him if someone liked his work.

Yet, because Paul was so good, several buyers eventually found him anyway, offering an average of $2,500 for an original painting. Paul accepted the commissions but never got started—there was always something else to do.

Frustrated, Paul finally realized what the missing piece was: a higher-level art degree. Yes! That was it. He ordered glossy catalogs from East Coast MFA programs, dreaming of a place where his talent would finally be recognized without the need to carry business cards.

The debtload for the programs was astronomical—more than $30,000 a year for tuition alone, not counting supplies, housing, or food. Many students began the programs and never finished, and many students who finished never actually worked in art. But Paul knew if he could get his MFA he would be “set” for life. Because the art world was a scam, this degree would secure his entry among the gifted few. If only he could get into the right program, three years and six-figures of debt later, all would be well.

By some miracle, this time Paul was only a few days late on the deadlines. Since he wouldn’t need them anymore, he canceled the commissions he had never started. With 90 days until the news of his applications arrived, he settled in to wait. The future was bright. Wasn’t it?

Creative Ways to Succeed in the Knowledge Economy

To Succeed in the New, New Economy, Don’t Mail It In

Get Your First 1,000 Email Subscribers
© 2023 The Art of Non-Conformity | Site by Bytegrow Technologies