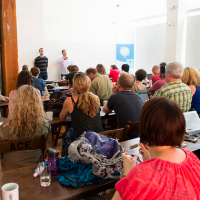 This Summer: Hack Your Book, Learn the Science of Happiness, & Become a Financial Badass

Link: WDS 2016 Academy Registration Is Now Open to Everyone!

Every year since 2011, I've produced and hosted an global gathering known modestly as the World Domination Summit (WDS). More than 10,000 people have participated in WDS main stage events, and starting in 2014 we expanded to feature half-day workshops known as Academies. Registration for Academies is now open to the general public, and this year we have something special: an all-new experience called WDS Connect. When you register for WDS Connect, you'll get access to hundreds of meetups and special sessions that aren't open to the general public. You'll also get access to one complimentary Academy of your choice. Read More