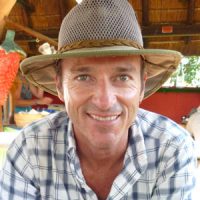 “My Car Is My Home, the Planet Is My Backyard”: On the Road with Bruno Caumette

For almost two decades, Bruno Caumette has made his home in a Toyota Land Cruiser. He's been around the world once and is currently working on his second voyage. His stories are touching—and his photos are incredible.

I was born in France, but by now I’ve spent as much time outside of my birth country than in it. In 1998, after working for fifteen years, I bought myself an old Toyota Land Cruiser, converted it into a home on wheels, and set off on the road. I was heading for Africa, but beyond that I didn’t have a plan, a timeframe, or even money. Fourteen years later, I’d returned to Africa—after having traveled overland through places like Afghanistan, Mongolia, Siberia, Korea, Alaska and Patagonia—inadvertently completing an around-the-world trip. I’d driven over 400,000km (that’s 248,548 miles) and taken three ferries, but never once hopped on a bus, train, or plane. Now I’m three years into my second around-the-world trip. It’s no longer a trip, it’s a lifestyle. My car is my home and the planet is my backyard.