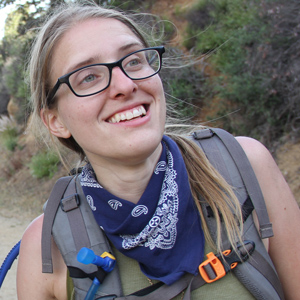 Drought is on the minds of every Californian these days, but Samantha Bode took the water shortage a step further. First, she began to think about the water of Los Angeles itself—where it comes from, and why.

This thinking led her on an exciting journey.

My name is Samantha. This summer, I’m backpacking all 338 miles of the Los Angeles aqueduct, from Owens Valley in Inyo County to Upper Van Norman Lake in Granada Hills.

The city of LA gets most of its water from hundreds of miles away, often leaving ecological destruction in its wake. On top of that, California is experiencing its worst drought on record, and people are not conserving water at the rate they need to in order to preserve this resource they need to live.

We’re taking the journey and making a documentary, The Longest Straw, to raise awareness of water importation and management. We hope to encourage people to form a personal connection with their water by seeing where it comes from.

Years ago, I took a trip to Mono Lake, a gorgeous saline soda lake north of San Francisco and east of Yosemite. I saw an LA Department of Water & Power (LADWP) vehicle, and was curious why they had a presence over 300 miles from LA.

From there, the conclusion felt natural: I had to educate people on where their water comes from. People know about the drought. It is on the lips and minds of every Californian. But when you hear about the drought on the news, or over the radio, or through the internet, there’s a wall disconnecting you from the water.

I don’t need to know everything about the drought. I don’t need to know the exact science behind water. What I am trying to do is help people connect the dots between their water and the source of that water. After those dots are connected, it will be easier to see the bigger picture.

Scientific facts don’t raise much awareness, but seeing a freakishly low reservoir, listening to stories of people affected by dry wells, feeling the hot air that is void of precipitation – that is what gets people connected and interested.

You’re right in the middle of your quest. What’s a typical day like for you as you prepare?

Both Angela, my co-producer, and I work “normal” jobs. Between those and pre-production, which is a fancy way of saying prep-work before actually taking the trip, we basically work two full time jobs.

On any given day, we do one or all of the following for the film: field emails, draw maps on Google Earth, write blog posts, keep up on our social media, plan interviews, edit video, and plenty more.

Pre-production is exhausting. But, we know that it is worth it. Angela and I know that what we’re doing has the potential to change people’s perspective, and rekindle that dying relationship with their long-time lover, water.

Meeting members of the Big Pine Paiute, a people who once lived on the land that the aqueduct now passes through. Their perspective on water usage in the region is unique in that it stretches back thousands of years.

We lucked into attending Fandango, an inter-tribal event for American Indians throughout California and the Southwest. While there we saw traditional dances of the American Indians of the Owens Valley and Mono Basin, and share in the traditions of these people.

We also went on a water tour of the Big Pine area with Harry Williams, a member of the Big Pine Paiute Tribe. He showed us the ancient irrigation ditches that the Paiute people used to irrigate the valley long before the ranchers and LADWP came along. He told us of the great relationship that the Paiute people have with water, living in an arid place yet still being able to survive and thrive.

Something he said still echoes in my brain: “The Bristlecone Pines are some of the oldest living things in the world. They have tree rings, and their tree rings show that in 14,000 years we’ve had 10-year droughts, 20-year droughts, 50 and 80-year droughts, and 200-year droughts, much like this three-year drought. So California is suffering, sure, but I think this ain’t nothing compared to what could happen.”

That’s powerful, and very telling of the disconnection most people have not just from their water, but their natural surroundings, too.

What are the costs associated with planning and producing this journey?

Beginning to end, production of the feature film will cost $50,000. Some of those funds will be raised via our Indiegogo campaign. We’ve also received product donations from our sponsors, Adventure 16, Steripen, Whole Foods, and GRaid.

But just as important has been the support from people. We’ve met friendly activists who work in fields related to the aqueduct who have agreed to appear on camera and put us in contact with other people who have helped our seemingly insurmountable project possible.

It can get discouraging at times to think about how long in the making this film has been. We began working on The Longest Straw in November 2013, and at the time, we thought we’d be done within a year. Here we are a year and a half later and we just began the backpacking journey.

Every time I’ve felt discouraged or lost in the process of this film though, a new person would come up to me and tell me that The Longest Straw is already strengthening their relationship with water. “Sam, I thought about your film when I was in the shower this morning, and decided to cut it a little short,” or “Sam, I thought about your film while my husband was washing dishes, and I smacked him because he was leaving the water on too long.”

Also, every day we get a little closer to leaving. Watching this project come together has been so much more rewarding than rushing through the steps, especially because the project that is now coming into fruition is so much richer than what we’d pictured at the start of this process.

What has surprised you as you’ve worked on this film?

The people of Los Angeles really don’t know much about where their water comes from, and a lot of them don’t seem to care. But for the people in Inyo County and the Mono Basin, the aqueduct is a part of their everyday lives. They’ve had to live with the repercussions of our water use for over a century.

I feel like if the people of Los Angeles took a little time to actually know where their water comes from, they would come to a better appreciation of that source, and begin to work with the people in the Owens Valley and Mono Basin to ensure the future preservation of that water for all.

Unlike a lot of film crews, ours is almost entirely female! We didn’t intentionally seek to have a principally female crew – instead, amazingly talent people we already know reached out and expressed an interest in participating in the film, and only once we began filming interviews did we realize.

That said, we love to have so much girl power on our side!

So what happens next?

The trip itself! We’re hiking now.

Surfing the Entire West Coast of the Americas: A Quest of Love and Discovery
© 2022 The Art of Non-Conformity | Site by Bytegrow Technologies