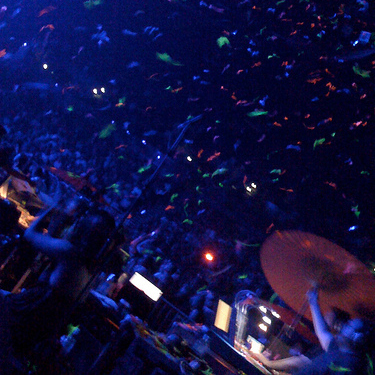 I read a good story in this book about Wolfgang Puck instructing his staff to treat every customer interaction as if it was the first and only chance they had to make a good impression. The concept was: “Every night is opening night.”

Every night, in other words, let’s act like this is our one big chance where everyone is watching and everything must be performed at a high standard. Let’s pretend it’s a concert or a play, and this is our only time to shine.

I liked the analogy. But I also thought … how do you do that? What does Opening Night look like, and how do you keep it from getting old?

Opening Night usually involves a fair amount of nervousness and hand-wringing. The stakes are high and performance is untested, so you’re worried—which is a good thing. On Opening Night, you want to be respectfully nervous. Not scared to death, not paralyzed into inaction, but just jittery enough that you pay close attention to each detail.

Opening Night doesn’t require perfection, because small things often go wrong no matter how much you’ve prepared. Instead, it requires full engagement. When I went on book tour, the talk I gave on the real Opening Night in New York wasn’t my best talk. I got better as I went along, changing the order of things (and learning to say less) according to how different audiences responded. Yet I tried to maintain a sense of each gig being Opening Night everywhere I went, even if it was the tenth stop in ten days or a small town that I wasn’t otherwise excited about.

I think I got it mostly right about 50 times out of 63. On a few of the off nights, something went wrong that wasn’t my fault—a bad room setup, technical difficulties, not many people showed up, etc. But there were also a few times, mercifully few, where I felt like I lost the magic due to no one’s fault but mine. I went away kicking myself those nights, not just for screwing up the gig, but also for failing to be fully engaged.

Part II: How to Keep Opening Night from Getting Old

The big problem with trying to live with a continuous Opening Night policy is that we often get bored. Once we know what to expect from any given activity or performance, the magic + challenge gradually wears off.

This classic commencement address from Steve Jobs offers a remedy:

When I was 17 I read a quote that went something like “If you live each day as if it was your last, someday you’ll most certainly be right.” It made an impression on me, and since then, for the past 33 years, I have looked in the mirror every morning and asked myself, “If today were the last day of my life, would I want to do what I am about to do today?” And whenever the answer has been “no” for too many days in a row, I know I need to change something.

Remembering that I’ll be dead soon is the most important thing I’ve ever encountered to help me make the big choices in life, because almost everything—all external expectations, all pride, all fear of embarrassment or failure—these things just fall away in the face of death, leaving only what is truly important. Remembering that you are going to die is the best way I know to avoid the trap of thinking you have something to lose. You are already naked. There is no reason not to follow your heart.

Thinking about these questions also helps with the long-term problem: what do you do when you’re tired of the life you’re living. When—as Steve Jobs put it —you look in the mirror too many days in a row and say “No, I wouldn’t want to do this if it’s my last day.”

At that point, I think the only option is to make some changes. You might be able to suck it up when you don’t feel like it and manufacture Opening Night once in a while, but I don’t think you can do it every night. Besides, why would you want to? As Jobs said in the same address, “Your time is limited, so don’t waste it living someone else’s life.”

No, this is why you have to place yourself in front of something you’re excited and thrilled about, while also being a little scared of something going wrong. You might drop the plates (crash!). You might break a string or lose the timing with the drummer. But you must maintain the nervous energy that comes from full engagement, and if you don’t have it, something needs to change.

Is it Opening Night over there?

The Land of Too Much

You Are Incredibly Rich