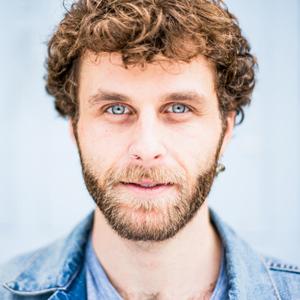 What’s it like to live and work as a nomadic, traveling musician who relies on crowd-sourced support? We found a guy doing exactly that. Here are his stories from three continents and counting.

I was raised barefoot and wild on the tip of South Africa, in a little village called Scarborough. My early days were spent in my father’s guitar making workshop as he crafted some of the world’s top custom guitars.

My boundaries were the ocean and the mountain, and my whole life has been shaped by those first years of raw nature and unfettered adventure.

Coming from a long line of musicians, I have always been enamored by aural explorations, particularly lyrics and the journeys they can take me on in my heart and imagination. I’m now a modern troubadour and singer-songwriter, traveling the globe and sharing my music with the communities I meet along the way.

I recently discovered that my mom’s lineage goes back to shamanic, nomadic Russian tribes. My father was born a storyteller, and was a bearded wandering gypsy in the late 60’s and 70’s. With troubadours on my dad’s side and nomads on my mom’s, I didn’t have a chance of settling down!

I grew up listening to the tales of my dad’s various adventures. He studied yoga in India, played music in bars in Spain, worked on dubious projects in Australia, and drove VW Kombis (Microbuses) all over the world.

Those colorful stories ignited an unquenchable thirst in me to also explore this globe we all call home.

Currently, I’m supported by a community of patrons of pledge monthly amounts to me through the site Patreon. While traveling, I play donation-based living room concerts and sell my music on a “pay-what-you-want” basis.

I don’t have much money, but I have one hell of a rich life.

What have you learned throughout your travels?

Those who have the least often offer the most.

I have been given a place to stay by an unemployed Senegalese lawyer in Paris, fed a three-course meal by a poor family in a tiny apartment in a French village, and given money and food by a Spaniard who saw me playing guitar under a tree.

It makes me wonder if those with less in the material sense are more often willing—and excited—to pause and connect with others. There is little as valuable to me as generosity, taking one’s time, and sharing with the global community.

Tell us more about one of those encounters.

3am, Paris. There are 20 Euros left between me and my best friend, and we’re attempting to sleep in a doorway.

A tall, gangly, African man steps off a late-night bus and comes over to us. He asks us something in French, and then tries again in English.

This kind man not only gave us the keys to his house, but showed us places to busk on the street, taught us how to jump on the subway for free, and shared communal Senegalese meals with us.

I will always remember this incredible example of human trust and generosity.

What’s another story you have up your sleeve?

It was midnight when I stepped off the bus and into a brand new city, a city I’d heard tales of and always dreamed to visit. San Francisco: mysterious and, in that moment, potentially threatening.

I had $100 to my name, and no idea of what would happen next. Having stood in similar situations before, I was more excited than concerned, alive on the edge of my experiences, pushing what I considered comfortable. Still the tasted air was sweet—perhaps because it was the only thing I could expect to taste for free.

I turned in a circle, deciding which direction to head next (and really, trusting the universe to guide me). From the dark shadows between two buildings, a pair of men walked toward me. Details appeared as they walked closer. One of them was wearing a brown monk’s habit, with silver chain and Jesus hanging eternally from his cross around the man’s neck. I assumed they had come from a costume party.

I moseyed over to meet them and greeted them with, “Hi, what are you guys up to on a night like this?”

They replied that they were monks from a monastery and they wandered the streets at night speaking with anyone who needed their assistance. Good timing, I thought. I asked these kind gentlemen where I could locate the nearest hostel (having no other ideas as to where I should head). They gave me some general directions and I was on my way.

Very long story short, I ended up sleeping on the hotel floor of an Australian man I met while crossing the street. The next day I spent 1/7th of my $100 on a meal at an amazing raw-food restaurant, where I met a man named Greg. He had an RV, and in exchange for my buying his self-published book, he let me sleep in his RV that night and invited me to stay the next night.

While I was waiting to meet Greg the following evening I noticed a man digging in the trash. I love dumpster diving and so I asked him if he’d found anything useful. We struck up a conversation and he offered me a spot on his apartment floor, where I stayed for the next week. I have been back to see him several times and we’ve become great friends. When I left him that first time I gifted him with a chili plant, and he gave me a 100-year old copy of Alice in Wonderland, which he’d found in the trash!

My San Francisco experience was one of many which reinforced my belief that life wants us to succeed and to be taken care of. If we trust our gut, stay sharp, go with the flow and remain humble and curious, life will invariably bring incredible moments and people into our world.

I’m currently planning my next full-length album to be recorded this year in London, which I’ll pay for with crowdfunding. In July, I’ll be exploring eco-villages in Europe and learning about the practicalities of sustainable community living.

The Art of Unplanned Travel: On the Road with Carole Rosenblat

“I am capable of more than I imagined”: On the Road with Elizabeth Glanzer

The Five-Year Road Trip: Two Adults and Two Teenagers Live Full-Time in an RV
© 2023 The Art of Non-Conformity | Site by Bytegrow Technologies