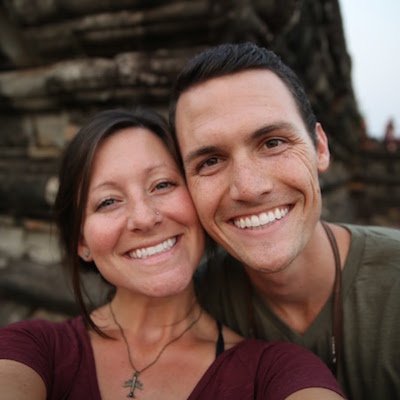 Nate Buchanan and his wife Kara had been talking about traveling for years. They finally stopped discussing and started planning. Before they left, they travel hacked their way to 1.8 million frequent flyer miles, which they’re using to travel to 100 countries.

My name is Nate. My wife Kara and I are from Nashville, Tennessee. But right now we’re currently traveling the world full-time using the 1.8 million frequent flyer miles we saved up before we left.

When we originally decided to leave, it was only supposed to be for one year. Now we’ve changed our goal: to vlog our way through 100 countries by 2019 (we’re currently at 40).

I had been mildly obsessed with the idea of full-time travel for a few years. But in January of 2015 we were sitting at Dairy Queen, and something was different about this conversation. We were seriously discussing what it would take to make it a reality, and not just dreaming about “what ifs.”

It’s so easy to discuss theoretically. Reality is, there’s never an easy time, and we finally realized that there would never be an easier time than right now. We don’t have kids, we rented an apartment, and both of us were in a position where stepping away from our jobs wouldn’t be the end of the world. We finally decided we would take 2016 to travel full-time and see as much of the world as possible before we settled down.

I will always remember sitting at our kitchen table spinning a globe and asking ourselves, “Where to?” We left for Japan on January 10, 2016, and we’ve been on the road for over 9 months with no plans of stopping anytime soon!

Racking up the points

At the beginning of 2015, before we decided to travel for a year, we’d saved up over 500,000 miles and points between several different programs. But then we got serious about earning miles after making the decision to take our trip. Between the two of us, we earned over 1.2 million miles and points in 2015.

First, we earned over 725,000 miles and points from credit card sign-up bonuses.

A few of the credit cards with sign-up bonuses:

Second, I own a custom apparel and promotional products company and purchased everything on my AMEX Starwood credit card. I earned around 200,000 Starwood points from business spending in 2015.

The third and most unique way I earned miles in 2015 was from a two-week, 92,000-mile mileage run. I lived in airports and on airplanes for two weeks while flying back and forth 3 times between Sao Paulo, Brazil, and Hong Kong. During the trip I slept on airplanes 14 of the 15 nights I was gone. It was INSANE.

Thankfully, I was flying Business Class due to a mistake fare, so I was able to fly in luxury. This mileage run netted me 313,000 American Airlines miles.

We started the year with almost 1.8 million miles and points, and after visiting over 27 countries this year we still have over 800,000 left. I thought we would have burned through the majority of our points at this point in the year, but we’ve been very strategic about our redemptions.

Since we’re planning to visit 100 countries, we’re trying to stretch our points as far as possible. We’ve done this by flying budget airlines and taking other modes of cheap transportation when the opportunity arises. At this point, we mainly redeem our frequent flyer miles for long-haul flights where the redemption value is at least $.02 per mile.

In terms of money, we originally saved up enough money to keep us on the road for a year (the initial plan). About half way through the year we set the goal to visit 100 countries. Since then, we’ve been working to turn our YouTube channel into a business that will sustain our travel for the next few years.

We’re really close to breaking even between our monthly travel expenses and the revenue we’re earning from income streams related to YouTube. We’ve documented our entire financial journey from the moment we decided to monetize our YouTube channel, and we provide our monthly income and expense report to our email list every month.

Beyond the points – sharing our journey

One thing we didn’t anticipate was how rewarding it would be to share our journey on YouTube. This started as a way to capture the memories from our trip and share them with friends and family. But because of the positive feedback we received early on, we continued publishing videos on a daily basis.

Little do they know the impact they have made on OUR lives, too.

Now we feel like we have a much bigger purpose, and we’re more motivated than ever to share our journey to 100 countries.

“If you’re going to spend the money anyway, you might as well get something out of it.”

Traveling in a Financially Sustainable Way : On the Road with Nora Dunn
© 2022 The Art of Non-Conformity | Site by Bytegrow Technologies