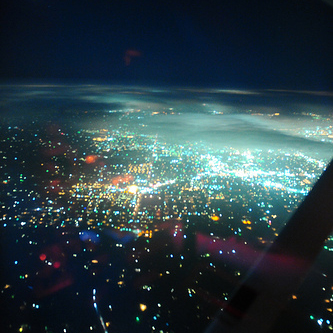 I think it was Pico Iyer who said that every flight to Calcutta arrives at 3am.

Whoever it was, they were right, and it’s not just Calcutta—all over the world, travelers are coming and going at odd times. In some places, the arrivals and departures happen mostly at night.

Technically, a red-eye flight refers to an eastbound flight that leaves in the evening of the local time, flies several hours across several time zones, then arrives in the early morning local time on the other side—thus causing most travelers to lose a night’s sleep. An example would be SFO-JFK, or YVR-IAD. You leave at 11pm, you arrive at 6am—but you’ve also lost three hours along the way.

More commonly, people tend to refer to any overnight flight as a red-eye. If it’s 4-6 hours long and leaves in the late evening, thus ensuring I won’t get a real sleep cycle, and it’s some kind of morning when I arrive on the other side, I call it a red-eye too.

When traveling in the U.S., I prefer to avoid these flights whenever possible. Unfortunately, I lack the superpower of not needing to sleep. I can make it the next day, amped up on coffee and travel adrenaline, but if I don’t get a nap at some point, the immediate future bodes poorly. Thus I prefer to fly during the day, usually connecting via Dallas or Chicago in an easterly direction.

When roaming the world, you have no choice about night flights. Many flights, especially to remote places, operate only at erratic, nighttime schedules, often planned that way to account for connections, cheaper gate slots, or the limited number of airports around the world that allow for 24-hour departures.

I’ve flown out of Dubai at least five times, in at least three directions—and every flight has left between 1am and 4am. Walking through the terminal, a snoring brigade of sleeping travelers lies stretched out on the floor, looking like it has been infected with Nyquil. Tourists with backpacks doze next to migrant Pakistani workers on their way home. I always wonder if many people snooze through the departure of their flight, especially since gates don’t open until an hour or so before boarding time.

While I’m frequently sleep-deprived, I’ve never actually slept through the last call for boarding. Every time in DXB I eventually make my way to the gate, go through the (always extra) security check, and manage to board before it’s too late.

One time I was flying British Airways First Class, but my scheduled flight wasn’t until the next day. I showed up early and tried to change the ticket, waiting in the cramped landside area for hours for staff to arrive. I enjoyed the irony: a First Class ticket to London, but here I wait. I know that waiting is good for me; a traveler must make his peace with long stretches of solitude.

It’s not all bad: another time I was in Doha on Qatar Airways Economy Class, but I successfully snuck into the premium lounge. Free merlot and vegetable samosas! What a night. I actually slept on the four-hour flight to Columbo, dreaming of the 100th country I would soon arrive in.

When leaving Africa, flights are timed to connect to various European cities and over to North America, so it will almost always be a night flight. Going the other way, Africa is a destination rather than a hub. Nobody connects in Africa—well, nobody except people like me. I show up as the only guy in the transit area of airports like Dar es Salaam or Harare, looking for a staff person to come and open the desk. “You’re transiting?” they ask, surprised.

When the time comes, you finally board the flight with the other zombies and settle in. Alas, sleep is brief: we still have a safety video, takeoff, some sort of drink service, and then… three hours to go.

Forget about the laptop; night flights are no time for work. Flying at 2am is a time for napping, and if that’s not possible, for thinking about the world and your small place in it. Put on your earbuds and see what Air Zimbabwe and the shuffle feature on your iPod decides to send your way.

The best night flights arrive at their destination just as the sun is just coming up—you look out the window and see the world coming to life. Arriving early when it’s still dark, as my YVR-JFK flights tend to do, feels like cheating. I don’t want a 4:45 arrival; just give me one hour more and we’ll call it good.

I walk toward immigration (usually quick in the early mornings) and to baggage claim (always quick, since I never have a bag). “You’re now entering the MOVING SIDEWALK,” a robotic voice tells me over and over. Is this Brussels? Amsterdam? Am I back in the States? No matter. The janitors are finishing the late shift and heading for the bus.

I’ll figure out transportation later; for now, I’m just saying hello to another morning in another city. It might take a while, but I’ll find my traveler’s high sooner or later.

Keep going, traveler. All good things eventually come to an end, but not yet. You have miles to go before you sleep, and you’ll be glad you made the trip.

I’m on the road to Mauritania and beyond for the next two weeks. Comments will return with Monday’s post.