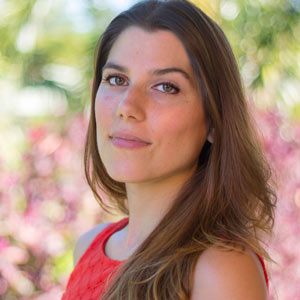 One day, Kristin looked around at the life she thought she wanted—the job, the relationship, the stuff—and realized her heart yearned for something else. So she decided to do something big: travel the country in an effort to go to every vegan restaurant.

My name is Kristin Lajeunesse. I’m a 32-year-old, self-employed business clarity coach and marketing strategist for small business owners. I work from home (or rather, my computer), and enjoy picking up and moving every few months or so to explore new locales.

My quest was to promote and share vegan restaurants and eateries from around the world. Between October 2011 to August 2013, I lived in a van and entirely off of donations in an effort to eat at and write about every vegan restaurant in the United States. I called my quest Will Travel for Vegan Food.

What inspired you to embark on this quest?

Everything about my life was going according to plan. I had undergrad and graduate degrees, “the” job, lived in the great city of Boston, and had a comfortable relationship. But something still felt off. That’s when I stumbled upon the likes of Chris Guillebeau, Tim Ferriss, and Marie Forleo.

I hungrily read their books, scribbling notes and daydreaming of becoming a game-changer. Someone who did something. I made myself a promise that I too, would shoot for the stars.

The idea for Will Travel for Vegan Food hit me like lightning. Once second, I had no idea, the next second, the idea flashed before me. I felt awake. Excited. Alive. I also felt terrified, but I knew I had to do it.

My mom flew to Missoula, Montana, to join me for a week on the road. We had made it to Salt Lake City and just finished a great meal with some new folks who had reached out to me via my website. On our way out the door, I decided to wait and speak to the owner and let him know I’d be writing about his restaurant on my blog.

A middle-aged woman was waiting for a take-out order next to me. She noticed the stickers in my hand and asked what they were. I showed them to her and told her very briefly about my trip. Without a moment of hesitation the woman said, “That’s incredible!” She dug into her purse and pulled out a $20 and handed it to me. She said, “What you’re doing is so important and I want to support your mission.” I was speechless, though finally found some words of thanks before we parted ways.

I looked up and saw my mom a few feet away. She had just witnessed the whole interaction and was in tears. “Oh Kris,” she said. “That was amazing.”

That moment still makes me cry when I think back on it.*

How did you pay for the costs associated with Will Travel for Vegan Food?

The trip was funded by my personal savings and crowdsourced funds via Kickstarter where I raised a little over $12k.

Unfortunately I severely underestimated how much a trip of that magnitude was cost. After all was said and done, the formal journey of traveling the country and eating cost about $100k!

Tell us about how you dealt with a low point in your quest.

I was in Las Vegas for the first time. I’d be celebrating my 30th birthday with a group of people I’d never met before who had heard about my quest and arranged a really lovely birthday dinner. It should have been the highlight of my trip. But I was extremely depressed.

I’d gained about 15 pounds, and I was sad to be without family or friends that weekend. I had a great run on the journey so far—I met so many wonderful people, had incredible experiences, saw amazing sights, and had profound moments of awakening. But my body was taking a turn. It was exhausted from overeating, little sleep (living in the van meant that I’d often have trouble sleeping or would wake up to nightmares of someone trying to break in while I slept), and from constantly being on the road.

It all added up and I just felt like I couldn’t go on.

On my last day in Vegas I was calculating the number of restaurants on my to-eat-at list for my upcoming jaunt through California. There were more than 200. I burst into tears and called a friend in Texas.

Later that day I drove the van to San Diego, left it there, and flew to Texas where I spent the full month of August chilling out. The break wasn’t stress-free, though. I had a lot of catching up to do and I spent most of the time writing. But it was nice to be in the company of friends in the evening and on weekends, as well as getting a lot of sleep.

I’m happy to report I returned to San Diego and my mission. Not only did I accomplish my goal (547 restaurants in total!) but the journey completely changed my life. I’ve had the most amazing career opportunities pop up since then, have been traveling near-full-time since the trip ended and even just released my first-ever book: a traditionally published memoir about the road trip.

But most importantly, I learned SO much about myself. I learned about who I was, and who I want to be in life going forward.

What did you learn about you?

Before my trip I was highly dependent on other people. I was in back-to-back romantic relationships from the time I was 16 until the day I left for my trip at the age of 28. I’d gotten used to making decisions while considering what other people might want or expect of me instead of what I wanted for myself. I realized that I hadn’t spent ANY time on my own. Through being somewhat forced into the trip alone I had no choice but to figure things out on my own.

It was the greatest gift.

What has surprised you during Will Travel for Vegan Food?

I was surprised to learn how much I actually enjoyed spending time alone—I thought it would feel much lonelier. I was afraid to be alone at first. But once I learned that I had a choice in whether to feel scared or not, everything changed.

Being alone, I gained more confidence, I became more resilient, and found that there was a sense of power and pride in relying on just myself when making decisions about where to go, what to eat, or what to see and do. Plus, I found out I like going to the movies alone, and even enjoyed traveling through airports and in the van. There were no debates, I could just go on my own time and at my own pace.

Did you receive any support on your quest?

Tremendous amounts of support, yes! I attribute a lot of that to Facebook. There was more than one occasion during my travels that people reached out via Facebook to offer a couch to sleep on, a shower to wash up in, or to sponsor a meal. I’d say nearly half of the people I ended up meeting in person were from initial conversations started between us on Facebook.

Best advice for anyone thinking about taking a quest:

I grew up riding horses! Given my current involvement in the vegan movement many are often surprised to learn that I went to college for Equestrian Studies, and had spent all of my childhood and formative years riding, showing, and training.

I’ve struggled with my connection to horses since becoming vegan—it seems like a lifetime ago. But growing up with horses enabled me to learn more quickly about compassionate choices. I learned how to interact via subtle body language; I learned compromise (5AM mornings to prep for shows or skipping a dance at school); I learned how to teach and stand up in front of people and present (thanks to 4-H and giving lessons from about the age of 16).

Competing in horse shows from the age of 8 I had an early lead on understanding what it meant to be humble (both as a 1st place and last place competitor). The show ring taught me about engagement, poise, and how to hold things together when at any moment something could go wrong.

I loved everything about that time of my life and I believed it prepped me for this time of my life for sure. I do not ride anymore though I foresee horses in my future – perhaps in the way of a sanctuary one day.

My 2015 is dedicated to the promotion of the memoir. I’m also planning to spend some time finding clarity around my business models and modes of income. I find that it’s a constant work in progress. My next big quest is to land a TV hosting gig as a vegan food and travel expert.

Finding Comfort in Non-Home Surroundings : On the Road with Andres Zuleta