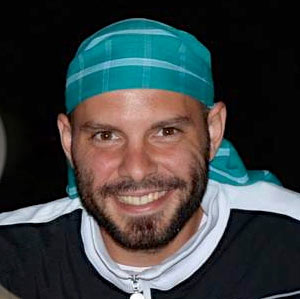 Former stockbroker Tomislav Perko says he’s nothing special: just an everyday guy who lost his job, and decided to take a different road in life—one that only costs him $10 a day.

My name is Tomislav. I’m a 30-year-old regular, everyday, normal guy from Croatia—one who every now and then tries to do something irregular, unique, and extraordinary.

Back in the day I was a stockbroker. Suit, tie, lots of money—that kind of lifestyle. Due to the financial crisis in 2008 I lost everything: money, career, reputation. Little by little, I started exploring alternatives to chasing my career and another promotion.

Then I realized that I should be gathering experiences and connections, not money and other tangible possessions. “Things” can vanish in no time.

I started traveling. Ever since I’ve been on the road, I’ve visited 5 continents, written and photographed my journey, made videos, held travel lectures—and done it all on less than $10 a day.

I actually never thought about traveling the world. I come from a pretty conservative country where everybody sees travelers as “those people that should do something useful with their lives.” Plus, I always thought that you needed a bunch of money to get you going.

But then, an “ah-ha moment” came, all thanks to CouchSurfing. I started hosting people in my apartment and had the opportunity to listen to stories of people traveling the world with almost no money, and in their eyes I saw something that I was missing – a spark. They all had faith that they were on the right track, even though they had no idea where the track was leading.

These Couchsurfers were more inspiring than any book or documentary. These were people made of flesh and blood, sitting beside me, talking to me. One man had hitchhiked from Germany to Iran; another traveled with his motorbike across the world; and an American told me of being away from his homeland for nine years. They made it sound simple.

I used what I learned from them and the rest is history. And the present. Maybe even the future.

Tell us a memorable story.

I did a round-the-world trip I named “1000 Days of Summer.” In three years of hitchhiking, couchsurfing, and volunteering, I had some of the most memorable moments of my life.

I got stuck on the border of Iran and Pakistan; I hitchhiked on a boat and sailed the Indian Ocean; I tried ayahuasca in the Amazon; and I hung out with the Maasai.

Here’s a bit of that last experience:

I sat talking with the tribe after dinner, sharing stories for hours for hours and talking about everything. Chief Sankale talked the most. I told them about Croatia – what life was like there, and the rest of the world. I tried to explain why people went to a tanning salon, to a gym, or on a diet. I didn’t manage to describe it well.

I asked the Maasai I was with if they thought that they were missing something; something they would take from us, people from the West. Their answer was – no. There were some things which would make their lives easier, but they were perfectly satisfied with what they had.

What would you do if you came to Europe on a road trip? I asked.

Their answer really made me laugh: We would go to the zoo and asked them to give us back our lions. Lions don’t belong to the zoos, their place is in the wilderness – our African wilderness. After trying to do this, we would try to do the same things with cows.

Other than lions, the Europeans were also taking cows from the peaceful Massai tribes. The tribe believed that all cows in the world were theirs. I stopped for a moment, not being in a mood for laughing anymore.

I tried to explain to them that wouldn’t be a good idea. They wanted to know why. I started describing the conditions in which the cows were forced to live in western world. I told them about the farms where cows (and also other animals) spend their lives in a space so narrow that they could barely turn around themselves.

But, why? – one of them asked me while the others were silent. I could sense the silence and the lack of understanding and the sadness. I shut up and changed the subject. I wasn’t sure they would understand if I told them everything. After all, I didn’t understand it.

– Are you up for an African Jacuzzi? – the chief asked me, starting to get up.

Two Massai men, two Massai women and I went to the spring of thermal water. We took off our clothes and got in.

I looked up and saw millions of stars on the sky.

How did you pay for your travels?

The most important thing is not to spend much. I average under $10 a day, and I do that by using alternative ways of traveling – for transportation I use hitchhiking, walking, car relocation; for accommodations I rely on CouchSurfing, camping, house-sitting, home exchange; and I don’t eat out, instead cooking for myself.

I earn money in three ways:

2.  I busk. I play the guitar on the streets, even though I’m not a musician.

3.  I found some normal jobs in rich countries. (For example, when I was in Australia I worked as a traffic diverter, and it took me 13 days to pay off 8 months of traveling.)

What have you learned while on the road?

One of the most important lessons I’ve taken in has been: learn, don’t preach; study, don’t teach.

Traveling is a humbling experience. I’ve realized how tiny and irrelevant I am, and I’ve had to give up everything I know and start all over. Everything I’d learned was based on where and how I grew up – but traveling taught me that different environments lead others to different conclusions.

If I were to go around the world with a firm attitude on how things should be and why, I’d be just another preacher who wants to spread his wisdom rather than expanding it.

I came to this conclusion quickly, when I visited the neighboring country of Serbia (with whom Croatia had an unfortunate war). All the people I met there were beautiful.

Aisle till I die! (Sorry, I listened a lot of Tupac when I was younger)

Tell others about what you see.

Share your stories and experiences, and show people how world can be a beautiful place. Let them know there are many good people in the world, distract them from all the bad news they hear in the media.

Send emails to your parents/friends/family, often if you can. Don’t forget that they do worry about you and that some of them think about you all the time, and you can make them happy with just few clicks from your laptop.

And the universal tip…

Do to others what you want others done to you.

My story is nothing special. It doesn’t take a lot of courage to leave it all behind. Most people could, if they really wanted to.

I’m currently in New Zealand, exploring this beautiful country, and working as an ambassador for HomeExchange.com.

The plan (apart from not having a plan) is to find a place to settle down for a bit, since five years on the road can be a bit exhausting. I’d like to write my second book and see where the future will take me.

Stay up to date with Tomislav at his blog or on Twitter @tomislavperko.