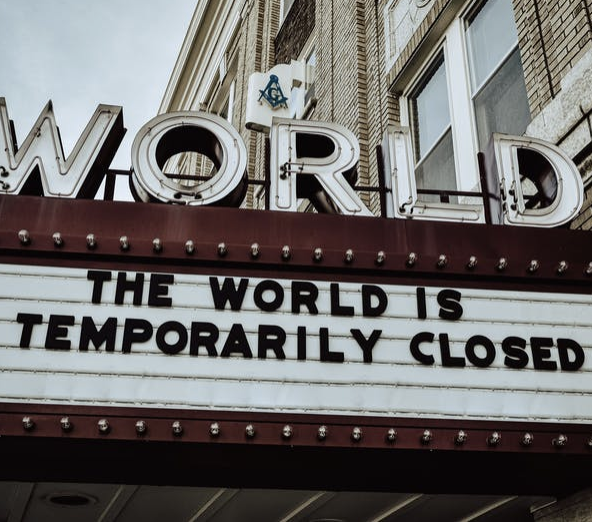 When we all went into this thing in March, I tried to remain as positive as possible. I still believe everything I said before, about how I want to come out of this time better than I was when it started, etc. We can only worry about what’s within our control. And of course, let’s try to be kind to one another.

But then the spring turned to summer, and the summer to fall (at least in my part of the world). And nothing really got better! Quite the opposite, in fact.

Now we’re all setting low expectations for standards of wellbeing. “Hope you’re hanging in there” is the new “Hope you’re doing well.” And let’s face it, lots of people aren’t doing well.

So, finally, I’ve come to the point of feeling defeated about the whole year—and I know it’s not just me.

Let’s get the obligatory disclaimers out of the way. In terms of circumstances, I have it much better than most people. My work doesn’t require me to be in any particular place, and I don’t have a boss to report to anyway.

Still—as I’ve said before, just because you’re successful doesn’t mean you won’t struggle. So I offer this truth to you now as well. If you consider yourself relatively well-off, at least compared to everyone who’s lost their homes from wildfires this week or, let’s be real, the one million people who have died from COVID-19, that doesn’t mean that your life is wonderful right now.

In other words, just because you haven’t lost everything doesn’t mean you have to be happy all the time. You have the right to feel sad, discouraged, anxious, or just depressed.

In my case, I feel all of those things to some degree now. I published The Money Tree in April, the same week that everything went into lockdown. That was … not great timing. (Unfortunately, in the world of publishing you can’t just “push it back a month or two”—these things are planned far in advance. But do please buy the book if you haven’t already. Everything helps.)

I had to cancel every stop of my 40-city tour, which was especially sad because it’s been a long time since I’ve done such a thing. I was really looking forward to getting back on the road and meeting readers.

So instead of going out and about, I went on YouTube, and Instagram, and Periscope (via Twitter), and did an average of five online interviews a day for several weeks. In my mind I was thinking, “Maybe this will be better than going to bookstores in different cities day after day.” After all, you can speak to many times more people online than in person, and those people can be from all over the world.

Well, an interesting thing happened. What I noticed (and I’ve heard the same thing from other creators) is that doing all the live streams was amazing at first. People were really excited to connect, even without much of a topic or lesson. So I thought, okay, maybe this is the new way forward.

But then, over time, the numbers went down, the engagement decreased. People stopped caring as much, and I can’t really blame them. Again, everyone is struggling.

It’s not that it wasn’t fun, because it was. I learned through the process. But in the end, it wasn’t incredible, it wasn’t terrible, it was just … fine. Which is how I feel about a lot of things these days.

I think the coronavirus live-stream hopping effect came about because there is no answer to all of this. So everyone just hops around, searching for community and connection. And when they don’t find “the answer,” they move on to something else.

The Constant Barrage of Bad News

That’s the worst part of all of this: it keeps going and going, with no end in sight. You thought COVID was getting better? Well, maybe in some places it is, but in other places it’s worse. It’s like a video game boss who keeps coming back after you kill him.

Add on top of that everything else: more police brutality with little accountability, groups that pass on conspiracy theories about Bill Gates kidnapping children, the 42% of people who will vote to reelect the president this fall even if he really does shoot someone on Fifth Avenue, and so on.

Oh, and I didn’t mean to bury the lede: over the past week the west coast (pretty much all of it!) has been on fire. Portland, Oregon had the worst air quality in the world, including every city in India and China.

All we need now is an asteroid to hit the earth … but wait, it looks like that’s happening too, literally the day before the U.S. election.

So yeah—2020 sucks! That’s all there is to it. I still want to come out of it better than I was in February, but the odds aren’t great at the moment.

Of course, let me be clear: if you’re having a banner year, good for you. I’m not at all sad about someone else being happy.

If you’re struggling this year, however, know that you are part of a very large club. None of us want to be in this club, but here we are.

Every day brings more discouraging news of one kind or another. We aren’t sure what’s coming next. Yet of course we endure, because life is still good even when it doesn’t seem that way.

I’m going to take a pause on a few things for a while: keeping up with my email, most of my interviews, most social media, and YouTube. I won’t stop doing everything, of course, and hopefully I won’t stop for long. I still have my daily podcast and am working on a new book. Otherwise, though, I need to regroup a little.

Likewise, I encourage you to do whatever you need to care for yourself during this time. We need you to stay around! You don’t need to pretend to feel positive if you don’t. Just hang in there, because this too shall pass—eventually.

What Would You Say If You Could Go Back in Time?