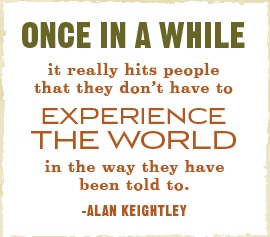 I’m home! What a great trip – I had a nice swing throu South America, successfully avoided deportation in Saudi Arabia, and met with friends and readers at five stops along the way.

On the last leg of the trip I picked up what I call “swine flu lite” – I’m not dying, but I haven’t been able to do much of anything over the past couple of days. Since I don’t get sick very often, I figure I might as well go all the way when it happens. Who needs moderation?

On my last stop before flying back to the U.S., superstar designer Reese and I spent a couple of days working on projects in her home base (now known as the World Domination Branch Office in Asia). One of the things that’s bothered me for a while is that while I love the overall design of the site, there were a few interior areas that I’ve neglected.

In any pursuit of excellence, the difference between the 90th and the 99th percentiles is all about details.

I’m tempted to forget about the details (most of the time I do), but since this is a legacy project, I wanted to go back and begin making the small improvements that will bring things up a level.

Some of the improvements are behind-the-scenes tweaks, but here are a couple of examples of what we worked on:

The long-awaited email newsletter redesign is also finally complete, thanks to Reese and her subcontractor David. If you’re on the list, you can expect to see the new format as early as tomorrow, and by Thursday for sure.

By popular demand, later in the year I’ll be making an all-new travel product specifically about Frequent Flyer Miles. I currently have about 600,000 miles in various accounts, but I go through them quickly. Over the course of a year I probably earn and spend at least 300,000, and sometimes more.

For now, I’ve got other priorities – so I’ll just continue to send free travel updates and new ideas to everyone who already owns Travel Ninja. The next update contains an advanced travel hack I put into use for the first time last week while stranded in Hong Kong airport for 14 hours.

Yes, that’s right – a full 14 hours after our scheduled departure, my Air Asia plane finally left HKG. Personal records are good for marathons, but not really for flight delays. Hopefully this record will stand for a long time, because I don’t have any desire to break it.

About halfway through the long wait, I realized I could do something that would gain me access to the best airline lounge in Hong Kong airport, even though I was traveling on a budget airline. The more I thought it through, the more I realized the hack could be replicated in any major airport in the world, whenever someone was delayed for three or more hours.

It’s not about buying a day pass (the best lounges don’t sell access), and it’s definitely not an airline-friendly trick I could write about here. This is an advanced travel hack, contains a bit of risk, and isn’t something that everyone will be comfortable with – but I’ll be writing about it in detail to Travel Ninja owners this week. If you don’t have the product yet and are curious, read more or get your copy here:

After I recover from jet lag and swine flu lite (it’s kind of like Diet Coke), I’m planning to do a local meetup here in Portland, Oregon. If you live in PDX or nearby, stay tuned for details or follow me on Twitter as we figure out when and where to do it.

I’ll be home for more than a month this time, so it would be great to catch up with everyone local who I haven’t seen recently (or ever).

Tomorrow we’ll look at Personal Responsibility and Showing Up. Until then, I hope all is well with you, wherever you are in the world.

Merry Christmas from the Art of Non-Conformity