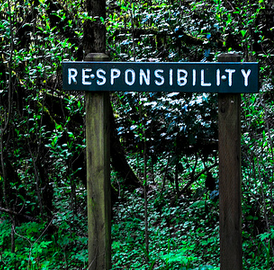 To be truly awesome, you have to go above and beyond the efforts of those around you, look for alternative solutions, and refuse to back down from the truth. There’s a whole article about it for those who are curious.

But it all starts with showing up. Or, as a friend of mine puts it:

Insight such as this is difficult for some people to accept. Just imagine the excuses you’d hear:

But that’s not fair! But I tried to do it and something else came up! But some things are out of our control!

You can probably think of other excuses – in fact, you’ve probably heard them many times over. Thankfully, for those of us who do take responsibility, there’s good news on two levels. The first good news is that we automatically stand out. In a world of buck-passers, those who decide to take responsibility are unusual. Yay. You get the yellow jersey by default. (You still have to win the race, but no one is surprised when you do.)

But on a deeper level, the bright side of taking responsibility is that you can own your own success. Sure, other people helped you get there, but you were the one who actually crossed the finish line. You showed up. You did it. If you have to own the struggle and failure, integral parts of any goal worth pursuing, surely you can also own some of the success.

Remember this: many people can help you achieve success, but no one else is RESPONSIBLE for your success.

It’s okay to be proud of your accomplishments. Really.

When I think about people who rocked my world and redefined the course of my life at key points along the way, they fit into two general categories: those who took a chance on me when others wouldn’t, and those who turned me down or gently steered me elsewhere when something I wanted wasn’t right for me.

First up, I really appreciate the people who took a chance on me when others wouldn’t. Most of them are not on Twitter, they don’t have blogs, and they wouldn’t want a public shout-out. I know they are out there somewhere, probably taking other chances and helping other people. Good for them.

Because of what they did for me, I try to do the same for others wherever possible. Freely receive, freely give, right?

The second group – the people who declined my request for assistance, or who steered me elsewhere when something wasn’t right for me – goes a bit deeper. Without exception I was always initially disappointed in these encounters, but I was usually better off for them in the end.

In 2005 I applied to a graduate program in the U.K. Until the day I received the form letter thanking me for my application and offering regrets “due to many qualified applicants,” I was certain I’d get in. When I read the letter, I was crushed. I had scheduled my life around this opportunity, and then it was gone.

Surely this was a mistake! How had they misread my brilliant application?

I didn’t get in, I didn’t get waitlisted, and I never heard from them again. Thankfully, it wasn’t the final story. The final story involved spending a fourth year in Africa, strengthening many relationships there, working with the president of Liberia, moving to Seattle, setting up a new life in the Pacific Northwest, going to a graduate program that was better than the one I had hoped to go to earlier, traveling to all kinds of fun places, and eventually leading me to begin the career I have now.

I have no doubt that things would have been very different otherwise. It’s hard to say what exactly would have developed, but it’s fairly safe to say I wouldn’t be writing you now from Korean Air flight 017 (ICN-LAX) after two weeks of roaming the world. I like Korean Air just fine. I’m glad I didn’t miss out on this adventure.

In retrospect I can also see that I was drifting a bit during the time of that application. I was doing good work, but my overall purpose wasn’t clear. I think I viewed a university year in the U.K. as a way to defer life for a while. Being turned down required me to let go of the idea that an external force (in this case, a university) would carry me along instead of me figuring out what I really wanted.

Sometimes people let you down because they suck. Sometimes you’re just not ready. Other times, they let you down to give you the chance to be great without their help. Being pushed out of the nest is a good thing. It forces you to readjust your expectations: “Oh, this person isn’t actually going to be responsible for me. I guess I’ll have to be responsible myself. I guess I’ll have to find a way to meet the goals in order to feel better.”

When we find ourselves stuck in a situation and unable to move forward, something has to change. It is unnecessary and potentially fatal to rely on others to create change for us. Who’s responsible for creating change? You are.

What’s your job? Show up and bring something unique. I’d wish you good luck, but luck isn’t up to you. Luck is like a winning lottery ticket – if it comes your way, might as well cash it in. In the meantime, better to focus on what you can really influence.

Instead of luck, take heart. Take courage. It all starts with showing up.

Thanks to Carolynn for the quote about meeting goals.

Three Types of Happiness: How Do You Choose?

To Express Gratitude, Put the Do-Not-Disturb Sign Back Where It Belongs
© 2023 The Art of Non-Conformity | Site by Bytegrow Technologies