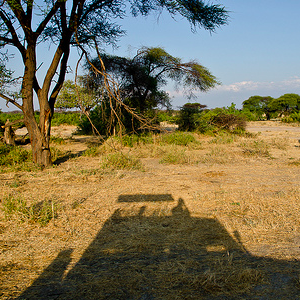 Once upon a time I lived in the small country of Togo in West Africa. I was based on a hospital ship docked in Lomé, the capital, and the team I worked with had a project three hours’ north in a village.

One of our team members needed to be there during the week, but not over the weekend. Because we had a lot of projects competing for transportation, we couldn’t allocate a vehicle specifically to her. She could have stayed in the village over the weekend, but life in the village gets old after a few days. What to do?

I solved the problem by offering to drive her both ways for as long as she needed. “That’s crazy!” someone said. “You can’t drive six hours round-trip twice a week for three months.”

But that’s what I did. It wasn’t that hard. All I had to do was… drive.

Week in and week out, I drove a Land Rover three hours north, dropped off our team member, then drove back on my own. On Thursdays I’d make the return trip, picking her up and delivering both of us back to the ship.

To me it seemed simple enough: something needs doing, I don’t see another way to do it, so I’ll just do it myself.

Just F—ing Do It, Already

I’ve had this attitude all my life, and it’s helped me accomplish a lot of things. Whenever I wanted something done, I’d find a way to make it happen.

I dropped out of high school and went straight to college. In college I learned I could take 40 credits a semester by simultaneously registering at four different institutions, instead of the 18 credits students were limited to at any single university. I liked the challenge of it. The biggest problem wasn’t passing the tests, it was trying to keep track of where I needed to be at any given time.

When I started writing, I didn’t want to spend years writing for no one without getting paid, so I figured out how to make a decent living in 279 days.

Part of the reason I went to all 50 states (and all 10 Canadian provinces!) on my first book tour was because my publisher didn’t believe I would really do it. Of course I will! It can’t be that difficult, right?

And it wasn’t difficult—just like driving up and down the country of Togo, week in and week out, on the original book tour all I had to do was go to state #1, then state #2, and so on. I had some help along the way but it was largely an independent effort.

These are the kinds of things I’m good at. I don’t question my ability to execute or implement on my own. Over the past year, though, I’ve realized how terribly limiting this ability can be.

I’m making a big mistake! And I need to correct it.

As I look back over the past few years, I can see a few big successes and a few clear failures. Short-term failure is nothing to be ashamed of, but it’s important to avoid making the same mistakes over and over.

I can also see a pattern: I build a business to a certain level and then leave it to do something else. I work as hard as I can for a short period of time, and then I experience a certain amount of initial success, and then I lose my motivation for it. It’s happened over and over.

On the surface, there’s nothing terribly wrong with this pattern. It worked for a long period of time as I was hopping from project to project. It’s just … no longer … acceptable.

It’s not only a personal failure; it also affects other people.

Perhaps I could accept this weakness if it was merely a personal limitation. Everyone has strengths and weaknesses, and I’ve always been better at the solo game. If you wanted someone to drive you around Togo for six hours a day, I was your guy.

But the bigger problem is that this weakness now affects far more people than just myself. I’m letting down the community! There is so much around here that doesn’t live up to the standard that readers deserve!

Last year when I was on tour for The $100 Startup I received dozens of invitations to visit other groups and cities. The co-hosts were able and willing to put things together… but I was too busy to sort it out.

Meanwhile, other people wanted to host their own meetups—a brilliant idea, since I wouldn’t need to be there for them and they could happen independently. But again, I was too busy to create a plan, so the idea floundered.

I’ve seen this pattern in most businesses or projects I start: lots of initial enthusiasm followed by a lack of good follow-up on my part. There are a couple of exceptions that keep things running, thankfully, but the clear pattern is that I start things and then move on without taking the time to create real structure that will allow the project to grow further.

It’s time to make some changes to that pattern.

The Plan (Now hiring! Or at least, soon…)

Since I wrapped up the final country in April, lots of people are asking “What’s next?”

I’ll have a new quest that starts in 2014, focused on travel and community. I’m very excited to begin… but not just yet. What I do over the next six months will allow the new quest to be fruitful and sustainable. Priority #1 is sorting this whole thing out later in the year.

The next few months are locked down tight, and I’m doing very little travel. We have 3,000 people coming to town for the biggest WDS ever in less than a month. Thankfully, we have a great crew for that, as it’s one of the few things I’ve created that I feel is somewhat sustainable.

I’m also writing a book and working with our new members of Adventure Capital (Thanks to everyone who signed up during last week’s soft launch. Everyone else, yes, you can still join.)

These three projects are big, but not overwhelming. What’s overwhelming is everything else! All the little and not-so-little things. That’s why I need help.

For the first time in forever, World Domination HQ will be hiring. My feline assistant can no longer keep up, and her sleeping hours are highly problematic.

Normally it’s good to start small, but I’d prefer to get it right. Later this year we’ll be bringing on several people to oversee much of our little corner of the world. I’ll continue to write, travel, host events, and create projects… but I won’t be the one emailing people from Senegal when they can’t find their PDF or need to change their password for something.

Most of these roles will be part-time, but they will be serious positions with profit share, an opportunity to set an independent schedule, and room to get as involved as people want to be.

I’ve long said it’s ridiculous that bloggers have interns, but I’ve been doing this for five years now, so perhaps it’s time to make some changes.

This is my goal for the second half of the year: actually create some better systems and practices in the overall operation, and get in a better place for 2014. Watch this space. It’s going to happen.

Have you ever struggled with trying to do everything yourself? If so, what did you do about it?

How to Be a Motivational Speaker

Joy, Money, and Flow: The Three Qualities of Purposeful Work

Being Able to Ask “What’s Next?” Is a Sign You Are Happy in Your Work
© 2023 The Art of Non-Conformity | Site by Bytegrow Technologies