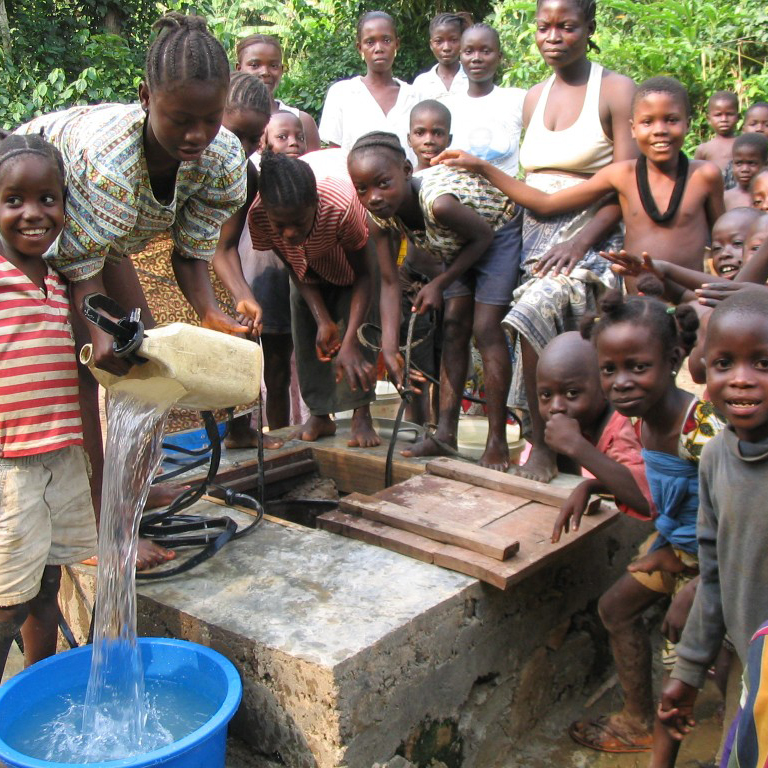 In 2004 I went to Liberia for the first of five visits. It was a pretty crazy place at the time, having just ended an 14-year series of civil wars a few months before I arrived with a small assessment team. The streets were patrolled by U.N. tanks, the only electricity was provided by private generators, and the non-functioning lampposts were covered in bullet holes.

While surveying villages outside of the capital Monrovia, we found this site where villagers obtained their drinking water.

As a traveler, I drink the tap water almost everywhere I go — but you can be sure I brought my own $3 bottle of water with me that day. No one builds up an immunity to a water source like that.

The previous year, while working in Sierra Leone, we had taken up a collection for another charity further upcountry in Liberia. After seeing the first water source, we made our way to the second site in a long, bumpy ride in a Land Rover. A crowd gathered to greet us, and this was the image we found at that scene:

At this site we heard a number of interesting things from the villagers, the most interesting of which was that no child had died since the well had been installed. I thought that was a pretty good return-on-investment: pay for a well, work with a local organization to ensure a strong educational campaign accompanies the arrival of the well, and children stop dying.

Stories like these are the best way I know to illustrate two things:

1) The global water crisis is staggering. I won’t bore you with statistics, except to note that almost one billion people in the developing world are more likely to drink from a water source like the first image than the second.

I don’t know about you, but these days I’m more concerned with the quality of my cappuccino than my drinking water. Despite the fact that the world is unfair in many ways, I find it unacceptable that so many people have to worry about where their daily water comes from.

2) Enabling people with the ability to make their own choices is the best form of development. If you can’t make the simple choice to not get sick all the time or keep your children alive, your options are very limited. There isn’t much “lifestyle design” in places like this.

Having been through graduate school in the social sciences, I’m well aware of the moral relativist argument that we should mind our own business and leave these things alone. But fortunately, my two years at the university were preceded by four years in places like Liberia and Sierra Leone. I’ve seen too many water sources like that of the first image, and no one wants their children to die before the age of five due to a completely preventable illness.

Next week, we’ll kick off the new AONC Charity Project. It’s actually not completely new; I’ve been donating a big chunk of revenue towards it for a while, and I’m working with my publisher to integrate the project with the book that comes out this fall.

I haven’t said much about it before and don’t want to make a public issue about my own giving, but I also realize we can do a lot more as a group than any of us could on our own. Therefore, stay tuned for a different kind of launch, which will be accompanied by an ambitious goal (of course).

The thing about before and after — it’s hard to go back to before when you’ve experienced the after. This is true in life, clean drinking water, and transformation of all kinds.