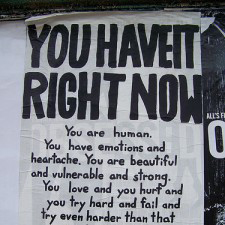 At any given time, most of us have no shortage of challenges we’re trying to work through or overcome.

Entrepreneurs must create something out of nothing — a process that is both fun and tiring. Ambitious people who work in organizations have to work with colleagues in pursuit of collective goals. Sometimes the colleagues aren’t as ambitious or have other ideas.

Those of us who go it alone have plenty of issues, too. If someone ever implies it’s easy out there, put your skeptic hat on.

Thankfully, there is one challenge that is entirely optional. This challenge is the question of how to be yourself, otherwise known as authenticity.

Good news, everyone. When it comes to authenticity, you already have it!

Authenticity is the core part of who you really are. It’s whatever you have that is deep down underneath everything you do because you think you should. No one can bestow it upon you; it’s the thing about you that is REALLY YOU.

The reason why this is difficult for some of us is because we have trouble locating the core. It is very likely that this core has been disrupted and disturbed by authority figures who thought they knew better.

What has been taken from you? How can you get it back? These are the important questions of authenticity.

There is nothing mysterious about authenticity. If you have to ask, “How can I be authentic?” you’re on a slippery slope. Authenticity is not a game to be played or a strategy to be devised.

At least twice a week, someone asks “how I make the guides and manifestos.” They often use the word “software” or “program,” and they’re not asking whether my superstar designer prefers Adobe or Quark. Instead, they’re looking for the magic service where you put in a text document and out comes a beautiful design, completely customized for you and your readers, already debugged and tweaked, with all the right small touches that make the difference between good and great.

As you might guess, there is no secret software or magic service. The secret is having a great designer who has spent years honing her skills. When you visit her in Asia you see the thick notebook pages she has filled with concepts and early drafts. Meanwhile, Reese, the designer in question, gets queries every day from people who correctly deduce that there is a design wizard behind the operation. When she asks what kind of style they want, about 50% of them tell her: “I want it to look like Chris’s site!”

Both of us are flattered… but in the long-run, all of these people will be better served through authenticity than imitation. People want you. They really do. I like how Gary Vaynerchuk said it recently: “Not being yourself is exhausting.”

I agree with Gary — from time to time I try being someone else, and the act of being an impostor really wears me out. I’m much better at being myself, including the flaws. All things considered, it’s worked out okay so far.

Over the past few weeks I’ve been collecting stories of unconventional success through social media. I’ve been having so much fun, I hardly realized I was working. I’ve heard from science fiction writers, artists of all kinds, animal rescue activists, and entrepreneurs.

Among many others, I heard from a guy who works at a Mexican restaurant in the northeast U.S. He was brought in to run the one-man marketing department. In his own words, “The boss was clueless about marketing, but so was I.” The first month, he bought billboards and TV ads. Results: a few people came in, a lot of money was spent. The second month, he decided to sign up for Twitter. Results: almost no money was spent, a lot of people came in.

The funny part of the story was when he first started using actively using Twitter to broadcast burrito specials, a couple of self-identified social media experts contacted him to nitpick. “You’re doing it wrong,” they said – and of course he was worried. Experts know better, right?

Since so many customers were coming in and the boss was happy, though, he decided to ignore the experts. A few weeks later, he went to a local Tweetup and put his user ID on a name tag. Someone saw it and told the whole room: “Hey everyone – this is the Mexican restaurant guy!”

He ended up being the most popular guy there, and business is still booming. Hint to experts: if your strategy works and people like you for it, you’re probably not doing it wrong.

Tomorrow morning I’ll release the Unconventional Guide to the Social Web, my first product in a long time. A co-conspirator and I have been working on it non-stop while I’ve been home the last month. It’s going to be fun.

You don’t need a product to be authentic, of course, but if you want to spread your net wider or reach more people, this will help. If you feel overwhelmed or afraid of putting yourself out there to the world, it will also help.

Check back tomorrow for more about that, beginning at 9am EST / 6am PST. More importantly, check with yourself to see if you like who you are. If so, that’s authenticity. You has it.

There’s no need to be like anyone else, or anything less than you already are.

Tags: authenticity, be yourself, branding, Gratitude, non-conformity, Personal Development, reese, you has it