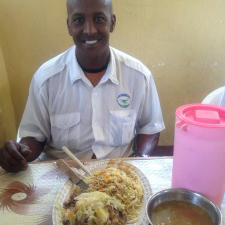 On my last trip, I made it to a country I’d been wondering about ever since beginning my quest more than five years ago: Somalia.

Technically, I went to Somaliland, also known as the safe part of Somalia. Somalia itself is a mess, arguably the world’s most dangerous country, and with hardly a functioning government of any kind. (One of its recent prime ministers now works at the New York State Department of Transportation.)

People often ask me about visiting dangerous places, and I have a stock answer: there aren’t that many. Most countries around the world are about as safe as where you live now, so for the most part you don’t need to worry.

But it’s true there are a couple of exceptions, and Somalia is at the top of the list. That’s why I went to Somaliland instead, an autonomous region that should probably be its own country, but for the political situation of the African Union. Somaliland is practically it’s own country, with its own immigration procedures, currency, and easy way of life (no need to travel with a group of machine-gun carrying youth, as is the case in Somalia proper).

Getting There, Part I

Regular readers may recall that I first attempted Somaliland a couple months back, but was blocked by an unreliable travel agency and a questionable airline. This time, I switched agencies and airlines, but still almost got stuck. Up to the night I arrived in Nairobi from the Central African Republic, I still had no ticket for the early morning flight the next day.

Fortunately, this time everything worked out well. I rolled up to the African Express check-in counter at 5:30am and was able to buy a ticket in cash. $420 would get me to and from Berbera, Somaliland, via Mogadishu, with an additional stop in Wajir, Kenya on the return.

African Express offers no Frequent Flyer benefits or other travel hacking opportunities, so by making the mistake of boarding late I headed to the back of the plane—way back, to the very last row, as every seat was taken and the overhead bins were jammed with luggage and cargo from returning Somalis.

All Abord for Mogadishu (et al)

Everyone was crammed in and we sat for another hour as the sun warmed up, but I was glad to be getting underway. I’d finally make it to Somalia! We eventually took off, flew for an hour and a half, then landed in Mogadishu. I was excited about landing in a city I’d read so much about (virtually nothing positive, unfortunately) and also happy that I wasn’t staying there.

We took off again, flew for another hour, then landed in my real destination: Berbera, Somaliland. Success!

Getting There, Part II

For better or worse, the journey that had begun with a 4:30am wakeup call to get to the African Express ticket counter wasn’t over. I was traveling to Hargeisa, the capital and major city of Somaliland, but until that morning, I didn’t realize that African Express flew only to Berbera, a much smaller, coastal city. (I later learned that the runway in Hargeisa is too small to accommodate the plane from African Express, though other airlines with smaller planes are able to use it.)

The two cities are connected by highway, but it’s at least a three-hour journey each way. This is kind of like flying to Seattle to go to Portland—possible, but not really ideal. And in the horn of Africa, a three-hour journey is a lot different than jumping on Amtrak or renting a car and heading down I-5.

Oops. I decided to look on the bright side: traveling via Somali minibus would definitely give me a chance to experience more of the local culture. Otherwise, I might have been tired and headed straight for my hotel, but this way, I’d have more of a chance to see Somaliland as most people see it.

Traveling in Somaliland: Notes from a Real Source

I’m always impressed with the people who read AONC, and after my last attempted visit to Somaliland, I heard from a young reader who recently spent a year teaching in a school there. Sophia wrote in to advise me on things to do on my next trip. (She also advised me not to attempt to travel on Jubba Airways again, a recommendation I was happy to take.)

With her permission, I’m sharing some of her notes here in case anyone else ends up in this part of the world.

Ambassador Hotel has the best coffee in the country (Maansoor hotel comes in a close second place). The other places to go for coffee are the Ethiopian cafes that cater to migrant workers and refugees. These are also worth visiting because they have very good food.

Somali food mainly consists of meat (goat, beef, or camel) and rice or potatoes. If you want camel meat (definitely worth trying), ask at your hotel—they’ll know the best places to get it. One cafe that specializes in camel meat is near the livestock market in Hargeisa, which is also quite cool. Livestock is one of Somaliland’s main exports, so markets like this one represent an important part of the economy and culture.

Finally, my favorite restaurant is called Daus Cafe. Run by Somali-Canadians out of a house near the downtown, the place serves up fresh food (best burgers in Hargeisa, hands down!). It’s seen as a secret hangout spot for members of the returned Somali diaspora, and speaking with some of them is a good way to get a sense of contemporary culture and politics in Somaliland. There are also a lot of foreigners who work in the various aid and development projects around the city. You might be able to find it by asking at Ambassador—one of the women who owned Daus was related to the people who own Ambassador (everyone seems to be related—clan is a major part of life in Somaliland).

Other things to do:

Hargeisa School for the Deaf. A school run by local volunteers in the capital. Trains the hearing impaired in different trades and vocational skills (for example, henna). It is the first and only school in the country that remotely caters to students with special needs. Ahmed Shire is the contact person, but you can probably talk to people at Ambassador about arranging a visit.

Abaarso Tech. This is the school where I worked. It has two facilities—one in Hargeisa and one in the village of Abaarso, 20 minutes outside the city. The Abaarso campus is definitely worth checking out. Started as a premier English language boarding school by former Wall Street exec Jonathan Starr, Abaarso Tech is home to some of the most dedicated students in the world. The teachers are all native English speakers. The school is an interesting example of DIY development (think 3 Cups of Tea, a la Somaliland).The son of the owner of Ambassador is a student at Abaarso—they may be able to help you arrange transport there.

Las Geel. These are cave paintings located about an hour outside of Hargeisa. Securing a permit can be a bit difficult, so email me if you need help, or ask someone in Hargeisa. They can probably point you in the right direction. The person responsible for maintaining the site is an archaeologist named Sada Mire. Very interesting lady. Definitely talk to her if you get the chance.

For the rest of my brief visit I was happy to follow as much of Sophia’s itinerary as I could, with the exception of eating camel, a dish that isn’t normally on my menu. However, four years of vegetarianism were briefly threatened when my guides stopped for a meal on the ride in and I was presented with a big bowl of goat. No offense to any goat-lovers or Paleo followers, but even if I did still eat animals, I think goat would be at the bottom of my list, right next to camel.

Happily, there was also a big bowl of rice, so I was able to successfully deter eating most of the goat in lieu of being really excited about rice with my guides. (“I love rice! Thank you SO much.”)

Coming home, I had to reverse the process I had come in on—all the way back to Berbera (three hours by minibus, plus two additional hours waiting for the minibus), three hours waiting at the tiny airport, a long boarding process by airport shuttle bus, a flight to Mogadishu, another flight to Wajir, and finally to Nairobi, where I had—wait for it—five hours of sitting in the terminal before my midnight flight to London.

I often get tired when I travel, but I was even more exhausted than usual that day. After arriving in London I flew to the U.S. and was thrilled to travel on Virgin Atlantic for the first time in several years. I smiled at the difference in experiences: thanks to Frequent Flyer Miles, I traveled in Upper Class and enjoyed a nice meal with wine and dessert. I took a nap in my lie-flat seat and said several prayers of gratitude, while sipping a Bailey’s on the rocks.

Flying through Heathrow’s Terminal 3 before Christmas, I felt a bit of culture shock compared to declining my bowl of goat and riding Somali-style through one of the world’s most interesting countries just the day before. Then in the U.S., I met Jolie and we went to vacation-land for our Annual Review, another big contrast from where I had been.

I don’t think it’s bad to go on vacation or enjoy nice things. The reality is that there will always be people who have more than others (“the poor will always be with us”). Instead I think it’s important to remember the poor, to think about our place in the world and what we can do to to help.

Hearing Sophia’s story about volunteering in Somaliland was inspiring. It was a tough trip for me, a seasoned traveler, and personally I couldn’t imagine living there for a year. I was glad to visit, and I was glad to come home.

This trip brought me to just 16 countries left. I’ll be heading to my next two in just another two weeks, right after launching the Unconventional Guide to Publishing on January 10th.

More on that project next week. But first … a nap.

Portland Area: The AONC Holiday Party is tomorrow night! A few tickets are still available—and we’re even giving away a hammock.