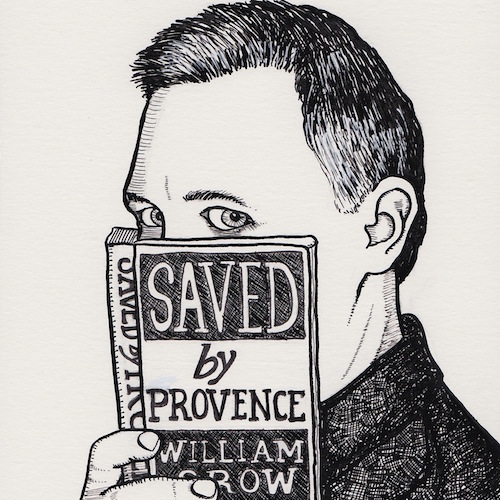 It doesn’t matter how old you are, or how far along you are in your career—there’s still time for change. Bill Crow felt like he was living someone else’s life. Even though it was a very successful lawyer’s life, he still wasn’t happy. So he took a year off and moved his family to France. Disconnecting from his everyday world allowed him to discover what he really wanted to do next.

I went to law school because it led to the professional career expected of me by my engineer father. I had a lawyer’s dream job in my home office in Vancouver, Canada: I had my own law practice, negotiating contracts on the phone for international clients. Best of all, there was no overhead, and I was able to pocket every dollar I billed.

I loved almost everything about my job: the low hours, the freedom, the money, being able to spend time with my kids, the praise of my clients, the work-from-home dress code (PJs).

The only thing I didn’t like about my job was the actual doing of it. Practicing law was like sticking needles in my eyes.

I had achieved what society demanded of me, but was consumed by doubts, regret, and guilt. I felt like an imposter, and fantasized daily about abandoning my career. I had no business being unhappy, and I felt like a jerk for not wanting what everyone else wanted. I wasn’t the only guy in his fifties living a quiet working life of screaming hopelessness, but I sure felt like it.

Adjusting to life in France

In the beginning, I was simply focused on escaping my lawyer life.

After several years of soul searching, I put my fears aside and agreed to spend one year in the south of France with my family. I was elated at the prospect of a long vacation, but at the same time I was still nervous and worried about what other people would think of me.

Unexpectedly, France became the filter through which I evaluated my profession, my relationship with my family, and my life. Chugging rosé on the patio of my rented country home, haunting cafés or biking through Cézanne landscapes, I questioned society’s definition of success and the path to happiness.

Even though I didn’t know it at the time, my quest was to let go of my ego and income and be true to myself… by finding what I was really meant to do.

Enjoying the journey, learning from the failures

Once I moved to France, I started to contemplate goals bigger than escape. I dreamt of leading a creative life. I’ve loved cartooning my whole life, so I thought if I could design a comic strip for newspaper syndication, I would be able to feed my creative desires and practice law only part time. I thought that would make me happier.

But this failure taught me something. I realized that during the process of creating the comic strip, I was the happiest I’d been, maybe ever. So even though the comic strip didn’t work, I could do something else creative.

So I started writing articles which I planned to sell to widely circulated magazines. That also ended in rejection from every magazine that bothered to respond. Again, the writing process was a happy experience; it just didn’t work out the way I planned.

It was after this failure that I realized I was only acting in half measures, not going for it. I finally admitted to myself that what I always wanted, deep down, was to write books. I realized the only way to do it was to fully commit, and quit law for good; this was a difficult and painful decision.

I was giving up a 25-year career, a steady income, and my lawyer persona. And I was doing this for the writing profession, one which I knew nothing about, except that most people fail at it.

The house where it all happened

What surprised me was the depth of my elation the day my wife and I sat at an outdoor café in Aix-en-Provence and made the joint decision that from that point on, I would never be a lawyer again.

Of course I was happy! Who wouldn’t be happy to shed a job they hated for 25 years?

But it was more than that. It was like a monumental gorilla had jumped off my back, dragged his knuckles across the cobblestones and disappeared down an alley. I knew he was watching, in case I changed my mind, but I was determined I wouldn’t let him.

I knew what I was doing was risky and impractical, but honestly, I didn’t care.

Grabbing the next trapeze

Years ago I was at a Vancouver bistro talking to a friend about changing jobs and maybe even professions. My friend, Sharka, questioned the need to do something so drastic since it seemed to her that I had always liked my job.

I listed the things I didn’t like about my job. Dismissively, I talked about wanting to be a writer or an artist but how that probably wouldn’t work.

What Sharka said stuck with me: “It sounds like you want a big change, but already decided you can’t have it. Making a big change is about making space for yourself. Life is like being on a trapeze. You have to let go of the first trapeze to get the next one. For a split second, you’re not holding onto anything. You’re suspended in midair and you could fall. You trust the next trapeze will be there when you need it. Once you grab the second trapeze, it’s clear sailing. So if you don’t want to do law anymore, don’t. Just let go.”

I should’ve listened to Sharka years ago and saved myself much torture. But I needed that time away from my lawyer life, complete separation from that world, to have the space to think clearly. That’s what France gave me.

Disconnected from the familiar business world, hovering in mid-air and risking a fall, I was excited to grasp the next trapeze.

I just had to let go.

How to See the World as a Full-Time House Sitter

Will Travel For Food: One Man’s Journey to Rediscover a Lost Love
© 2023 The Art of Non-Conformity | Site by Bytegrow Technologies