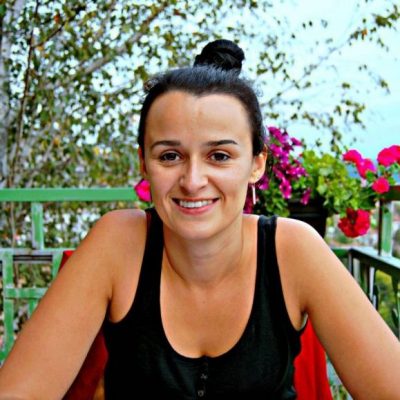 How do you preserve that special feeling you get from travel? For Sofie Couwenbergh, keeping the magic alive meant not turning traveling into a full-time pursuit. Learn how she forges her own path.

I was born and raised in Belgium. I’ve always known that I wanted to do “something with writing,” so I studied literature and got a job as a copywriter and marketing coordinator. I’d even picked up an amazing boyfriend along the way, and together we’d found an affordable apartment we loved. But wait, I’m not that boring!

I was miserable at my first job and later I was miserable at my second. At the same time, the more I saw of the world, the more I wanted to see. I used up all of my vacation days (and we have many in Belgium!) and even took unpaid leave — but it wasn’t enough. Not only was traveling not enough, there was something missing in general. I thought I just needed a creative outlet, so I started a blog. Through blogging, a whole new world of freelancers and digital nomads opened up to me.

I finally realized I didn’t know exactly what I was meant to do, but I did know that I needed to do it on my own.

So I set a plan to quit my job a year later. That year became a short six months and I haven’t looked back since. I’m not making six figures. I didn’t start a quickly booming business, but I’m confident that I’m creating my own path.

Part of that path is having a home base.

First, I have a fantastic boyfriend who has a “normal” job in Belgium, who loves being in a familiar environment near his friends. I know that doesn’t stop everyone, but our relationship is too important to me, that I don’t want to pack up and leave. Even if I did decide I want to go traveling for six months, it wouldn’t be that easy for me to pay my share of the rent and my travel expenses as well.

Secondly, by having a home base I enjoy my travels more. Although I often work while I’m traveling (I do a lot of campaigns for travel brands and destinations), there’s still that sense of urgency that the trip only lasts so many days. I’m more inclined to go out and enjoy every bit of it. I’m afraid that if I traveled constantly, I would either not work or would work too much and miss the traveling.

Travel changed the way I see my future.

My first trip to Los Angeles had already been amazing—I’d been more open to strangers than ever and it paid off big with some memorable moments. But one particular interaction changed the way I look at life, work and myself.

On one leg of my flight, I was sitting next to this guy who moved from Italy to the States with his family when he was little. His wife was American, they had three kids together and their middle teenage girl was into acting. She did a couple of school plays and took classes, but one day she came home and told her parents she wanted to be on television.

Her father, the Italian guy I was talking to, looked at her skeptically while thinking that it would never happen. So many people came to LA to be a star, so why would she succeed?

Her mother, the American, started Googling and making calls. A few weeks later their daughter was in an episode of a television series.

To him, this highlighted a key cultural difference between Europeans and Americans. The difference of belief. Not in a God or some other mythical force. But a belief in ourselves.

It’s okay to stand out, to do your own thing and be different.

That story planted the seed of my entrepreneurship. That story made me look at my blog as something that could turn into a business, not just a hobby. That story told me it was okay to believe in myself, expect more, try harder and never settle for “enough.”

When I started traveling I was a very shy, insecure person but being around travel companions who were more sociable than I, lead me to open as well. And as cliché as it sounds, I realized that the more open you are with others, the more open they’ll be with you.

I try to uphold that openness at home, but it’s much easier when you’re traveling because if things get awkward, you’ll never have to see the other person again. While I still don’t always succeed in smiling at people on the street or striking up conversations in coffee shops, I’m definitely not that same, shy, insecure person I was when I first started traveling.

“3 Encounters That Changed My Life”: How a Corporate Employee Gained a New Perspective through Travel
© 2023 The Art of Non-Conformity | Site by Bytegrow Technologies