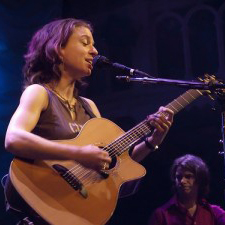 Last week I went to see Ani DiFranco at the Crystal Ballroom in Portland. It was a great concert, filled with high-caliber musicianship and passion.

Ani has built a life and career over the past twenty years as a musician and activist. These days it’s not unusual or especially difficult for a musician to go it alone without a big record label. In some ways, it may even prove beneficial to skip the labels in favor of being a direct supplier. But Ani was doing that long before the internet changed the industry, turning down deals from companies so she could retain complete freedom.

Watching from the back of the room last week, I found her music to be uplifting and inspiring. Ani has the technique and the skills to go along with the passion—but if you can only have one, I think it’s better to choose the passion. Other things will come along later, but passion is hard to fake.

At the end of the set, she played two songs. The first was an adaptation of a labor movement chorus from the 1930s, Whose Side Are You On? This song, as you might expect, was fairly confrontational, and it reminded me that not everyone is comfortable with the idea of picking sides.

In some ways it would be nice to live as a moral Switzerland, but I don’t think that’s much of a life. What do you do when you encounter injustice—where is your courage? You can try to be apolitical and agnostic, going with the flow and letting other people make decisions for you, or you can be bold and take a stand. Maybe you can even be willing to be wrong.

For the encore, she played 32 Flavors, one of her better-known songs. I like this part:

Later I heard from someone who said she didn’t understand why so many people were interested in this movement. I’ve been doing these things for years on my own! she said.

I said that’s great … if you have never had a family who doesn’t understand, or experienced other people making plans for you, or been pressured to do something that would put your dreams on hold, good for you. You are the fortunate exception. (And if that’s really the case, I also think you should raise the stakes a little, because where much is given, much is required.)

For most of us, non-conformity isn’t something we make a single choice for or against. It’s a process of adjusting our life, learning to be comfortable with change, and understanding that we probably have more opportunities than we initially think.

I recently heard an interesting definition of success: continuously improving your circumstances. I like it, except I would add something about improving the circumstances of those around you. If you adopt that as your goal, it helps to look up to people who have been doing this a while.