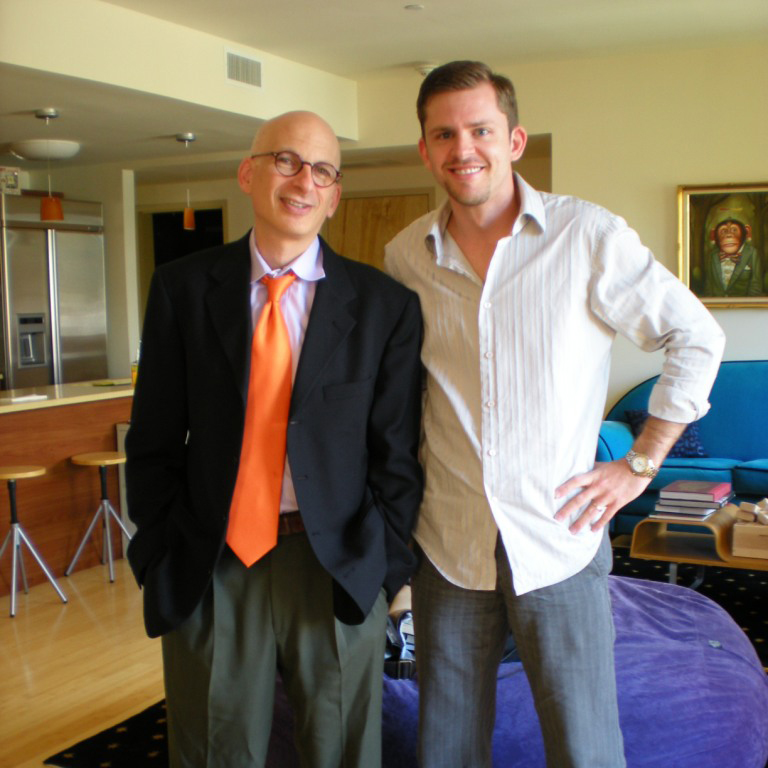 I returned to Portland late last night after a great visit to the great New York City.

I’ve needed to go to New York for a few months now – I wanted to meet my book editor and a few other people, but I kept putting it off. Since I travel so much internationally, I try to keep my domestic trips to a minimum.

However, when I received an invitation a couple of weeks ago to visit with Seth Godin and his remarkable Alternative MBA students, I knew it was time to break out the calendar and book a ticket.

If you don’t know the history of Seth’s audacious idea, here’s the original post. The short version is that most MBA programs are all about life avoidance and racking up debt before the students race back to the cubicles that they came from.

Graduate programs in the social sciences, like the one I did, are slightly different – there aren’t any cubicles to go back to, because everyone competes for the same limited jobs after they graduate.

I don’t have any regrets about my education, but that’s also because I paid for it myself and didn’t have any expectations about career assistance. If either of those variables were different, then I might feel differently.

To counter the $50,000 tuition and two years of life avoidance that most business schools require, Seth has condensed the two years into six months and a bill of $0 for a few, carefully-selected applicants. Every day the group meets from 9am-2pm, and the agenda focuses mostly on the projects each student is working on. Once in a while they let a smart guest lecturer come in and talk, and once in a while they let someone else like me come in and talk.

What I Appreciate About Seth Godin

I’ve been reading Seth’s books since at least 2004, when I had a copy of Free Prize Inside! shipped to West Africa. There are a lot of things I could say about Seth, but what I appreciate most is his courage to continue challenging authority and providing a voice for excellence. A lot of my writing, especially about overcoming the norms of mediocrity and striving to be remarkable, is heavily influenced by Seth.

At his current stature in the world of business and blogging, Seth could still write good books and posts without challenging the status quo, but that would be the easy way out. Instead, he keeps speaking the truth no matter what the opposition thinks – see entries on textbooks, online advertising, telemarketers, and teakettles – just to name a few.

About 25% of the AONC readership has come from Seth’s two mentions of my work on his site, so I know that many of you feel the same way I do about him.

I headed up to Hastings (about 40 minutes from Manhattan) from Grand Central Station and caught up with the group. In addition to the master himself, the group included the following great people:

My philosophy in these kinds of meetings is to prepare as much as possible, but also make sure that everyone is comfortable with the agenda before proceeding to talk. I’m not the best speaker in the world, so when I get an opportunity like this, I take the process seriously, think a lot in advance about what the most important message is, and try to keep the focus on helpfulness as much as possible.

Here are a few things I talked about with the group:

After my talk, Seth led the group in a 40-minute discussion about my upcoming book – you know, the one I’m supposed to be writing. He even designed a mock cover and printed it out while we were talking! What a cool guy.

Afterwards, Seth had to go to a TV interview, so the students and I went to lunch at a Mexican restaurant down the street, where we talked some more about their plans to take over the world and revolutionize various industries.

It was as inspiring as you’d expect, and I left the group feeling even more grateful than usual. Thanks, Seth and SAMBA students, for putting up with me. You’re so kind. I remain dedicated to helping out with your great projects any way I can.

It was such a busy three days that I think I’ll write up the rest of the NYC trip and include it in Sunday’s site update. Among other things, Jonathan Fields and I had a group meetup on Tuesday night that rocked my world and gave me a new perspective about what this is all about. It was overwhelming in a good way. Thanks in advance to the huge group who came out – and I’ll say more about it on Sunday.

I’m back in Portland, and looking forward to the Escape from Cubicle Nation workshop with Pam Slim tomorrow. If you’re local in PDX, sign up here and use discount code “Chris” to get $30 off. (I don’t get paid for it; I just love Pam and know she can help a lot of corporate prisoners.)

Then, at 4:30 a.m. on Sunday, I return to my second home to leave for the biggest trip of the year. South America! Saudi Arabia! (If they give me a visa, that is.) Malaysia! And more.

Of course I’ll be writing from the road, like always. The journey is far from over, and after this week I’m more inspired than ever to keep going.

Don’t Join the Popularity Contest: Make It Happen Yourself
© 2022 The Art of Non-Conformity | Site by Bytegrow Technologies