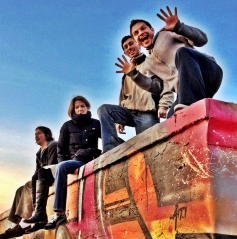 Online interviews are a dime a dozen… except when they’re done amazingly well.

Jonathan Fields decided to rise to the challenge of producing thoughtful, in-depth features on interesting people. He’s kept at it for more than three years and is still going strong.

I asked him why he started Good Life Project, otherwise known as GLP. Here’s what he said:

“Though I still consider myself primarily a writer and entrepreneur, witnessing the reaction to the trailer we filmed for Uncertainty hooked me into video, too—and then The Good Life project.

More than anything, the project has given me access to incredible people. Sitting down with people like iconic designer, Milton Glaser, soulful thought-leader, Brene Brown, world-class entrepreneur and story-architect, Nancy Duarte, and ruckus-maker Seth Godin is my job—and it’s amazing. I’d wanted to build more robust educational experiences, events, and communities than ever before. GLP lets me do all of that.”

I also asked him—and a few other people—what their favorite GLP videos were. Here are the ones that consistently came back in response:

Wind through experiences in Brene’s own life that have led to powerful changes in outlook and focus. She and Jonathan also discuss the intersection between vulnerability, uncertainty, risk, shame and success in business and entrepreneurship.

Creators, take heed. Milton believes beauty, and the creation thereof, is a survival mechanism. This conversation looks at the human desire to “make things” and why taking chances leads to something better.

In this conversation, Jonathan and Seth don’t just explore how to look at the world differently, but inspire you to act on that shift in perspective.

Lissa goes where few medical doctors go before: deep into the idea that your mind is your best medicine (and she backs it up with scientific research). She and Jonathan talk about what it means to go against expected thinking in a field that doesn’t always welcome an unconventional perspective.

Blending older Eastern traditions with a more modern West, Sakyong Mipham cultivated a stunning ability to bridge both worlds in an insightful yet immensely-relatable way.

When described as a vibrant college student, Christina wanted to study grief. But it was only years later when she actually experienced profound grief that she began to truly understand how to help people.

Charles combines neurology and psychology to look at why old habits never really die—and what you can do about it.

Oh, and here’s my own interview with him. I’d never say it’s one of the best… but if you’d like to learn more about how I got started, Jonathan’s thoughtful questions provide a nice framework.

You can also subscribe to the GLP Podcast on iTunes, where it currently has more than 90 five-star reviews.

Survey Results: What I Learned from 250 of You in 34 Countries

How to Be a Motivational Speaker