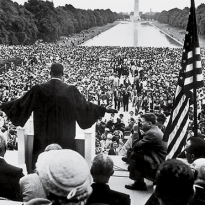 We began Black History Month by looking at Muhammad Ali, an under-appreciated hero of non-conformity in U.S. history.

I thought we’d close by looking at a quotation from Martin Luther King that I’ve always liked:

“The arc of the moral universe is long, but it bends toward justice.”

The life of MLK makes for a fascinating study in leadership. He is a universal hero now, but during his life he had no shortage of enemies. In addition to the stated enemies of discrimination and bigotry, he also had to worry about infighting, backbiting, suspicion from the government, and friends who left him. In some ways I think being thrown in jail is an easier hardship, because at least then you know who to be afraid of and what to expect.

Towards the end of his life, King began to speak out on issues beyond the Civil Rights Movement. He talked about poverty in terms of social class instead of just race, and he criticized America’s war in Vietnam (much to the consternation of President Johnson).

Dr. King was a master at speaking to different audiences simultaneously through the use of phrasing and the choice of examples. I’d encourage you to listen to one of his best speeches, The Drum-Major Instinct. You can hear the whole speech here (39 minutes, opens new window). In this talk he defends personal ambition as a force for good, closing with the statement:

The challenge with King’s work is that it’s difficult to improve on it directly because it was so comprehensive. Instead of looking back, I think it’s better to look at our current world and think about how a “drum major for justice” would respond.

We have to look at our present challenges and shortcomings. How will people judge us a generation from now?

That’s why I think the rich have a moral responsibility to care for the poor, especially in terms of meeting basic needs of clean water and healthcare. That’s why we have to think of our involvement with the other seven billion people on the planet as a primary concern, not something we consider only after our own needs are met.

Thankfully, as King argued, history tends to move in the right direction over time: the arc of the moral universe is long, but it bends toward justice. I offer my gratitude and respect to MLK and the other leaders of the Civil Rights Movement.

What are you doing to further the path towards justice?

Kind of a Big Deal

You Can Do That? Great. Go Ahead.