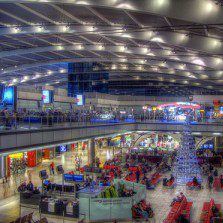 There are those who say that airports are all the same; that travel has become standardized and sterilized.

This view holds that airports exist merely to take passengers from one place to another, and that “real” travel begins only when you leave the terminal.

That’s one way to think of it. Another way is to embrace airports as a travel experience all on their own. An airport begins, continues, or ends a journey.

When I speak to travel groups, I always open with an “airport code challenge.” Here’s an example: how many of these airports can you name?

(Answers at the bottom of the post. Airport memories are below.)

I liked the fact that ULN is known as the “Genghis Khan International Airport”—until I realized that almost everything in Mongolia is named after Genghis Khan. I remember doing pushups late at night in the corner, waiting to fly back to Korea. Genghis was also kind enough to provide free WiFi.

The most overrated U.S. airport is DEN. Apologies to everyone who thinks it deserves its accolades, but I think of Denver like I think of Southwest Airlines: if I didn’t actually travel very often or to many places, I might be impressed. In the case of DEN, it’s great if you’re not vegetarian, if you don’t mind “free” WiFi that works half the time and installs a bar with ads above your browser, and you’re not actually trying to get to the city that shares the airport’s name. But I digress.

Alternatively, there are some surprisingly decent airports in unexpected parts of the world: CMB, for example, which is also a good place to begin a RTW ticket. In EBL they have free WiFi and comfy chairs. But then they took every single thing out of my bag during an extended security check, and confiscated my AA batteries. Lesson: no batteries allowed on flights out of Iraq.

In ICN they give you slippers to wear through the x-ray machine. So courteous and comfy! Asia does hospitality right, even with airport security. And free showers? How kind—but bring your own towel.

In MDW (the non-ORD Chicago airport) they have a place known as “Euro Cafe”. When I went there I wondered if anyone associated with the cafe had ever been to Europe. There are no chairs to sit, only bad filter coffee available, and no one was chain-smoking. (I guess “Amero Cafe” doesn’t have the same ring to it as “Euro Cafe.”)

I found RNO airport to be like Reno the city—a quirky little place with far more slot machines than people. But the restaurant had a good veggie burger, and they gave me free club soda. I have no plans to return, but if I do, I’ll know where to go for lunch.

In the land of paradise, MLE isn’t the best place to be stuck eight hours through the middle of the night. Hard plastic chairs. No WiFi. Misconnect on the flight from Singapore the next day. Lesson: when visiting paradise, be prepared to spend an extra day. If the $800 hotel rooms aren’t enough, think of the sleepless night as an additional tax.

In North Africa, CMN alternates between two temperatures: oven and freezing. The oven section apparently pipes in the Morroccon desert from outdoors; the air conditioning in the freezer section comes from Antarctica. For the best experience, start off in the oven area and then transfer to the freezer. Be sure you stay in the freezer long enough to be thoroughly chilled, because then you’ll move back to the oven and become somewhat acclimatized.

In LHR the high-security password for WiFi in British Airways Executive Clubs is “executiveclub.” Next door at the SAS lounge, the password is “SAS.” There are British Airways and SAS lounges in many airports around the world, which leads to another good lesson: whenever you need free internet, find a lounge, explore the possibilities of camping outside, and type in the name of the lounge in your best WikiLeaks move.

Also, the password for the “VIP lounge” in SID is password, a fact I thoroughly enjoyed upon discovering it. But alas—the network doesn’t work, or at least it didn’t when I was there. I guess the joke was on me.

Sleeping on the floor of the airport is partly a question of economics, and partly a question of mere travel survival. You may not always know when you’ll be called upon to do it, but when you do know in advance, my recommended strategy is to prepare by carefully stocking up on blankets and pillows from the previous flight(s).

It helps to be in Business Class, because there will usually be a blanket and pillow. Good Business Class blankets must also be easy to borrow, however—some are so nice and fluffy that they are difficult to take off the plane without looking like an overconfident shoplifter. In these cases, a basic Economy Class blanket will suffice.

When you awake after a troubled sleep, hopefully not interrupted by police or third-shift cleaners, fold up any acquired blankets and leave them for the next weary traveler.

What can be said about the TSA in America? I have mixed feelings. On the one hand, many of them are nice, friendly, and even occassionally in good spirits. They are indeed “just doing their job” as the saying goes, so I try to be polite. On the other hand, some agents are on a power trip to intimidate travelers.

A few U.S. airports (SFO is the largest) are actually operated by private security that has entirely different rules than TSA-operated airports. When you ask why the rules are different from LAX or any other airport, you’re told “This is the way it is throughout the whole country.” No, it’s actually not—but that’s OK. Better to keep moving along and not protest too much.

I used to collect spoons from airlines around the world—but then I ran out of airlines. So I thought, maybe I’ll collect other kinds of silverware to compliment the spoon collection. I dutifully swiped a Virgin Atlantic fork on a flight to South Africa, but on my connecting flight out off JNB, they kept running my bag through the security machine over and over. Finally someone turned to me. “Sir, is there a fork in your bag?”

I had completely forgotten about it. A fork? What kind of idiot would pack a fork in his carry-on bag? Obviously not me. Then we opened the bag and found the fork. Oops. Since I already have spoons from twenty-five airlines, there won’t be any further silverware collections.

Earlier this year I went on a tour of Canada and visited many airports large and small, all starting with Y. Canadian airport security is much like the U.S.: different rules applied differently in different airports, but when you ask about the discrepancy, you’re told it’s all the same, there is no difference, you must be imagining things—as if you have no firsthand knowledge of the way it was yesterday in another airport.

They’re friendly enough about it, though, and after running the x-ray gauntlet, you can always look forward to a visit to the donut shop. This is because in addition to beginning all their airports with the letter Y, Canadian law also mandates that several Tim Hortons be strategically placed throughout every airport, no matter how small. And thank God for federalism! I do love a box of Timbits.

Many years ago I traveled homeward through CDG on an upgraded ticket and was given complimentary access to the Air France Business Lounge. Free croissants! Free coffee! Free vodka (although at 6am, I stuck to the coffee). This first lounge set a dangerous precedent—from then on, I was obsessed with getting lounge access, no matter the quality of the amenities inside. In KBL, for example, there is a regular seating area disguised as a Business Lounge—anyone can go in and sit, but there is nothing for the people inside. Weird.

Years later, the lounge obsession led to a more specific quest to gain access to the best airport lounges anywhere. FRA is an interesting place because travel is so segregated—it’s a notoriously unenjoyable airport to travel in Economy or even Business Class. But if you travel First Class, well, the story is much different. You get an entire terminal devoted to you, a chauffered car to drive you to your gate, and even a free rubber ducky in the spa room of the lounge. I didn’t get the duck when I was there, so of course I’m going back.

In HKG you can visit The Wing, which includes free bathtub suites. In ZRH you can have a drink from the longest airport bar in the world. In LHR you can visit the Virgin Atlantic Clubhouse and get your hair cut where Richard Branson does… or so I’ve heard.

These are the holy grail of airport lounges. If you are able to sneak into a lounge like this, you should skip your flight and stay there all day. You also deserve to start your own Travel Hacking Cartel.

P.S. Here are answers to the airport code challenge: