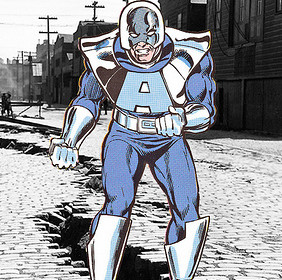 In an interview, Warren Buffett was asked what superpower he would like to be granted. His response: “I’d like to have the ability to read faster.”

I loved this answer, but when I shared it on Twitter, a few people said something like, “That’s dumb. If you read faster, you won’t retain the information.”

Ah yes, but it’s not about speedreading per se—since he’s a fairly smart guy, I’m pretty sure that Mr. Buffett understands the concept that we don’t retain everything we read. It’s not usually nice to assume, but in this case it’s a safe assumption that he’s talking about actually learning faster—the ability to consume and apply more information in a shorter period of time.

Here’s my response to the same question. If I could have any superpower in the world, of course I’d choose the ability to fly. Wouldn’t everyone?

A close second to flying would be the ability to become invisible at will. I’m not the only one who fantasizes about those superpowers, right? Both of them would have no shortage of fun applications.

But if I can’t fly or be invisible at will, I’d like to have this superpower:

The ability to always know exactly what to do next.

Harnessing this superpower would be of immeasurable value. I would be unstoppable. Instead, I sit at my computer for hours and think, “What’s next, right now? What’s most important at this moment?”

Sometimes—no, often—I get stuck. I have plenty of ideas, but I’m not sure what to do right now. Exercise or taking walks can help. Coffee helps. But I spend a lot of time staring at the screen, going from brick to brick, back and forth on things that are only somewhat related to what I really need to do.

When I do find the next step, I feel like I’ve stepped into a phone booth and emerged in a cape. I can fly! I can proceed with absolutely certainty. I’ve become unstoppable. And if you had this power, you would be unstoppable too.

When building a legacy project, or a business, or planning anything, the ability to have complete clarity about the next building block (not necessarily the whole plan, just the next step) would be a true superpower. Alas, like learning to fly or become invisible, this ability is elusive. That’s why you must periodically withdraw and ask yourself, over and over:

What’s the next step?

It doesn’t come naturally to most of us (that’s why it’s a superpower), but if you respect the process, you may find yourself endowed with this ability more often.

Happiness Is a Superpower

Questions to Ask When the World Isn’t Going Your Way

“There’s Nothing You Could Have Done … But What If There Was?”

What Would You Say If You Could Go Back in Time?
© 2023 The Art of Non-Conformity | Site by Bytegrow Technologies