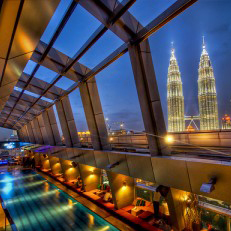 Greetings from Malaysia, my home for most of this week before heading back to my real home on Thursday.

After nearly getting deported from Riyadh, Saudi Arabia a few days ago, I managed to deport myself a few days later to fly this direction. It’s a really long story, one that I look forward to sharing in more detail later this week.

LIFE – I wrote about All the Things You Don’t Need, How to Convince Someone to Change their Mind, Sufficiency, and What Makes a Community.

WORK – I wrote about my visit to Seth Godin’s Alternative MBA Program, Learning from Everyone, and introduced the Unconventional Writing Contest.

TRAVEL – I wrote about The Monster Trip of 2009, and Conversations.

SITE AND STORE UPDATES – I wrote about Extreme Gratitude (NYC Edition), Escape from Cubicle Nation in PDX, and Utah and Continuous Improvement.

(P.S. Thanks to everyone who has been participating in the comments section. You guys are incredibly smart.)

I began my Monster Trip of 2009, taking me down to South America, where I completed my visits to every country on the continent. Afterwards, I journeyed to the Middle East and Persian Gulf, focusing on Kuwait and Saudi Arabia. What can I say about Saudi Arabia? Not really anything good, I’m afraid, but I’m getting ahead of myself.

I didn’t launch any new products, but the Working for Yourself and Art and Money guides continue to sell on a regular basis. Thanks for all your support – and we’ll have something new in August to compliment the existing products.

I now have a new “Product Wrangler” working with me and the select group of affiliates who promote the Unconventional Guides around the internet. I’ll introduce her to everyone next Sunday.

(The affiliate program is by invitation only because I want it to actually work. To apply, read this info and send me a note.)

I recently kicked off a writing contest with great prizes and the chance for the winner’s work to be featured here. A “Supreme Court” of volunteer judges will recommend a shortlist of finalists for my review.

The contest is open to all! Feel free to enter. By popular demand, I’ve extended the deadline to Saturday, July 18.

I’ll be wrapping up my big trip over the next week. Kuala Lumpur is actually my final stop, and I go home on Korean Airlines via Seoul, L.A., and Vancouver. After this trip I’ll be home in Portland for a full month before going out again towards the end of August.

Next Big Product Launch in 37 Days

On the 19th of August I skip town again after my month at home, so our plan is to launch the next Unconventional Guide on August 18th. This one is going to be really good, and the goal is to bring an excellent resource to an underserved market.

Why tell you this now – is it a magic pre-launch tactic? I wish. Instead, this is my attempt at public accountability. I have a great partner for this project (half of you are probably familiar with her work already), and I don’t want to let her down. August 18th is the day.

The Supreme Court and I will review the entries for the Unconventional Writing Contest and award the fortune and fame within about two weeks of the deadline (July 18).

In Kuala Lumpur, superstar designer Reese and I will be making some subtle, but important changes to the site. Watch and see. I think you’ll like them.

This month I’ll write about the following topics, among others:

* Going to Extremes
* (Almost) Deported from Saudi Arabia
* Around the World for $1,000
* Your Own Amazing Race

I hope you enjoy my writing, and I always welcome your feedback.

You can participate in the development of this project in several ways:

Leave a comment at the bottom of any article. Feel free to add to the discussion at any time, and include a link back to your own site if you have one. (Note that the link goes in the “web site” field, not the big text box where you write your comment.)

Follow my real-time updates on Twitter. I regularly solicit input on the articles published here, as well as send out links to other people’s great content. A “Daily Ass-Kicking” is included at no additional charge.

Send other feedback. Use my contact form here to tell me what you think so far.

The Results Are In!