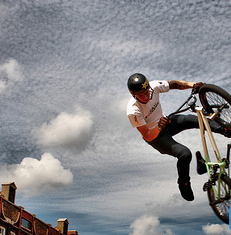 On the flight back from South America last week, the airline was showing Yes Man, a film starring Jim Carrey. Left to my own devices, I rarely finish a movie, but I watched the first two-thirds of this one and thought it was great.

The premise of Yes Man is that a guy who usually says no to everything – requests from friends, growth opportunities at work, and so on – has to make a sudden switch where his default answer becomes yes to any request he encounters.

As he says yes instead of no, his life dramatically changes. He gives away money on the street, signs up for guitar lessons, talks a suicide jumper down from the ledge, and so on. Like most movies created by committee in Hollywood, it’s highly formulaic – but I liked the message: instead of saying no to opportunities, why not find a way to say yes?

As powerful as that message is, however, I couldn’t help thinking about the vast majority of people who have gone to see that movie. The question I zeroed in on was, “What do you think most of those people thought and did after they left the theatre?”

Here’s my speculation. I think they thought to themselves:

“That was a nice movie. Jim Carrey is a good actor.”

And here’s what I think they did:

Absolutely nothing. As in, nothing different than before they saw the movie.

To them, the idea of saying yes to life is just a movie. That’s why movies like Yes Man are so popular: they offer a Cinderella fantasy for the practitioners of life avoidance. It falls in the same alternative universe as Spiderman – a good world to be immersed in for 109 minutes, but none of it is real, right?

Part of me wants to grab these people as they leave the theatre: “Hey! What if it wasn’t just a movie? What if you really got up tomorrow and decided to live that way? This is your wake-up call!”

Of course, I know that wouldn’t go over well. Some people are comfortable with living vicariously through Hollywood. It’s an easy, safe, comfortable choice, and I’d rather preach to the choir than evangelize the unconverted.

In the Rock-Paper-Scissors game of life, every day we have endless choices. Door A or B, blue or red pill, etc. Here are a few suggestions:

A few years ago, I started saying yes to things. It wasn’t a gimmick like the movie, and I didn’t say yes to everything – but I went from looking for reasons to say no and started looking for ways to say yes.

Conventional living is all about being balanced, well-rounded, risk-adverse, and safe. The problem is that well-rounded people rarely do anything interesting. Balanced people don’t usually change the world.

The alternative is to truly live, and come back tired – even if you’re not traveling. Be better than you have been before. Give more than you take. Embrace the extremes. Say yes.

That thing you’re working on today – will it matter one year from now? If so, great. Keep doing that. If not, why are you doing it?

Here’s wishing you well from my new home (for this week) in Kuala Lumpur, Malaysia. I hope all is well with you, wherever you are.

Chasing Daylight: Some Thoughts on Mortality

Things They Have No Right to Tell You