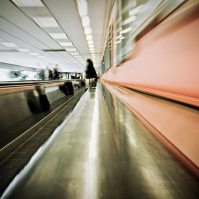 Greetings from SLC airport in Salt Lake City, Utah. Some airports have rules about carry-ons; this airport requires passengers to bring at least five children with them for their flight. It’s been a good week, but I’ll be glad to get home.

Each month I look back at what’s happened with ChrisGuillebeau.com in the previous month. If you’ve missed some articles, you can catch up here.

LIFE – I wrote about Building Influence to Gain Authority and Keeping It Real.

WORK – I wrote about Why People Hate Marketers, and The Secret Connection Between Art and Money.

SITE AND STORE UPDATES – I wrote about Creating a Location Independent Business, and Home Again, Good Marketing, and the Waffle Window.

(P.S. Thanks to everyone who has been participating in the comments section. You guys are incredibly smart.)

I went on two personal trips – one short vacation with Jolie, and another for both of us to meet up with family here in Utah. Otherwise, I didn’t plan on going anywhere in May, but Air New Zealand called me up and asked if I could hop over to the Cook Islands for a few days. Sure, no problem. That was fun.

The Unconventional Guide to Art and Money

I launched my first new Unconventional Guide in several months. Art and Money is all about the link between making art and making money. How can artists make money without “selling out”? What separates financially successful artists from starving ones?

The project was created together with Zoë Westhof, a freelance writer and fellow non-conformist living her own unconventional life in Chiang Mai, Thailand.

The response from the artist community has been great – in fact, it’s even better than I expected. Zoë is working on interviewing other artists to add even more perspectives and resources to the guide, and both of us are glad that so many people have been enjoying it.

I kicked off a writing contest last week with great prizes and the chance for the winner’s work to be featured here. A “Supreme Court” of volunteer judges will recommend a shortlist of finalists for my review.

The contest is open to all! Feel free to enter. I’ll post an update in another week or two, but keep in mind the deadline is Saturday, July 11.

Travel – I’ll be in New York City on a working trip from June 22-24. NYC friends, I’m doing a joint meetup with Jonathan Fields on the evening of June 23rd (location TBD).

After that, I get ready to begin what I’m calling the “Monster Trip of 2009.” This trip will be my longest of the year and will take me to four continents and fully around the world. I hope to complete all of my South American countries, a couple of new spots in the Persian Gulf, and head over to Kuala Lumpur, Malaysia before I head home.

Expect a full report with itinerary, cost breakdown, and adventures along the way. That kicks off on June 28th.

Small Business – I’m developing two more products with co-authors that are scheduled to launch sometime over the summer. I’ll tell you more when the time gets closer. Also, I’ll have an announcement about the Unconventional Guide affiliate program on one of the upcoming Sunday Store Updates.

Articles – This month I’ll write about the following topics, among others:

* All the Things You Don’t Need
* Around the World in Business Class for $1,000
* The Quest for Sufficiency
* Some of the People, All of the Time

I hope you enjoy my writing, and I always welcome your feedback.

You can participate in the development of this project in several ways:

Leave a comment at the bottom of any article. Feel free to add to the discussion at any time, and include a link back to your own site if you have one. (Note that the link goes in the “web site” field, not the big text box where you write your comment.)

Follow my real-time updates on Twitter. I regularly solicit input on the articles published here, as well as send out links to other people’s great content. A “Daily Ass-Kicking” is included at no additional charge.

Send other feedback. Use my contact form here to tell me what you think so far.