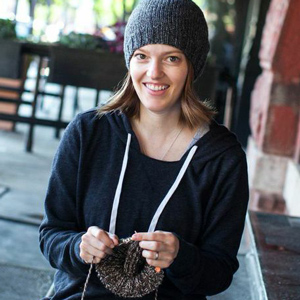 This is a “quest” case study, a new feature focusing on quests and adventures of all kinds. (Read others or nominate yourself.)

Adventure is for everyone, and adventure looks different to each person. For Robyn Devine, she found her big adventure by making hats—and not just a few of them, but a lot of them. Her goal: to make 10,000.

My name is Robyn. I live in Omaha with my husband and two kids. Since August 2009, I have dedicated every spare moment I have to knitting hats with the goal of giving away 10,000 hats in my lifetime.

Deciding to knit 10,000 hats and give them away was almost an accident. I’d learned to knit in the late 90s for fun. In 2008, my husband Zach decided to compete in a triathlon. Watching as he trained and trained inspired me.I wanted to do something big with my life, but I wasn’t sure what.

Fast forward a few months to me reading A Brief Guide To World Domination. I had a lightbulb moment on page 11. I’ve always known that I want to get out of life is to give as much as I can, but at that moment I realized I could do that so simply: by making hats.

It was so simple, in fact, that I was sure there had to be more to it. But the more I looked inside myself at what I really wanted to do with my short time on this Earth, the more I realized it really was that simple: Make Hats. Give Them Away. Change The World.

What are the costs associated with making the hats, and how do you cover them?

Honestly, I haven’t totaled up the numbers. I’m lucky—people give me yarn quite often, and I use that yarn exclusively on this project. Many of my hats are donated locally, but I also ship hats all over the country (and world) many times a year, so I pay something in postage. I’ve always operated with the belief that there will always be more yarn, and I can always donate hats locally if I can’t afford to ship them. So far, I’ve been right.

Have you encountered resistance or challenge in the project?

When I first started telling people I wanted to make and give away 10,000 hats in my lifetime, I think most people just thought I was a bit silly. Once my house started to fill up with yarn and it became clear to everyone around me that I was going to be knitting all the time, they took me seriously. Even then though, there wasn’t a lot of aversion from my friends.

To be honest, the biggest resistance has always been internal. I have a huge NO MORE HATS moment at least once a year. This usually means find myself thinking “Making this many hats is super crazy. Maybe I should just stop.” When I feel that way, I take a breather, knit something else, and before I know it I’m back in the game!

Have you met anyone interesting during your quest?

I’ve met amazing people. People who email me to tell me they had never considered giving their finished knits to charity until they stumbled across my blog, and now they’re obsessed with making hats and giving them away. People who have set up their own hat making challenges. People who have gotten connected with nurses at their local hospitals and started donating hats regularly to oncology centers and maternity wards. People who didn’t know that they could make a difference in our world and are now heroes in their communities, all because they make hats and give them away.

What is it about hats that you like so much?

I think that’s how I see small acts making a big difference. When you knit one hat, it’s just a hat. It’s “knits and purls” made on repeat, something that takes me just about 4 hours on average to finish. One hat won’t change the world. But one hat and then another, and then another? All those hats stacked up together, packaged up and sent off to folks who need them? That can make a difference.

I’ve gotten tearful hugs from nurses who know all too well just how much a handmade hat means to the parents of a baby born 10 weeks early, or a 16 year old who has 8 more rounds of chemo and has lost all her hair. People know that a handmade hat was made with love worked into every stitch, and I think that makes a huge difference in the lives of the people who receive the hats I make.

Do it! Looking back on when I started my quest, I definitely had no idea what I was getting into, in the best possible way. I’ve learned so much, not just about knitting, but about myself.

I think the most important thing I’ve learned about myself is my capacity for doing great things. Initially, finishing 100 hats in a year seemed ludicrous. By the time that I hit that goal, I knew I could do so much more.

We hear you might be making hats for readers. How can they get a hat from you?

It’s true! I’ve partnered up with Joel Runyon for his 777 Project – he’s running 7 ultra-marathons on 7 continents in the next year, to raise money to build 7 schools! I’ll be listing hats in my She Makes Hats shop starting October 1st, donating all of the proceeds from each sale to the cause. My goal is to raise at least $5,000, and hopefully raising the bulk of that before the end of the year.

Hats will cost $40 each, but $30 of that will be donated to the 777 Project. In addition to donating money, I’ll also be donating a hat to someone in need for each hat purchased from the shop—so everyone who buys a hat will be doing twice as much good!

Learn more about quests and adventure in my new book, The Happiness of Pursuit. It’s available from Amazon.com and your favorite local bookstore. 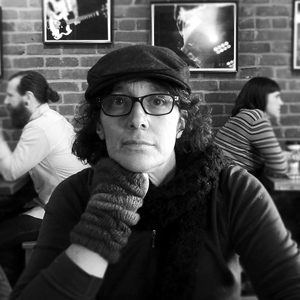