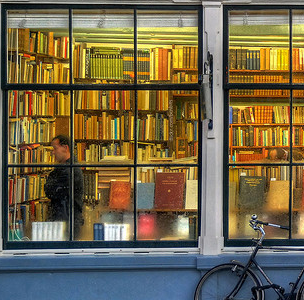 I went back to the Tattered Cover in Denver last night. Love that store! Fun people. I remembered being there two years ago.

At the time, The $100 Startup was selling really well and there were at least 150 people at every tour stop. I was feeling good. In Denver that night there were more than 200. The store manager seemed impressed.

“You don’t always have this many people?” I asked.

After I heard her answer, I realized why I’d asked: I wanted her to say, “No, never! This is a huge crowd!”

But that’s not what she said.

“This is really good,” she said. “It’s true that a lot of authors can’t bring out this many people.”

And then she went on. “However, we’ve done some really big signings recently. The Diary of a Wimpy Kid guy was here and the line went around the block.”

The Tattered Cover is not a small store, especially in their suburban location where I was doing the event. It’s basically like a Target store that only sells books. I’ve had lines around the block a few times, but not at Target.

“Oh,” I said, already regretting the conversation. “How many people was that?”

“We stopped counting at 2,000,” she told me. “We had to get security for him, and he brought along a team to help sign the books.”

Part of me felt a little sad, in a weird way. There I was with a group of amazing people, yet I felt like a failure all because another author (who had nothing to do with me, and who deserves every success) had been able to reach a massive audience.

Comparison truly is the thief of joy. There will always be someone with more money, more sex appeal, more blog readers, or whatever your metric.

So you must remember to avoid the comparison game. You must be responsible for what comes into your life. Grow and challenge yourself—yes, strive. Work hard and seek to improve however you can.

But do not give in to the temptation of always trying to have more than others, because someone will always have more than you. And that’s how it should be.

Last night, back at Tattered Cover, I had a great event. People came from all around, and it was standing room only after the store put out 180 chairs. This time, though, I didn’t worry if I was doing “better” or “worse” than anyone else. I just tried to tell good stories and bring together a great community.