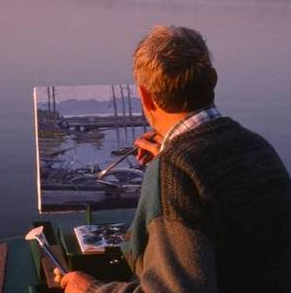 They considered how to spend the time they had left together. There were thoughts of trips to Hawaii or the Galapagos, but Genn wanted to end his life as he had lived it: in his studio, making art, with his family close by. James fashioned a reclining chair so his father could continue to paint, lying down, as his illness took a physical toll. “He made it his mission to go as long and as far as he could with a paintbrush in his hand, and he was painting small canvases right up until the last few weeks,” James said.

“There’s a thing in the culture that says, if you’re given a year to live, what would you do differently? My dad did the exact same thing in the last year of his life as he had been doing for the first 77 years,” Sara said.

Link + Image: With a Year Left to Live, Here’s What Robert Genn Did

Lessons from an Errant Rocket Ship

The Game Is Rigged, So Learn to Play the Game