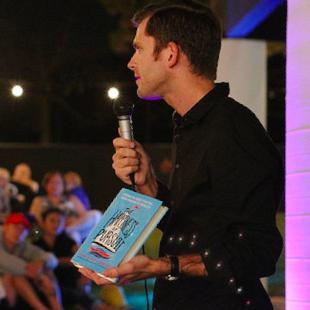 “Have you seen this book yet? I actually wrote most of it myself.”

Over the weekend I headed home for a brief pause in my adventures to 40 cities to meet with readers as part of our fall book tour. It’s been exhausting (per usual) and also very fun (per usual).

A few nights beforehand I was in Orange County (here’s an attendee review), and the local group that hosted me produced the event as a fireside chat in a wonderful outdoor space.

Awaiting the arrival of the critical beer and wine cart.

A few quick observations from this tour:

I’m giving an all-new talk about quests and adventures. It’s been fun to develop it. I talk about video games, visiting every country in the world, and what we can learn from others who’ve undertaken quests and big adventures. I issue a challenge to the audience, because I believe that every good book challenges the reader in some way.

Is it worth it? Of course it’s worth it. It’s always worth it. It’s not always about a direct return-on-investment, though. We sell an average of 40-60 books every night, to an average audience of 150 people. There’s a lot of energy and good conversation, but this isn’t a sustainable endeavor on its own. I could reach a much larger audience by working primarily online, but for the most part, I don’t think of the ROI this way.

Instead, I think of it as building and maintaining a series of long-term relationships with people who care about my work and are doing interesting work of their own. The in-person stuff matters, and it’s also a lot of fun.

Chillin’ on the lawn

As always, the readers are the best part of the tour. I’ve been hearing more and more great stories of other people’s quests and adventures. You guys are doing some amazing things! I’ve heard from readers attempting quests of all kinds, from others who are going to every country to a children’s book author visiting every independent bookstore in California, and many more.

(And stay tuned, you’ll see many of these stories coming up in our profiles series.)

“How many of you have ever played Super Mario Bros.” (I ask the group this at the beginning of the talk.)

Going on book tour isn’t really about travel. I see very little of the cities I’m visiting, and that’s honestly okay. I travel 200,000+ miles a year and have no shortage of opportunities to explore. But during this time, the entire focus is on the events with readers and the media I do during the day.

I try to make decisions in support of those goals. Whenever possible I take taxis instead of renting cars, so that I can answer emails and catch-up on other work while heading to the hotel. Speaking of hotels, I stay as close to the venue as possible. At night I head back, eat dinner around 10pm, and eventually fall asleep around midnight.

It’s a later schedule than I usually keep, just due to the nature of having events most evenings. If I get the chance to stay in the same hotel for two nights instead of a row, I’m really excited. But even when moving onward to a new place, day after day, I’m still eager.

I have miles to go before I sleep … and I’m excited to keep going!

This week I’m in Toronto (7pm Wednesday night at Indigo Manulife Centre). Next week, I’ll be in Calgary, Edmonton, Ottawa, Montreal, and Vancouver. Then I’ll back in the U.S. before continuing on to events in Mexico and India.

I hope to see many of you along the way!

“No charge for the book stamp”

Tags: book tour, happiness of pursuit, on the road

Announcing The Happiness of Pursuit (and please, join us!)

Lessons from the Journey: Unhappiness Can Lead to New Beginnings

If You Lost Everything, Would You Look Back or Look Forward?
© 2023 The Art of Non-Conformity | Site by Bytegrow Technologies