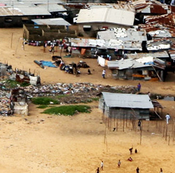 I did an interview about Liberia with the people behind Maptia, and I liked the introspective questions they asked. You can read the full article here, or check out an excerpt below.

Monrovia certainly sounds like a complex and unusual place, affected deeply by both the geographical and political climates. We imagine that you must have experienced many sides of the city while you were there. Was there a single place or region in Monrovia that you felt was the heart of the city? Somewhere that somehow captures the very essence of life there? Or is it a more disparate city, with pockets of energy and culture spread out across its sprawling expanse?

There are a few major areas. We were living on a hospital ship docked at the port, so that was the part of town in which I was the most familiar. I remember rotating out on night watch in an attempt to prevent thieves from swimming out into the harbor (against the current!) so that they could climb on board the decks and steal whatever they found. One morning we woke up and all of our deck chairs were gone. In some ways I was impressed. It took a lot of skill to pull off a chair heist in the middle of the night while surrounded by water and 400 sleeping crew members.

I also remember running a half-marathon one morning on my last weekend there. The only peaceful place to do it – where I was assured of not being run over by the lawless traffic – was up and down a long strip of land near the port entrance that was guarded by Bangladeshi soldiers assigned to the U.N. Mission. I ran back and forth for two hours, waving at kids who walked by.

To end on a more reflective note, in your TEDx talk on Fear and Permission, you quoted Hafiz, a Persian poet, and spoke about how the small man builds cages for everyone he knows, while the sage, with true courage, keeps dropping keys all night long for the beautiful, rowdy prisoners. It seems to us that the most recent chapters of your life (which have been about as far away from unremarkably average as you can get) have been dedicated to crafting, and then dropping, wonderfully imaginative keys for the rest of the world to pick up. Of all of the projects and adventures you have undertaken during the past decade, which have affected and changed you the most, and have come to shape the fabric of your life as you move forwards?

What a great question, and thank you for the kind words. I’ll pick two: a personal one and one that involves other people more directly.

On the personal side, going to every country was an 11-year odyssey. When I started I had no idea if I could actually see it through, partly due to all of the expected logistical challenges, but also because I had a history of starting things and then stopping them just as they were getting off the ground. This bad habit frustrated me, and I wanted to conquer it. Thankfully, I never really got bored with this project. Being able to stay on track all the way through a lot of random countries felt good.

But about halfway through the “go everywhere” quest, I also realized I wanted something more. When I started holding meetups with my readers in various cities, I found what I was missing. Then we held the first World Domination Summit in the summer of 2011, and 500 readers came to Portland for a weekend. Last year we had 1,000 people, and this year we’re bringing 3,000.

This project in particular is very much about community, and I’m glad that people have engaged with it in so many ways.

Update from Kuwait on the Writing Contest