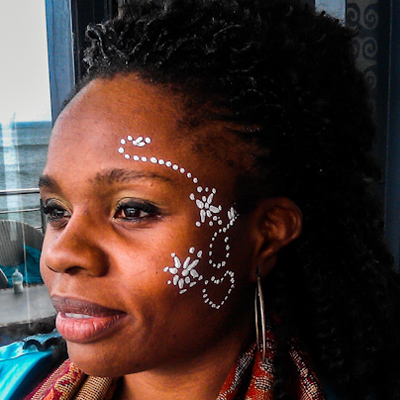 When no one else believes in your dreams, sometimes they get lost in the shuffle until you find the strength to believe yourself. Lola Akinmade Akerstrom was a systems architect who’d dreamed of making a living of travel since she was a child.

I was born and raised in Nigeria. I had an insane obsession for geography and outlandish dreams including traveling the world, becoming a best-selling author, and working with National Geographic. Considering the traditional trajectory where African children are supposed to accumulate as many high level degrees as possible, find a high paying job, get married, and have kids, my dreams weren’t taken too seriously… even by myself. I moved to the U.S. and started college at 15, graduated by 19, and became a systems architect.

But dreams have a habit of popping back up. Even when I was developing and creating interactive maps, I was always back in that mental space of traveling the world and finding the opportunity to be paid to do what I loved.

How did you transition into full-time traveler?

In 2002, I came across an ad seeking volunteers for the Eco-Challenge Expedition Race in Fiji. I applied and was selected to join the field journalist crew. As part of the job, I got up close and personal with the competitors. If they were kayaking down a river, we were in a long boat right next to them. If they were biking, we were driving alongside, and if they were trekking, we were trekking with them.

When I returned to the States, I began a transition toward fulfilling my outlandish dreams. In 2009, I resigned myself from that life with a traditional trajectory. Now I’m a Stockholm-based travel writer and photographer who contributes to several high-profile publications and whose photography is represented by National Geographic.

I come from a family of travelers so wanderlust was always in my blood. But I found my calling as a travel writer and photographer while wading across the Navua River in Fiji, snorkeling off the shores of Wayasewa Island, drinking kava with the villagers of Navala, driving around busy Nadi, and pushing a muddy van stuck en route to the remote Savioune Falls.

If there ever was an a-ha! moment for me, that was it. I knew I wanted to be a purposeful traveler.

What does traveling mean to you?

Travel isn’t fashionable to me. It doesn’t always have to be about volunteerism either. To me, travel means listening. Listening to a place—wherever it may be—and trying to understand it as best as I can and respecting it in a way that personally links me to it, too.

When I moved to the U.S. as a teenager, I felt many people really didn’t listen or want to listen to me. They weren’t truly interested in my culture, my values, and my homeland. They were content with categorizing and compartmentalizing me, subconsciously trying to define boundaries for me.

So as a traveler, this is what naturally makes me want to invest in the people and places I visit. For lack of an original metaphor: travel continuously weaves me into the fabric of each culture, which in turn continually opens up my mind, and the minds of others I meet.

If I’m still struggling to hear a place’s voice and heartbeat, I’m willing to go back and back and back again until I hear it loud and clear, chucking out any bucket lists I’d initially followed. For me, where I’ve been isn’t as important as remembering human experiences and connections that I’ve made in those places.

Can you tell us a story about listening?

Yes, but it’s actually about listening to myself. When I was pregnant with my second child, we took a quick family getaway to Cyprus. As I soaked up fresh ocean breeze to keep my morning sickness at bay, I questioned why I loved to travel, why people love to travel, and how this affects those of us who want to start families while still keeping that wanderlust alive and well.

As I watched my daughter and husband chase each other across the beachfront with waves thrashing in the background in Paphos, it was all about the moment. The epiphany for me was that while I could dream about future travels, being fully present in my life instead of wanting to be someplace translated no matter where I was.

This idea helps me soak up moments while traveling without being distracted and always having to flip out the smartphone. Trying to consciously stay in the moment keeps me invigorated, excited and curious like I was leaving on a jet plane in the morning when in fact I’m just heading out to brunch at my favorite local eatery.

I’m filled with wanderlust but it’s a controlled type of wanderlust that redirects energy into exploring my current place until I can head off to go explore another.

Before kids, window. After kids, aisle. Nothing beats quick access to the toilet.

What has surprised you on the road?

Having grown up in a tough boarding school and roughing it a lot during those days as well as on many of my travels, the older I get the more I’d rather not rough it if I don’t have to. This means choosing hotels and rental apartments over hostels for privacy, not necessarily luxury travel.

Have you met anyone interesting?

This encounter has always stuck with me: I was visiting the Terror Museum (which contains exhibits about the dictatorial regimes in 20th-century Hungary). Within its bowels, I met an old man. He was shaking, and he seemed perplexed. Anxious to find someone to share his story, he found me. He pointed to a cold dark room. “That was my cell,” he cried to me. “I was there.”

I’m featured in a 1-min vignette about South Africa that airs on National Geographic Channels across the world. I’m humbled at how far I’ve come since I quit my job.

Heading back to the U.S. and Germany are on the immediate radar. Then to more places, I’m sure.

The Beauty of Traveling Solo: On the Road with Megan Van Groll
© 2022 The Art of Non-Conformity | Site by Bytegrow Technologies