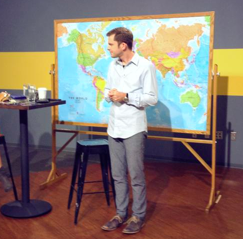 On Sunday I went down to San Francisco, met up with my friend Stephanie and began preparing for the day-long CreativeLIVE workshop on travel hacking.

The session was fun and intense! Comments and questions for the #travelhackLIVE hashtag were so numerous that the course began a trending topic on Twitter. Viewers crashed Stephanie’s website at one point after she shared a travel hacking road trip story.

More than 10,000 viewers tuned into the free live broadcast, which went on for 7 hours. If you missed it, or if you’d like to own it to watch in entirety whenever you’d like, you can purchase access here.

The day before the big workshop, I hosted a Reddit “Ask Me Anything” session in between production meetings. Here’s a selection of some of the questions and attempted answers.

Did you set out from the beginning to visit every country?

No, at first I just started traveling. I volunteered for a medical charity in West Africa from 2002-2006. During that time I visited about 25 countries and began to get comfortable with going to places that were off the beaten path. After that I set a goal of going to 100 countries “sometime in my life.”

Then, as I started working toward the goal, I realized that 100 countries wouldn’t be that difficult because I could pick and choose the easy ones. Once I was at about 80 countries, I officially set the goal to go to every country.

Did you travel much as a child or young adult with family/friends? I’m curious how your personal journey evolved in this regard.

When I was a kid, I had a stepparent who was stationed in the Philippines and I was dragged along for two years (not drugged, but that could have happened too). At the time I wasn’t very excited about it, because it meant that I was separated from my dad the whole time.

Travel-wise, though, it was good to have a strong cross-cultural experience at a young age. I was six years old and remember riding jeepneys to buy fireworks and ninja stars, which I then smuggled back to my room. I’ve often thought back on those years, especially once I started pursuing travel more actively.

Did you have any outside funding or sponsorship for all the initial traveling you did to all 193 countries? Were you doing any remote work at the time?

No outside funding or sponsorship. Other people have done it with those things and I don’t think that’s bad per se—I just wanted to be more independent. Yes, I worked remotely from wherever I was. On some trips I had to work more than others. I never really took vacations, but that’s not a complaint. I get bored trying to relax, so I’m always working on new projects.

Do you have a favorite international dessert?

What gear (gadgets, luggage, etc) do you usually take with you? Anything in particular you never bother taking?

I’m pretty basic. Everything fits in a carry-on bag (Briggs & Riley) and a laptop bag (Tom Bihn). The thing that takes the most space is my running shoes. I take the same clothes with me wherever I go. Tech-wise, I always (always) have my laptop and iPhone. I’m working almost everywhere I go, usually for about half the day. The other half is transit, sightseeing, or meeting up with friends and readers.

How many times have you slept in an airport, train, or bus station?

Dozens and dozen of times, especially airports. Ironically some of the worst experiences were in places that you might not expect to be miserable: Rome, Paris, Dallas, JFK, etc. Of course, sleeping on the floor of an airport in central Africa isn’t great either, but I didn’t really plan on visiting TGI Friday’s there.

Is traveling full time a worthwhile pursuit? My little startup is making enough for me to be able to travel and work full time.

Congrats on your startup! If it can support you traveling full-time, it doesn’t sound that little to me.

In my case it’s been great to have a home base (Portland, Oregon) from where I can come and go instead of traveling full-time. But plenty of other people do pursue full-time travel, at least for a time.

Nauru was odd. Aside from Australia, it’s the only country in the South Pacific that requires a visa in advance. None of the info I read in advance indicated this fact, and I was denied boarding the flight in Brisbane on my first attempt. I regrouped, got the visa, and was able to visit a few months later. It’s a tiny, tiny place with very little to do.

The high point for me was going for a run up and down the actual runway, which is only used as a landing strip twice a week when the plane from Brisbane returns. The rest of the time, people go out at sunset to walk along it or play soccer on it.

How do you decide when to use points for airfare or just pay for it?

A couple of considerations:

1. What’s the retail price? (General rule is: pay for cheap tickets, use miles for expensive tickets.)

How do you manage travel and marriage?

I’d be the first to say it’s sometimes a challenge. She deserves far more of the credit for making it work than me, I’m sure. In the early days we talked a lot about how much time we’d both be comfortable being apart, and for the rest of the journey I was usually able to stick to those parameters.

Have you had an airline dispute miles gained from your practices? What was their response?

No, I don’t believe so. It’s important to realize that airlines benefit from the Frequent Flyer mile programs they set up. In many cases it’s a profit center for them, not something that is an expense.

Have you been banned from any airline for your creative thinking? Which ones?

I had a dispute with Egypt Air and they withheld my passport in Cairo. They wanted me to pay them $600 (long story) and I preferred paying them $0 and receiving my passport back. Finally they agreed to return my passport as long as I signed a piece of paper saying that I would pay them later. I signed it “Under Duress” and wrote “This is bullshit”—but as the guy explained it, that was good enough for him and he returned the passport. I’m not sure I’d be comfortable flying Egypt Air again, though.

I didn’t stay in North Korea proper. I went on the Panmunjom tour from Seoul, where you can visit the point where both sides hold talks and view the room that divides them. It’s technically possible for Americans and other Westerners to actually stay in Pyongyang if you go from Beijing on an organized tour. I haven’t done that yet.

Have smartphones changed the way you travel?

Definitely. First and most obvious thing: Despite having visited every country in the world, I get lost everywhere I go. Thanks to handheld GPS, I can now at least find my way home from the nearest coffee shop.

In the 7-hour workshop I also took dozens (and dozens, and dozens) of questions from viewers. I love having the chance to talk with people about life and travel.

I’m now back on the road for a couple of other domestic stops before heading back to Portland next weekend. Wherever you are, I hope you’re doing well.

Round-the-World Tickets Revisited: How a Single Ticket Can Take You to 16 Cities + Earn 40,000 Qualifying Miles