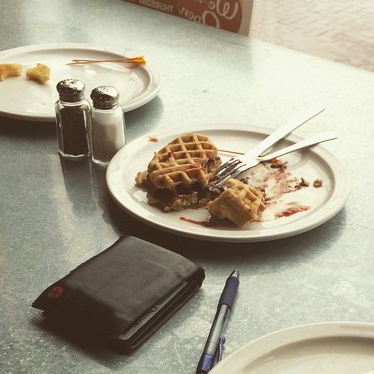 We did it! As mentioned, last week my travel hacking colleagues and I took on a mini-quest of going to 12 specific restaurants in Portland in a single day, all in pursuit of miles and points.

On Friday morning, we set out at the crack of dawn 8:30am with an ambitious goal: To visit 12 restaurants throughout the city. We wanted to achieve all 12 of our qualifying “dines” (any purchase at the participating restaurants, no minimum) to earn VIP status with Rewards Network in a single day.

My friend Stephanie and I did this last year in a more limited (though still awesome) fashion. This time, we wanted to increase the challenge. We invited another friend, Tyler, to come along, and we also invited others to participate virtually.

At the end of the night we had a small celebration at the Triple Nickel, a hilarious—in the best of ways—pub in my Southeast Portland neighborhood.

To recap, here are the rules of the challenge:

Rules of the Dining Dash

Every adventure has rules. Fortunately, the rules we follow are pretty simple:

1. Everything you purchase on Dining Dash day must come from a qualifying restaurant

2. Aside from tap water, you can’t consume anything on Dining Dash day that doesn’t come from a qualifying restaurant

3. This isn’t about spending as much money as possible. In fact, it’s the opposite: you want your “dines” to cost as little as possible while still having fun and respecting the spirit of the adventure. Many dines can be completed for less than $10, and several for less than $5.

Note: Tyler decided to raise the stakes even further: his goal was to complete all 12 dines for less than $50, not including tip. File under: A new challenger has entered the ring. Update: here’s his own report.

This brings up a good point: how we handle the situation of visiting restaurants with several people each ordering the least expensive item on the menu and requesting separate checks. Before everyone jumps to conclusions, understand that we always tip our servers well—often 50% or more, and in a few cases 100% or more.

I also learned a good lesson from Tyler: Sometimes the easiest explanation is best: “We need separate checks because we’re on an adventure to visit 12 restaurants in one day.” By explaining this to our servers, we found that a lot of them were actually on our side and completely happy to help.

You can read a rundown of all 12 of the visits below if you’d like. For now, the key points as they relate to you are as follows:

1. Make sure you’ve signed up for rewards! It’s free and easy. All you need to do is register for the program of your choice and link your credit + debit cards.

You can access the signup portals from these links:

Note: There are some other partners you can choose to earn miles or points with, but unless you have a compelling reason to do something different, I’d recommend you go with one of those.

2. You can use any credit or debit card that you’ve linked to the account, and you’ll automatically earn miles.

Most of the time I dine out, I use my Chase Sapphire Preferred card, since it earns 2x points for all restaurant spending—and this Friday is “First Friday,” where you can actually earn 3x points. Bonus!

Funny story: whenever we go out in groups, servers and bartenders often comment on the fact that so many of us are all using the same card. There’s a good reason for that! It’s the single best card for ongoing travel and dining spend, which are pretty much always my largest categories of spending.

OK, that’s it! Here’s how it went down, starting with our first visit and continuing all the way through #12.

We met up in downtown Portland and began the adventure. Isabel’s isn’t a new place for me; I like it a lot and am usually there at least once a month. Our server was good-natured about splitting our small checks, and he wished us well for the rest of the day.

This place seemed a little random, but we found it on the Rewards Network website and it was close to Isabel’s. Tyler and I ordered the waffles while Steph went for an egg and cheese on a bagel.

I had the Nutella and Strawberry waffle, which in retrospect may not have been the greatest choice. Next time, I’d stick with either nutella or strawberry jam, not both.

It’s definitely a great place for an easy dine, though.

Like Isabel’s, I’ve been to the Doug Fir many times. On this visit I was charged only $1.50 for my fried egg, and Steph was charged only $2 for a large pancake. Great value! Pro Tip: Order from the “sides” section of the menu.

At this stop, the local rep for Rewards Network dropped by to say hi. We had a great chat, with us asking her a bunch of questions about the operations of their business in cooperation with airlines and hotels, and her asking us a lot about other kinds of travel hacking.

Throughout the rest of the day, the Rewards Network folks checked in with us on social media, and in some cases even advised the restaurants that we were coming. (We didn’t ask for any favors, and we didn’t accept any gifts.)

Our next two stops were simple and cheap. We went to the Pacific Pie Co., a wonderful place run by Aussie expats living in Portland. Naturally, they make amazing pie—but at this point in the morning, after three breakfasts, none of us were in the mood.

Steph and I each had coffee, while Tyler bought a $3 tonic water. Mission accomplished!

Later in the afternoon, I wished I’d picked up a slice of pie for the road, but we didn’t want to go back to a place we’d already been to. Another lesson learned: never pass up a good slice of pie.

What can you say about the Pita Pit? If you don’t live in a city that has any sort of authentic Mediterranean food, it might be the perfect lunch spot. Or if your idea of foreign food is Outback Steakhouse, then you’ll also love Pita.

When Tyler and I each bought chips, and Stephanie bought an apple juice, the cash register clerk asked if we were just buying them to use the restroom. Nope, we had a task to complete.

We got out of Pita Pit as soon as we could and kept moving. Following a short break, we regrouped for afternoon Happy Hour.

Hoda’s, a Lebanese place, is right down the street from my house. We met back up and each ordered the falafel salad, which was surprisingly large for just $4.

It was a great afternoon snack, and a nice start to our second round of visits.

This place seemed pretty cool, but I had hit a slump after not having much of a break. I ordered hibiscus tea (just $2) and sat at the bar. Steph had $2 popcorn and Tyler also had a tea.

We each did some emailing from the bar, then headed outside to keep going.

This place brought us back to life, and it wasn’t just the $2 vegan jello shots (made with tapioca) that we ordered. Tyler and I walked in and were promptly evicted by a passive-aggressive dude who made it clear we weren’t welcome. Apparently we were “way early” even though they opened at 4pm and we arrived at 3:59.

If it were me, I would have given up—but thankfully it wasn’t just me. Stephanie arrived on the scene, and after discussing the situation on the sidewalk, we decided to give it another try.

This time, the passive-aggressive dude was nowhere to be seen, but another bartender who couldn’t be friendlier had taken his place.

He told us they had a $5 minimum credit card charge, but we had an idea: “Charge us $2 each, and we’ll all tip $3 on top of it.” It was a win-win scenario for everyone, and he accepted the offer.

Low point: being kicked out.

High point: meeting the awesome bartender who had an artisinal explanation of the vegan jello shots. So fun!

Another nice spot that none of us had ever been to. We found it through Rewards Network, and the staff couldn’t have been friendlier or more accommodating.

Two thumbs up! I’d love to come back at some point and order actual food.

Our group had grown by this point, and we were now six people going into the final three stops. This “goth Mexican” place in SE Portland has a nice happy hour, with items as cheap as $3.

You have to purchase a drink to benefit from happy hour prices, and most of us went with club soda after the beer + jello shots of previous stops, and in anticipation of more drinking to come.

I love going to a church that serves bourbon. By now we were all pretty tired, but also in a celebratory mood. We’d almost done it!

In fact, we were early. We rolled into Church at 7pm, a full two hours before we had to be at Triple Nickel. Damn—that was unexpected.

Our group had grown to include a few other folks by this time, and we also invited readers and friends to join us for a big celebration at the end of the tour. Our new pals at Rewards Network had advised the staff of our visit, and they brought on extra team members to prepare for our arrival.

Aaaaaaannnnnndd…. we had done it—12 dines in one day! It turns out that running around town while eating and drinking is surprisingly tiring. By the end of the night, we were all worn out.

We celebrated with a shot of our favorite classy beverage, Fireball Cinnamon Whiskey (their slogan: “Tastes like heaven, burns like hell”). This delicious drink—flavored like red hots—is well-known in dive bars throughout America, and at $2 each it was a great investment before we all went our separate ways.

Remember: you don’t need to go to 12 restaurants in a day to earn points and miles. But we did it anyway, and it was a lot of fun.