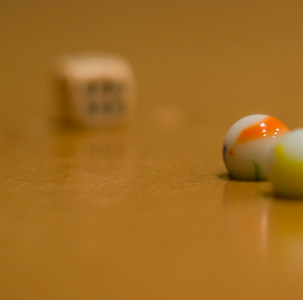 On my recent book tour, I usually began each night’s talk with a story about playing Super Mario Brothers with my grandma. Her name was Regina but we all called her Nana, and she’s been one of the most important people in my life for as long as I can remember.

I had a difficult time for much of my childhood, some of which I’ve talked about publicly and some I haven’t. I was a juvenile delinquent and confined in different treatment centers off and on for several years. During those years, the adults in my life all said nice things about how they wanted me to be okay. I’m not sure they always knew how to handle the situation or what they should say, but they meant well.

What I remember, though, is that Nana was always consistent in her love for me. She never bothered or hassled me about anything. I’d go over to her house and she’d make Kraft macaroni and cheese, just the way I liked it. We’d play Monopoly or Skip-Bo and talk about whatever I was interested in.

We also spent a lot of time working in her garden.

One time, when I was maybe six years old, I did something bad while we were gardening. I don’t remember exactly what it was, but it was something that upset her. Nana rarely got upset, and she almost never corrected me. But that day, I had either told a lie or said something mean that was over the line.

In that one instance, the only one I can recall, she got mad at me and I immediately felt terrible. Thirty years later I can still remember the feeling of shame, for something I’d done that caused her to be disappointed. But even though she was mad that day in her garden, she didn’t hold it against me for long. She just said something like, “That’s not good, you shouldn’t do that” and then moved on.

I felt happy and safe with her in a way that I didn’t always feel around other adults. We played card games and board games and video games. We’d go to the mall and to Toys R’ Us. I wasn’t always the most reliable grandchild, with all the moving around and everything associated with coming-of-age in all the treatment centers and homes. But she was always there for me, as a kid, as a troubled adolescent, and as a young adult. I could always count on the Kraft mac and cheese, and I could always count on Nana.

Nana outlived two husbands and also one of her sons, who died from a brain tumor when he was young. When she turned 71 she told everyone she felt like she was 17. She continued driving even after she probably should have stopped. With her second husband, a kind and generous man from Michigan, she would “visit the old people” to deliver meals as part of a church program. As the years went on, she was in her mid-seventies and some of the people she cared for were a decade younger. But that was Nana’s way, jumping in the car to visit the old people who didn’t always have the same vibrancy of life that she’d held onto.

As she lost other friends and relatives yet still remained strong, I honestly thought she would outlive our entire family. I imagined losing other people and being able to talk about it with her. Over the past couple of years, though, her mind began to slip a little. She would repeat things a lot, sometimes in a funny way.

When my brother and I visited, we’d make a game of it. She was always (always, always, over and over) asking visitors if they wanted something to drink. She had a refrigerator that was used entirely for soda, which she called pop, and candy bars.

If she hadn’t offered us anything to drink in a few minutes, I’d look at my brother.

“Hey Ken, do you want something to drink? Do you want a pop?”

That would set her off and she’d start telling us about all the different sodas she had in stock. Finally, after we had all declined numerous offers of several beverages, we’d move on to something else. But every ten minutes we’d return to the same subject and it would be as if we’d never discussed it before.

“Do you want something? There’s pop in the fridge.”

I’d start to decline but then Ken would speak up.

“Well, I’m okay, Nana … but is there any milk? I think Chris wants some milk.”

The rest of the family would give us the evil eye for playing this game. But we weren’t making fun of her—in some ways it felt like we were sharing an inside joke even as everyone else looked on. As sharp as she was, I wouldn’t be surprised if she was in on it somehow. We were still doing it as we left her house and went out to dinner on our own. “Hey Ken, do you want some beer? There’s beer in the fridge.”

Despite the onset of dementia, she was doing amazingly well when she turned the young age of 88 this summer. I visited twice in the past two months, something I hadn’t done very often before. On our last visit, we played one more board game. She hadn’t played for a long time and was increasingly confused about a lot of things, but she remembered the rules and made the right choices as she moved her pieces around the board. And then she beat us! We didn’t let her win—the victory was hers, fair and square.

When I left that night, I gave her a hug and said I loved her. It was the best possible visit. I didn’t drink any sodas from the fridge and I lost at the game, but it was great to see her looking relatively healthy.

This is my nana (grandmother), who is 89 years young. When she turned 71 she told everyone she felt like she was 17. She may feel a little older now but is still going strong. I was glad to see her this morning before heading on to tonight's book tour stop in Nashville. Happy Monday to all … and if you have any youthful elderly relatives, maybe you should pay them a visit. #ontheroad #findthequest #family

Strong as she was at the young age of 88, sometimes an incident can trigger a health crisis that has lasting consequences. Last Saturday, she was admitted to the emergency room with acute pain. Upon diagnosis, the doctor said she’d need immediate surgery, which he didn’t recommend at her age and in her condition. She declined the surgery in favor of palliative care.

Hard as it was, I was glad she made that choice. She had often talked about wanting to die with as little prolonged pain as possible. She even used a phrase all of her own in making the decision: “No thanks, I’m ready to check out.” When I heard she’d said that, I smiled even as I was sad.

She was given a high dose of morphine. After she fell asleep, we thought she might wake up again at some point in the next day or two, but she never did. The following night, around 1:40am, she died.

I wasn’t there that night, having just made it off book tour to my home 2,500 miles across the country, but I didn’t need to be. She was unconscious after going on the morphine, and I was content with the other memories I have of working in her garden, walking around the mall, playing tetherball and video games, and all those bowls of mac and cheese in her kitchen.

I’m not always good at maintaining strong relationships with people I love. I know I should be in touch more often, but I just don’t do it. Sometimes I’ve caused harm or been selfish or just haven’t followed-up well.

Once in a while, someone at an event asks about family and relationships, and I usually say something like, “Well, I write about starting a business for $100. See the family section for advice on relationships.”

I don’t mean to be disingenuous. I just don’t want to be hypocritical. There are some things I’m good at, and others that I struggle with.

But I did learn from Nana that it’s possible to always love. She cared for me for as long as I can recall, and I know I’ll continue to remember her always.

What Do People Say At the End of Their Lives?

Writing With Adderall: A Personal Case Study
© 2022 The Art of Non-Conformity | Site by Bytegrow Technologies