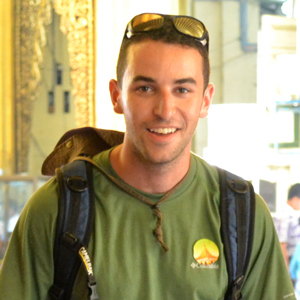 Matt Schwartz began travel hacking in 2011, and last year quit his job for a dream trip around the world. One of his best buys? An NYC to Bangkok flight for less than $45—in Business Class.

I’m a twenty-something taking a career break from Information Systems to travel the world. Traveling alone has been part of my life since 2010, and I decided to leave my job (for a bit – I plan to go return) in early 2014 with a one-way ticket to Bangkok. Since then I’ve traveled through over ten countries.

People I meet wonder how I was able to just quit my job and hit the road. I’d argue the fact that this question exists is systemic of a larger issue Americans have about vacation and work-life balance.

After college I took a three week inter-railway journey through Western Europe. I always meant to embark on a long backing trip, but instead fell into a job and a normal, yuppie lifestyle: buying nice clothes, discussing politics at happy hours – it wasn’t a bad way to live, but travel was constantly on my mind.

Then, I had an “ah-ha” moment during an amazing trip to Tanzania. First, I met a couple on their honeymoon – an around the world trip. They told me, “The only time to go is now.” A few days later, I met a midwestern mother who told me she never let life get in the way of travel.

Both those conversations gave way to me making the decision. Besides, I’ll probably work for the next 50 years. Now seemed like a good time to take a break.

Tell us a story from your amazing Tanzania trip.

Tanzania was the first developing country I’d been to. People lived in such a different fashion there than the world I was accustomed to.

I’d purposefully packed a few things to give away to the porters who were helping us up and down Mt. Kilimanjaro. When we stopped to buy some sugar cane on the side of the road, the old woman running the stand gave us enough cane for 30 people (there were five in our group). I took in her living conditions, and thought of the old pair of New Balance sneakers I had tucked in my bag. I no longer really needed them, and it was a luxury I could have them and a newer pair.

I gave the woman my shoes, and she was elated. The exchange made me start to rethink my dependence on stuff and how sick with consumption our culture is.

How are you paying for this big trip?

Before quitting my job, I saved up a good amount of cash by living frugally—but what made a big difference was learning about travel hacking.

I slowly started applying for credit cards and studying which cards aligned with which alliances. My first real taste of the luxury travel life was when I booked a ticket to London for the Olympic Games on a whim. I upgraded myself to Business Class with the miles I accumulated and had access to a “members only” Chase lounge in the heart of London.

Some other proud booking highlights include:

And I’ll be flying home from this trip to NYC on Etihad Airlines, also in Business Class.

Many people think I’m made of money, but that’s not the case. I mix it up, stay in low-budget hostels after flying in style, and fly AirAsia (a low-budget carrier) with the same ease.

How do you earn points and miles? Which cards to you use?

I started travel hacking in early 2011 and have accumulated over 300k miles. I’m a loyal AA Frequent Flier and Oneworld member, though I’ve also had several flights with Star Alliance.

I’m actually returning home from this big trip with barely enough miles for a domestic round-trip ticket, but that’s okay. I know how to refine my travel hacking techniques and earn more miles.

Tell us about a memorable moment from your journey.

A friend and I rented motorbikes in Vietnam and rode from Hoi An to Hue. The drive was unreal. It featured a beautiful coastline on one side, rolling hills on the other and I remember thinking,”Wow, there was a reason the guys on Top Gear did the same thing!”

Outside of the cities, the highways were easy to maneuver, and the weather was ideal for driving. My buddy and I, both Americans, got pretty lost for about four hours. We were given wrong directions three times by locals, but eventually made it through the Hai Van Pass.

After arriving in Hue, covered in dirt and grime from a journey that took eight hours instead of four, we were pretty stoked to relax and have a Vietnamese beer.

Don’t take any maps or do any research before hand. Just go out to a new area, interact with people, use your wit, and find your way.

Never had stir fry crickets? Well, now is the time. Scorpion on a stick? Sure – be sure to ask for extra chili sauce. Don’t be hesitant and just say yes to (almost) everything.

Where have you been recently?

After finishing my travels in New Zealand, I’m headed to the Maldives to finish up my 13-month trip. On the horizon is probably a trip to England, but there are opportunities to do some mountaineering trips in the future, too.

Stay up to date with Matt on Twitter @mattispalatial.

“We Don’t Know What it’s Like Not to Travel”: On the Road with Sarah Glashegal and Scott Haywood
© 2022 The Art of Non-Conformity | Site by Bytegrow Technologies