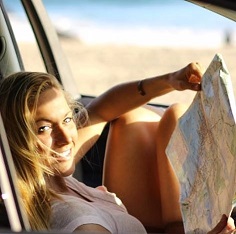 Cassie de Pecol is on a quest to become the fastest woman to visit every country in the world. We sometimes exchange notes about visa issues, long flights, and drinking wine while stuck in no-man’s-land transit zone for eight hours or more.

There aren’t many people who’ve gone to every country. Cassie is pursuing a Guinness World Record (I like those too!) but for me, I wasn’t trying to be the youngest, fastest, or any other adjective. In my case, I did it for myself.

She said something to me recently that I really liked, and I’m sharing it here with her permission. For context, we were talking about the dreaded “What do you do after completing a big quest?” question.

Since I’m in somewhat of a similar position, I can only speak for what I’d do. And for me, it’s not about the journey, it’s about the destination and doing something big, impactful. And for me that’s breaking a record, winning a race or doing way better than I did before, or proving people wrong about something or myself.

Maybe registering for a race or embarking on a specific journey, can be short or long, but something that has a substantial result. Like go somewhere for a weekend and produce something no one ever thought you could produce; video, photos, article, etc. And in the meantime, start to work on something way bigger than yourself or something you’ve ever done.

For me, I think if there wasn’t such a stigma to impress others, there wouldn’t be as much of a push to impress myself—as fucked up as that sounds. Easier said than done, but you can do anything you want to do. Sometimes I think of that guy Ranulph Fiennes, he’s like 78 and to this day continues to break records; travel records, endurance, etc.

I wonder if that’s all that keeps him going in life. Once he made that first attempt that was so amazing, how could he go back to living a mundane life? So he made it a life goal to keep going with the records and expeditions, and maybe that’s how he keeps going. Pushing your own limits in some impactful way and forget everyone else. Just keep carving into something for as long as you can hold out for.

The Journey to Ithaca