Trip Update: I haven’t had a lot of time to post reports from my trip to South America and the Middle East, so while I’m hanging out in transit today, I thought I’d post this report instead of the usual Wednesday work essay. We’ll go back to regularly scheduled programming next week.

Before the plane takes off for the 10 ½ hour flight to Santiago, the LAN Chile flight attendant wants to take my entire food and drink order while we’re still waiting to take off at JFK. I tell her I’ll have the pasta, but I can tell she’s waiting for something else.“Do you want bread with that?” she finally asks. Sure, OK. “Brown or white?”

“Uh, brown is fine.” Dinner is three hours away, but I need to place my order now in great detail.

This conversation goes on for a while in a mixture of Spanish and English. She asks if I’ll want breakfast in the morning, which is nine hours from now. “What kind of cereal? Café con leche or tea?”

I find it amusing that I have to order everything I want over the next 10 ½ hours before we even leave the ground. What if I want a Diet Coke in the middle of the flight—should I page the attendant again to let her know now?

It takes a while to get to Easter Island. Five hours from Seattle to JFK, 10 ½ to Santiago, and five more to the middle of the Pacific Ocean. Thankfully, under the terms of the OneWorld Round-the-World tickets I travel with, each of these long flights counts as just one segment each, the same way that a San Francisco-L.A. flight would be one segment each.

The trick is to maximize value by taking long flights to remote places that would ordinarily be prohibitively expensive to fly to on a single ticket. Later on in this trip I’ll fly from Buenos Aires to Chicago, and then Chicago to Amman, Jordan—once again just one segment each for 10+ hours of flying each time.

So anyway, on to Easter Island.

It’s hard to write about a place like this without using the tired clichés of travel writing. Phrases like “in the middle of nowhere” and “undiscovered” and “the ends of the earth” are overused to the point of becoming trite. People who live on Easter Island don’t think of it as the middle of nowhere, and few if any places in the world remain undiscovered.

But while acknowledging all of that, I may lose the war against clichéd writing when trying to explain Easter Island. It really is a long way from anywhere else. It takes five hours to get to Chile in one direction, and six hours to Tahiti in the other. Those are the sole connections, on just one airline that has four flights a week.

The LAN Chile 767 looks enormous on the tarmac of the tiny airport. The other passengers and I descend the staircase to the ground and walk straight off onto the road. There’s no shuttle bus, and only a tiny terminal for those who have checked bags. We’ve already cleared immigration in Chile, and since I have no bags, I take a few steps from the airplane to the small parking lot.

As I walk away from the tarmac, I realize that if I were to suddenly change my mind tonight or tomorrow and want to leave, there’s no way off the island until the plane comes back from Tahiti in three days. This isn’t like my normal stopovers in places like Frankfurt or Hong Kong, with dozens of flights taking off every hour to countless world capitals.

I’m staying in a guesthouse about two miles out of the only town on the island. Each day of my trip, I walk back and forth at least twice, and the slow shuffle along half-paved roads reminds me another two-mile trek I took recently. A few weeks ago I was in L.A. for a downtown conference, and to save money I stayed at a small motel two miles away. Just as I’m doing here, I walked back and forth each morning and afternoon.

The paradox is unmistakable. Except for the Spanish language, downtown L.A. and downtown Hanga Roa don’t have much in common. There are no buildings taller than a couple of stories here on the island, and you can walk the entire town in fifteen minutes. There is one bank, which I hurry to get to for money changing since they close at 1:00 p.m. every day.

Opting out of the $30 prix fixe menu offered by my guesthouse later that evening, I head out to town in search of food on my first evening. After I ask for the menu (la carta) at a few restaurants, I realize that the guesthouse meal was not overpriced. Virtually everything on every menu starts at $20, and the restaurants don’t look that nice. At first I think I must be calculating the exchange rate wrong, but no—the local beers really are $8 and small cheese pizzas are $24. What is this, Monaco?

I end up getting a tomato and avocado sandwich for $13. I don’t like tomatoes or avocados, but it’s the cheapest thing on the menu. I decide I won’t do much eating until I get to Argentina a few days from now.

My tour around the island the next morning is nice. I learn more about the history of the island, better recounted by Wikipedia than by me here. I visit the mysterious row of 15 moal and stand in front of them for a while. I go to the quarry where the moai were carved. My guide tells me about another moai nicknamed “the traveler” because he was sent to Japan on a publicity tour a few years ago.

The traveler, what a great name. I decide I should have a photo in front of him, and my guide offers to help. While he is taking the picture, I’m wondering if he knows what he’s doing, since he’s pointing the camera away from the traveler moai. He smiles and gives back the camera, which contains all of me and only the very edge of the moai I wanted to be seen with.

I ask if there’s a prison on the island, and my guide laughs. “We have a jail,” he says, “but we call it ‘the university.’” The few prisoners are allowed out to go fishing during the day, and the one guard leaves at night without locking up. There isn’t much crime here to begin with, and when someone is sent to jail, there’s no where to escape to.

Back to the undiscovered part. Here is the thing I’ve realized about hanging out in far away places: they may not be undiscovered in the broad sense, but to any single traveler, they are in fact undiscovered until you see it for yourself.

I realize further on one of my walks to town that even among people who have traveled a fair amount, the overwhelming majority of them almost never come to places like Easter Island. This, for me, is one of the things about long trips to these far away places sometimes known as the ends of the earth—I can walk on this island that most people never give a moment’s thought to, and I can look up at the stars that I have never seen from this part of the planet. I can observe how people live their lives, and here on Easter Island, they live their lives in a hybrid Latin American / Polynesian culture.

Another thing I realize as I write these notes after coming back from town my second evening:

I will never come here again.

OK, it is technically possible that one day I could return. But it’s very unlikely; in fact, the idea seems implausible. This is the kind of place you visit just once. Even though I don’t love it here, the realization that I will likely never return makes me a little sad.

I remind myself that I have one life to live. This is my sole chance to visit this remote island, and I’d better appreciate it while I have it.

Over the next few days, I go back to Chile, then to Buenos Aires for a couple of nights, and then another couple of nights across the water in Montevideo, Uruguay. At the end of the time, I take a bus back to Colonia (two and a half hours), a ferry to Buenos Aires (one hour), and a taxi to Ezeiza International Airport. I’ve cut it fairly close due to misreading my flight time when I booked the ticket a week ago, but in the end I make it with twenty minutes to spare by the time I check in.

I fly out to Chicago overnight, and after hanging out in the Belmont neighborhood for my transit day, I take another overnight flight to Amman, Jordan, and then a quick late-night connection to Beirut, Lebanon. After all the flying, I’m back in the Middle East for the first time in a year, and the second half of the trip begins. 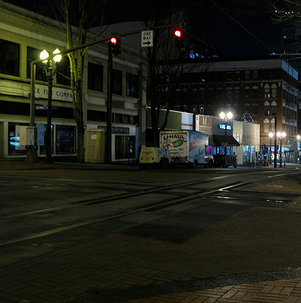 The Perfect City by Personal Standards (Vienna, Austria)
© 2022 The Art of Non-Conformity | Site by Bytegrow Technologies