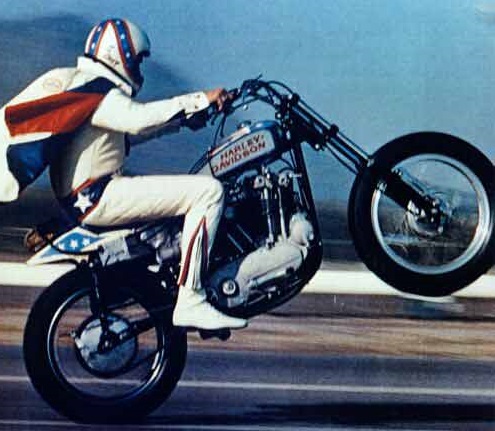 I was only going to watch a few minutes, but I got hooked and kept going. Without spoiling it for you, the greatest lesson I took from the film was that Evel Knievel wasn’t actually that great of a motorcycle rider. He was a decent rider who became an incredible stuntsman, marketer, and risk-taker.

That’s where the fame and fortune came from: he never won a lot of motorcycle races, but he took risks and attempted feats that no one else would dare. Being fearless can kill you, of course, but it also has its benefits.

Knievel had no idea if something would be possible before he promised it. Jump the Grand Canyon?! As a skilled publicity hound, he understand the universal appeal of such a feat right away. Only after he’d announced his ambition did he seek to understand if it could actually be done.

The U.S. government shut down the Grand Canyon plan, so he improvised. After scouting the country by helicopter, he found the Snake River Canyon in Idaho, then leased land on both sides of it. It was his land! No one could tell him not to pursue a crazy stunt that very well might be his last.

Here’s how it went down:

and here’s a more modern look at the Canyon:

Of course, great risk-taking can lead to great consequences. His body became worn down from injury after injury. Worse than the physical harm was the pain of ending the career of being a professional daredevil. “Civilization is a mundane bitch for a lot of people,” one of his friends observed, in what may be the most astute observation ever made about anyone who longs for something more from life.

“He didn’t have a death wish, like a lot of people said he did,” the friend continued. “He had a life wish.”

As you might guess, the story doesn’t end super well. When you spend your life chasing demons and constantly seeking another high, coming back to the mundane bitch of civilization can be quite a downer. But what a life it was until then!

Years later, his son Robby went back to the Grand Canyon and somehow got permission to make this jump.

Like his father’s feats before him, this jump by Knievel, Jr. was fraught with extreme risk. It was also something that he simply had to do, regardless of the danger, and regardless of what anyone thought.

Playing It Safe Is Riskier Than You Think

What Are People REALLY Saying About WDS 2014? (Part II)

New! Sign Up to “Make Your Dream Trip a Reality” (A 30-Day Creative Live Course)

Choose a Long Life, Be Forgotten Immediately Afterwards
© 2022 The Art of Non-Conformity | Site by Bytegrow Technologies