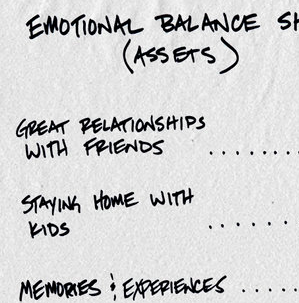 I often enjoy the personal finance columns by Carl Richards. In a recent one, he explains how to create an “emotional balance sheet” to quantify (or at least tally) your non-financial assets.

Carl tells the story of how he and his wife Cori made the choice for her to become a full-time mom, despite the fact that the family would lose more than $1 million in earnings over the next twenty years.

He’s quick to point out that the moral of the story isn’t “all mothers should stay home with their children”—which is good, since presumably many readers would make different choices. The lesson is a) to be clear about your intentions, and b) learn to value non-financial assets.

1. Be Clear About Your Intentions

Carl and Cori deliberately chose to spend more time with their children. They considered the factors, counted the cost, and made the choice.

In the example from the column, Carl and Cori “gave up” $1 million in income over twenty years, but they saw the gain of “Cory being a full-time mother” as a net benefit. Having the family together more often was an asset, not a liability.

Again, the example from the column is a bit traditional, perhaps even stereotypical for some of us. If your situation is different, it might be better to think about the concept as it applies to your own values and relationships.

For me, last fall was fairly rough, with a lot of highs and lows (this summer has been rough, too, but that’s a whole other story). One of the decisions I made out of the experience was to deliberately value my friendships more highly than I previously had. I set a personal goal of writing or calling one friend a day for the whole year.

I don’t know how to quantify or rank these friendships—and I don’t think that’s the point. But somehow, placing more of an emphasis on connecting with people to check on their lives and to share mine in return has value. It’s a non-financial asset that I’d put near the top of any balance sheet, even if it doesn’t have a dollar figure attached to it.

If you like this idea, consider how it applies to your life.

What’s on your emotional balance sheet? 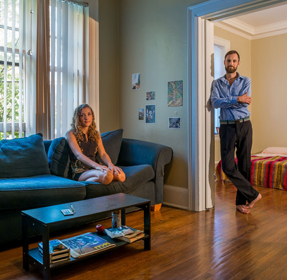 Be Realistic: Plan for a Miracle
© 2023 The Art of Non-Conformity | Site by Bytegrow Technologies