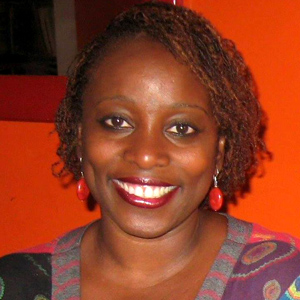 As I wrote in The Happiness of Pursuit, a quest need not be an athletic struggle or travel adventure. I loved this story of how this former medical resident wrote a haiku every day for a year.

I’m Yvonne Whitelaw. I was born in Britain, but raised in Nigeria and the United States. I’m a stay at home mom and former physician. I decided to tweet a haiku a day for 365 days, even though I barely knew what a haiku was and had never actually written one.

Interestingly, the practice of daily haiku writing has helped my ADD. Haikus have trained me to focus and express myself succinctly.

I first heard the word haiku during my medical residency, from which I eventually burned out and left. I knew other residents were writing them, but I never did (between working 80 hour weeks and my infant daughter, I was a little too busy!).

I’m a rhythm guitarist and former drummer, so the 5-7-5 structure not only appealed to me, but stuck with me.

Did anything in particular inspire you to take on a quest?

I’ve never quite felt like I fit in. Bubbly, eclectic, dreadlocks in my hair at medical school – I was boho rock in a preppy world. After I left my medical residency program I felt isolated and had a lot of shame for resigning.

Six years later, I went to WDS and suddenly felt like I belonged. I was surrounded by visionary, positive, creative world-changers who wanted to make an impact. I felt like I was glowing all weekend long. No one was going to make fun of me for being a bleeding heart because they all were, too.

After seeing the speakers, I felt a jolt in my thinking to get out of the box, and suddenly there was fire in my bones to do something.

How much does writing a haiku every day cost?

Financially, nothing. It does cost me time-wise. And emotionally! Putting myself out there and posting a haiku even when it is silly, trite, or just plain awful isn’t always easy.

How do you find inspiration each day to write?

I’ve learned that creativity is a decision. I no longer wait for inspiration to strike. I just decide to write and post. Sometimes, the process of writing actually inspires the creativity. Sometimes I get stuck. Sometimes, it flows. But either way, a haiku gets posted daily.

About 100 days in, I took a break from social media. I was going through what I’d call a “dark night of the soul.” I could sense a calling to go back to medicine as a coach and facilitator for physicians, helping with compassion fatigue, disillusionment and burnout – basically becoming the support I needed in residency that might have helped me succeed.

However, I was having a classic hero’s journey moment and resisting the calling. See, my residency was a challenge because I didn’t have family and friends to help with my baby or my work, let alone my emotions. And I thought I was the only one in my program to be struggling.

I’ve since learned that there is a silent epidemic in medicine. About 400 physicians commit suicide every year (which is equivalent to an entire medical school closing down annually), presumably at least partly due to everything I was experiencing.

With all this going on in my head, I needed time away from the noise, to get really clear about what I needed to do—which meant stepping away from the haiku project for a month, too.

Stepping away from social media was actually a great thing. It allowed me time to see clearly what I could do to help. Rather than go back to residency, I realized I’d rather help physicians at all levels thrive in medicine. I decided to get certified as a coach in positive psychology.

I kept writing haiku throughout this time—in fact, I wrote more than one a day!—and when my month break from social media was up, I again felt excited to continue on my quest.

Is there an encounter that sticks out in your mind?

Dr. Pamela Wible, a well-known physician who has been working on physician suicides, liked one of my haikus that I had posted on Twitter. She kept tweeting and retweeting it. It sounds like such a small thing, but this was actually huge.

I’ve often compartmentalized myself, keeping my artistic nature and medical interests separate. Dr. Wible’s recognition of my haiku made me feel it was possible to be all parts of myself, without hiding. I don’t have to be the serious expert. I can be creative, authentic, and vulnerable, and still make a difference.

What was that haiku?

To those it needs most

Now that you’re combining the two, do you see any connections between haiku and health?

Brene Brown says that the way to get from your head to your heart is through creativity. Sometimes we get stuck in our heads and don’t live the way we know we want to. She says by practicing our creativity, we heal our hearts.

Haiku, or any creative endeavor, gives you something to look forward to – and that in itself gives you hope. A creative endeavor gives your life meaning,  gives your a sense of service and making a difference in the world. And the more meaning you have in your life, the less likely you are to not want to live.

Do you have any advice for how to begin a creative quest?

Be prepared for the quest to become a living thing.

I know that sounds weird, but here’s an example: I usually get quiet and mutter a prayer before I write. I ask, “What do you want to say to the people?” and then I write. Whenever I try to manipulate or control or change the message of a haiku, it never works. The writing just stops. But if I just go with whatever comes to me, it flows. I can edit, but I can’t see to change the message.

Don’t worry about the quality. Just show up daily and consistently.

You might think you should wait til inspiration strikes before you write, but I’ve found that inspiration is usually waiting for me to show up with a pen in hand.

I don’t feel like my haikus belong to me. They belong to the people with whom they resonate. Many times I have been tempted not to share a haiku because I judged it as trite, only for it to end up getting a ton of accolades (usually in the form of “Likes” or “Retweets” – this is a social media project after all) I never expected.

I finish out the year writing haiku, and then focus on my physician coaching practice.

Surfing the Entire West Coast of the Americas: A Quest of Love and Discovery
© 2023 The Art of Non-Conformity | Site by Bytegrow Technologies