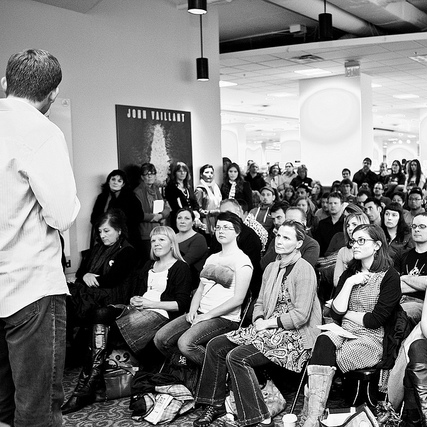 Thanks so much to everyone out there who was a part of the 63-city Unconventional Book Tour, which just wrapped up in beautiful Vancouver last weekend. We’re working on a bigger project to document the whole experience for everyone, but for now I just wanted to express my gratefulness.

While I’ve been touring, I’ve been learning a lot more about the publishing industry. People have asked me, over and over, “What’s the verdict on the tour? Was it worth it?”

Worth is a curious word. When some people talk about worth, they’re obviously referring to money. Technically speaking, it wasn’t “worth it” to go to every state and every province to meet readers. I paid more for the tour than I was paid to write the book.

But if we look at worth in terms of value and adventure, it’s a much easier conversation. Under that analysis, the verdict is that it was totally, 100% worth it. I would do it again tomorrow. Next time I want to do a 7-continent book tour.

Most authors don’t tour at all now, or if they do, there are all kinds of conditions—“I’ll go to your city if you agree to purchase 200 books in advance” is one common condition. Well, no one bought 200 books from me in Fargo or Little Rock or Newfoundland or any other number of small stops, but they were incredibly rewarding visits regardless.

Speaking of the publishing industry, I hear a lot of fairly negative conversation about its current state. Perhaps I’m still naïve about the process, but if I’m naïve after four months of touring 63 cities, I’m not sure what would cause me to be less enthusiastic. You mean I get paid to write another book? I’d do it for free. (Don’t tell my publishers.)

Print books are dead? I signed thousands of this one on the tour, and translations in a dozen languages will be going out all over the world this year.

Book readings are boring? At ours we had cupcakes, afterparties, liquor (thanks, Houston), short talks, and long conversations. Mostly, we had fun, amazing people who took the time to come out and make it a much better experience for all.

So yes, it’s been great and I’ll do it again. If you love something, you have to protect it. That’s what I intend to do wherever and however I can.

Thanks again for being part of the journey, either physically or virtually. Tour photos (from many stops) are here. For everyone outside North America, I hope to head your direction at some point as well.

Always choose adventure. It usually works out very well, and if it doesn’t, well, at least you had the chance to go to Fargo.

Strategy, Tactics, and the Plan for the Next 97 Days