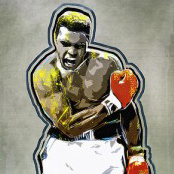 Tomorrow is the beginning of Black History Month in the U.S., where we celebrate the achievements of African Americans and honor our country’s culture of diversity.

Last year I wrote about Malcolm X, one of my personal heroes and a great example of non-conformity in the face of relentless pressure to back down. This time, I wanted to look at the life of Muhammad Ali, born as Cassius Clay in Louisville, Kentucky.

Ali was firstly a boxer—the Olympic Gold winner for the U.S. in Rome (1960), and later the World Heavyweight Champion. He said he was the greatest and he was. But Ali also stood for something more than boxing, and was willing to stand for it in even if it meant losing everything else he had worked for.

At the height of his career in 1967, Ali refused to be inducted in the military and fight in Vietnam, making the famous pronouncement: “I ain’t got no quarrel with the Vietcong. No Vietcong ever called me nigger.”

In the context of the time, to refuse the draft and call to national action, especially as a black man, was an act of disobedience that brought immediate social and legal consequences. Ali was arrested and prosecuted by the U.S. government, stripped of his title by the boxing commissions, and left unable to work for more than three years.

Do you believe in something enough to cope with public censorship, the risk of imprisonment, and the loss of your ability to work? What if you had the opportunity to earn millions of dollars if you just didn’t protest and went along for the ride?

I know I’m not “the greatest,” because I’m not sure I’d always make the right decision. That’s why I enjoy studying the lives of famous non-conformists like Muhammad Ali.

In lighter moments, Ali was also the original rapper, conjuring rhymes on the fly and serving as his own best press agent. You can see him at work here in this media conference:

Here’s another video (this one can’t be embedded, unfortunately) with his greatest recorded sustained effort at poetry, and here are some of my favorite Ali quotes:

“I am the greatest. I said that even before I knew I was.”

“If Ali says a mosquito can pull a plow, don’t ask how. Hitch him up!”

“If Sonny Liston dreams he can beat me, he better wake up and apologize.”

“I’m so fast that last night I turned off the light switch in my hotel room and was in bed before the room was dark.”

If you have a bit more time, watch this documentary for a more serious look at Ali:

Finally, here’s one more Ali quote I especially like:

?”It’s hard to beat a guy when he’s got his mind made up that he’s going to win.”

Last week I shared this on Facebook, and someone wrote back: “Who cares about some fighter?” Ah yes, when you stand for something, plenty of people won’t care and they won’t get it. But fortunately, plenty of other people do, and the world is a better place for those of us who are inspired.

Muhammad Ali was always more than a fighter. I give respect!

Happy Thanksgiving from the Homeland