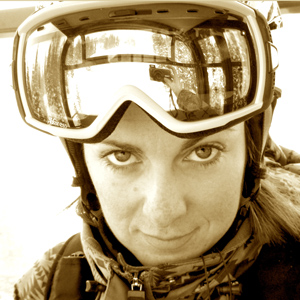 One time I went skiing for an hour, and then I went for hot chocolate in the lodge. Steph Jagger, whom I met at a book event in San Diego, went skiing and didn’t stop until she’d gone more than four million vertical feet.

I’m Steph Jagger and I currently live in California where I run an executive & life coaching practice. From July 2010 to May 2011, I circumnavigated the globe in search of snow.

While traveling I skied 4,161,823 vertical feet, breaking the world record for most vertical feet skied in a single year. My original goal was 4,000,000 feet—but when I found out about the record (approximately 8 months into my trip) I tacked on a few extra feet!

In 2008, I was discontented with a life everyone said I should be happy about. And then, I noticed a blue tin sign. During a day trip with co-workers at Whistler, we rested on the chairlift and my excitement of the moment overtook me. I blurted out the most cliché thing that any weekend-warrior could: “This makes me want to quit my job and ski all around the world.”

Silence followed. Then chuckles, and full blown howling. “What’s stopping you!?” my co-workers snickered between gasps of air.

At the top of the lift, I turned my head and saw a small blue sign, one I had seen a million times before. It shows a stick figure raising a bar and reads, “Raise Restraining Device.”

I knew it then. I needed to set my guns a blazin’, raise the metaphorical restraining device, and take the leap.

Skiing is freedom. I ski so I can tune out and tap in. I can clear out the voices in my head and find the one that’s ringing truest.

How much did your quest cost and how did you pay for it?

It cost exactly $71,238.07. I had a detailed budget that accounted for ski passes, flights, accommodations, and equipment. I saved about $30K, and for the rest I took out on a line of credit against my mortgage.

My parents thought I was crazy, but that’s what good parents do. I’ve never regretted the choice for a minute.

Tell us how you dealt with a low point in your journey.

I’ll give you five:

1. When my parents didn’t initially buy-in. To get over it, I skied.

2. At the end of the first season (there were two ski seasons), I was way behind my goal and began to question if I was going to make it. To get over it, I skied.

3. I lost one ski in the backcountry in Japan. It was a very dangerous day and it shook me up a lot. To get over it, I skied … with one leg, on one ski.

4. I got sick in Europe and felt very lonely. To get over it, I skied.

5. Re-entry back to normal life was also tough. To get over it, I cried.

My parents not backing me at first was hard, but I learned something important: I couldn’t rely on other people for permission to do what I wanted. I learned that if I really believed in something, then it was up to me to make it come to life.

As for why I turned to skiing to solve almost any hard moment, Joseph Campbell says, “Find a place inside where there’s joy, and joy will burn out the pain.” Skiing is what I love, and I stuck to it in hopes that it would move me forward.

Other than crying at the end of my quest, it worked every time. I just put one foot (vertical) in front of the other and kept going.

Did you meet anyone interesting?

I came across a fair number of “Jedi masters.” These people were strangers who showed up at exactly the right moment to give me what I needed.

For example, when I was in Japanese backcountry, I met another Canadian girl named Tree, who helped me get my gear safely to the top of the mountain, then helped me ski out after I lost a single ski on the way down. I’m not sure what would have happened if she hadn’t been there.

Others gave me camaraderie, others massages, a few offered beds or hotel rooms, still others gave their time. I always felt supported in some way, and I was given what I needed at just the right time.

Has anything about you changed since your quest?

I learned not to underestimate myself. I went from being a participant, a do-what’s-expected kind of gal, to a woman who really understands what it means to live an unrestrained life. I no longer fear changing everything and expecting more out of life, even if the life I have is “pretty good.”

The biggest takeaway wasn’t that I became a new person. It’s that I became a juicier, more concentrated version of myself. The quest gave me the validation I needed to leave behind the parts of me that were no longer useful and to really grab hold of what my true strengths, talents and gifts are.

What advice would you give someone starting a quest?

You don’t put “ski 4 million feet” on a to-do list. Instead, you plan to: train, save, do lunges, book hotel rooms, research flight options, call a friend who knows a friend in Switzerland, look into visas, make a budget, source equipment, take avalanche course, etc.

2. You’ll get what you need along the way.

Anything you don’t already have shouldn’t stop you. Hearing I was worried about not being in good enough shape, a friend told me,”You’re getting held back by thinking you’ve got to be super fit to do this. You’ll get plenty fit while you’re on your trip.”

In the ten months I was gone I:

That is always unfolding. At first, it was dodging this question. Now, it’s writing a book, building a business, and sharing what I’ve learned with others. After that, I could easily see a quest in my future that involves pinot noir or raspberries or dog snuggling.

Keep up to date on Steph at her site, Bird String Coaching, or follow along with her on Twitter @Steph_Jagger.

Peace Corps, Gateway to the Travel Bug: On the Road with Michelle and Jedd Chang
© 2022 The Art of Non-Conformity | Site by Bytegrow Technologies