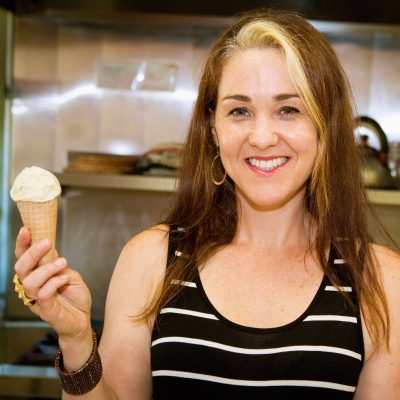 A stay-at-home mom turned foodpreneur, Sundara Clark called on years of experience in the industry to fill a hole in the dessert aisle. After getting a lactose intolerance diagnosis for her daughter, Sundara set to work creating an organic, vegan, paleo gelato that her daughter could enjoy.

After five years as a stay-at-home mom, I was ready to jump back into the economy. Only problem was, in Humboldt, California where I was living, jobs were few and far between. Since I wasn’t inclined to be a lumberjack or marijuana farmer, I knew I was going to have to strike out on my own. I just wasn’t quite sure what that would look like yet.

I’ve worked in all parts of the food industry – served in restaurants, made fancy desserts, and done sales and purchasing for a food distributor. While I was growing up, my mom worked as a distributor for a then-fledgling company called Odwalla. In retrospect, it makes sense that I got into the food business, but it actually started with a bit of bad news.

Turning lemons into lemonade or cashews into ice cream

My daughter received a lactose intolerant diagnosis, which was devastating news for a five-year-old who loved ice cream. This prompted numerous vegan ice cream tastings, all to less than stellar reviews. The coconut ice creams just tasted like coconut, not ice cream, and a lot of the soy-based options had a ton of emulsifiers and additives that I wasn’t thrilled with my daughter eating.

So I got to work in the kitchen. The result was a cashew based, vegan, paleo gelato that I was happy to have both of my girls eat.

I initially made the gelato just for my daughter so she could still eat ice cream, but, with a little encouragement from friends and family, I realized this could be the source of income that I was looking for. And when my carnivore dad said he liked it, I knew I had something good! Thus Vixen Kitchen was born.

I started selling at my local farmers market, which lead to placement in several local grocery stores and co-ops. My biggest victory to date has been making it into all the Northern California Whole Foods stores. It’s been three years since I first started selling at farmers markets, and at this point I’m barely keeping up with the demand from my little commercial kitchen.

It takes a village to make ice cream

I didn’t go from the kitchen in my own home to Whole Foods on my own. Not even close. In addition to getting tons of help from friends and family, I got immeasurable support from a business incubator nonprofit called Humboldt Made. They support local businesses in getting their products beyond the borders of Humboldt county.

In the beginning, Humboldt Made helped with everything from photoshoots to social media promotion to monthly meetings. I was able to pick up the phone and call another small business owner and ask them how they had handled a specific challenge. Humboldt Made also got me to Expo West, the largest health food trade show in the United States. I wouldn’t be where I am today without their help.

The taste of success

I started this whole adventure, with the hope of providing my daughter with ice cream she could eat. I didn’t want her to miss out on childhood summers eating ice cream in the evenings!

Since those early days, it’s turned out to be so much more: a business opportunity for me, and an entirely new type of gelato for vegans and dairy-free folks. My dreams of getting my gelato into local stores have evolved as I continue to reach my goals, and now I have my sights set on the entire West Coast.

Regardless of how this all plays out, I have every kid’s dream job—I make ice cream!

“Turning 50 Is Extremely Liberating”: One Woman’s Path to Her Dream Job

Teaching by Example: A Father’s Take on Adventure and Giving Back

Connecting the Dots to a Dream Job in the Hemp Industry

Peace Corps, Gateway to the Travel Bug: On the Road with Michelle and Jedd Chang
© 2023 The Art of Non-Conformity | Site by Bytegrow Technologies