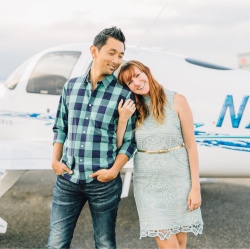 I’ve mentioned the Southwest Airlines Companion Pass a couple times over the years. In short, if you’re able to get it—by earning 110,000 qualifying points in a year—a companion of your choice can fly with you for nearly free (just pay the taxes on their ticket) for an entire year.

Here’s a fun story from Annabelle and Christian, two students from last year’s Dream Trip course, that illustrates two key points about it:

2. You can travel hack your way to almost all of the 110,000 qualifying points

Check out the Q&A with Annabelle below.

In Colorado for a photoshoot for their podcast, Swept Together.

When did you qualify for the SW companion pass?

Tell us how you got the 110,000 points to get the pass (credit cards only or a combo of credit cards and something else)

A: My fiancé Christian signed up for both the Southwest Plus and Southwest Premier cards through Chase, which each came with a bonus of 50,000 points after hitting a minimum spend of $2,000 per card. We paid $4,000 worth of student debt with the two credit cards, $2,000 to each card, and then paid off the balances. That got us the two 50k bonus points (100k total) plus 4,000 points from charging on the card.

In addition, Christian travels for work and, knowing that we were shooting for the Companion Pass, he started traveling exclusively on Southwest when visiting clients. He accumulated the last 6,000 points by flying, which put us at the 110,000 points we needed to qualify for the Companion Pass. So it was a combination of credit card bonus, spending, and actual flight miles.

Where are you most excited to go with your companion pass and who are you going to take?

A: Since getting the Companion Pass, we’ve used it 14 times, to travel to 7 different states. We’ve mostly used it to visit each other’s family, and also to accompany each other on work trips. I’m most excited to use the Companion Pass to travel to Belize, which is where we’re planning our wedding this fall. Neither of us have been to Belize before, and although we’ve traveled internationally together a few times, this will be the first country that’s new to both of us. We are companions for life so we are obviously each other’s companion on Southwest flights!

Do you have an example of how this saved you a bunch of money of a flight?

A: Since we have the Companion Pass and had accumulated 110,000 Rapid Rewards points, we’ve essentially not had to pay for a flight since May 2016! We’ve used up almost all our points, but we’ve been able to travel so much more than we would have without it.

As an example of how much we save, we decided last minute (two weeks out) to take a location-scouting trip to Belize before we booked a wedding venue. It would have cost us about $1,400; however, because we had points and the Companion Pass, it cost 36,000 points plus the required government fees of about $160.

Do you have a favorite thing about Southwest? (did you fly them a lot before you got the companion pass?)

A: I had never flown Southwest prior to Christian getting the companion pass. We used to be elite members on United and, while the experience is different on United vs Southwest, we both feel that the ability to fly for “free” justifies the switch to Southwest and the Companion Pass. While we got economy plus seating, free checked bags and priority boarding on United, we started “hacking the system” with Southwest which makes the boarding process smoother.

Since we fly together and middle seats tend to go last, one of us will pay for Early Bird Check-in while the other checks in normally 24 hours before. The person with Early Bird takes our larger carry-on bag (we typically only travel with one bag between us) and snags a window seat with overhead bin space, then the second person can simply walk on and grab the adjacent middle seat without any stress.

We’ve also noticed that, on average, Southwest flights tend to be cheaper both in dollars and in points. At United, for example, the cheapest one-way flight using points is 12,500 whereas, on Southwest, we’ve gotten away with using up a minuscule 5,000 points. Now, we fly exclusively on Southwest for domestic travel.

Do you have any idea of how much money you’ve saved (or project you will save) by having the companion pass?

A: The Companion Pass alone has saved us 50% per flight we’ve taken on Southwest, even without taking into consideration the use of points. So, assuming flights have been around $250 per person (roundtrip) and we’ve taken 8 flights on Southwest saving us a total of about $4,000 so far since we used points to book our flights. Of course, it cost us $99 for each card (annual fee) so the total savings is about $3,800 in the last seven months.

Plus, we still have a year to use the card and book even more travel! While we don’t have an exact number for the savings we’ve incurred, the increased access to travel that the Companion Pass has given us is priceless.

What a great success story! Southwest doesn’t usually work for my travel needs, but I do end up flying them at least a couple of times a year and usually have a good experience. Are you working on your Companion Pass?

Check out Annabelle and Christian’s “Story of a Modern Romance” in blog and podcast form, and follow them on Instagram as they hop around North America.